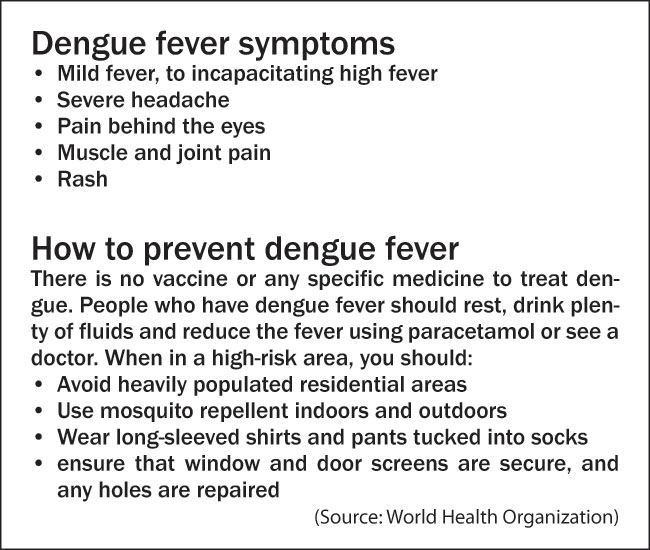 CHITWAN, Oct 19: As many as 219 people have been infected with dengue virus in Chitwan district in the last two months alone. Ratnanagar Municipality of the district has been hit the hardest.

“About 80 percent of the 219 dengue patients in the district are from Ratnanagar,” informed Ram KC, vector control inspector at the District Public Health Office (DPHO), Chitwan, adding that ward number 2 and surrounding areas of the municipality have been affected the most.

Dengue, a vector-borne viral infection, is transmitted by the bite of an Aedes mosquito infected with one of the four dengue virus serotypes. The disease affects infants, young children and adults alike. This mosquito is usually active at night, but doctors have urged everyone to stay safe from mosquito bites even during the day.

Many a time, symptoms of the infection are mild and can be mistaken for flu or viral infection, which not only prevents patients from seeking medical treatment early, but also risks taking wrong medicines. Doctors have urged everyone not to consume medicine for fever without consulting them first, arguing that the delay in treatment or wrong treatment can even cost life. The dengue infection is considered non life-threatening if it is diagnosed early.

“We have mobilized Tole Sudhar Samitis to spread awareness about the infection through various campaigns,” said Tejendra Lamichhane, chief of the social section at Ratnanagar Municipality.

According to KC, the DPHO has initiated a campaign to seek and destroy mosquito larva. The campaign is operational in ward number 1, 2, 3, 4, and 12 of the municipality.

“Seek and destroy is the most effective way to control the infection,” said Narahari Sharma, public health officer, at the DPHO. “Aedes mosquito can lay its egg anywhere, even where there are just a few drops of water.”

According to the DPHO, anyone who have suspicion of dengue infection can visit Bharatpur District Hospital and Bakular Hospital of Ratnagar for diagnosis free of cost.

An assessment team from the Epidemiology and Disease Control Division (EDCD) under the Department of Health Services (DoHS) is set to visit the district for inspection.

BHAIRAHAWA, Oct 24: Dengue fever is fast spreading in Bhairahawa. During the last one week alone 27 patients were admitted at... Read More...

CHITWAN, Aug 20: A teenage girl has tested positive for dengue in Chitwan district which has been battling with the... Read More...

One dies from scrub typhus in Chitwan, over 100 people infected with swine flu