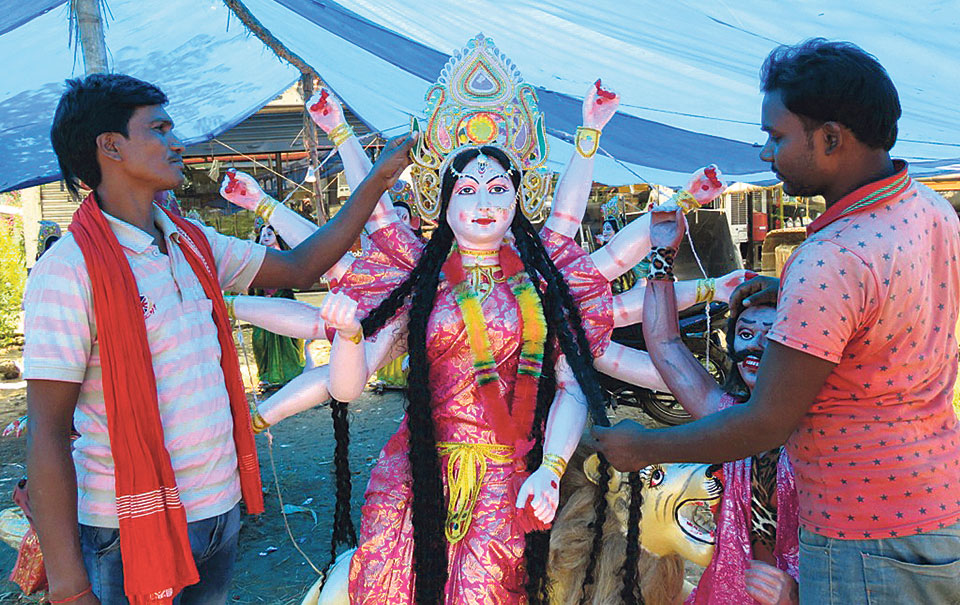 “There is high demand for idols of goddesses during Dashain. No matter how much we make, all are sold,” he said. “I had no time to even blink my eyes during the last three months. It was very tedious but it was exciting as well,” he added.

Pandit is a local of Radhemai village of Birgunj Metropolis-16. During the last three months, he stayed in Kathmandu and Chitwan to make the idols. Earlier, he made idols for Bishwokarma festival, and later for Dashain. Now he is free, he says, as the idols that he made have been sold.

Making idol of clay, creating it and giving the finishing touches is a very tough job. It needs a great deal of attention, devotion. According to Pandit, it took many years for him to learn this skill.

“It became my profession from the age of 11. I learnt it from my very early childhood,” he narrated.

Pandit did not learn pottery through his ancestors. It came his way since he landed in Calcutta of India with his brother while still a small child.

“There in Calcultta I learned this art. And I developed immense love for this work,” he said. Pandit not only makes clay idols but is also skilled at idols and utensils from cement as well.

Earlier, such materials were in demand only in India. Over the years, however, demand for it has been growing in Nepali markets as well, Pandit said. Similarly, idols of God Bishwokarma also are in high demand, he said.

Pandit’s team made around 150 idols in the three months. Over half of those were that of God Bishwokarma. “It has been six years since I have been coming to Narayangarh and Kathmandu as the Bishwokarma festival and Dashain approaches. I take my team along,” said Pandit.

He uses the paste of clay and hey to make idols. Then he uses bamboo sticks and other raw materials to bring idols to proper shame. It generally takes three days to finish an idol. “Even if you work very hard, it does not take less than three days. It has to be painted and dried properly,” he said.

“They want both lasting and less lasting type of idols. We prepare those accordingly. As per some culture or ritual, idols of goddesses are settled in rivers as soon after worshipping it,” he informed.

Pandit’s ‘vacation’ is not going to be long anyway. After a few days of rest, he is going to Gorakhpur to extend hands in making idols of Saraswati and other goddesses and gods. Such are ‘casual’ idols, always in demand.

“Idols of Laxmi, Saraswati, Durga and other gods and goddesses are always in demand in India. Right after Dashain is over, I have to go to Gorakhpur where I make those idols,” he stated.

Pandit is one among dozens of potters who land in Chitwan ahead of Dashain. Potters from several areas and even beyond border come to Chitwan for this reason. According to Shyam Patel of Bhawanipur of India, it has been a decade since he has been working in Nepal every Dashain. His station is not limited to just Chitwan. He goes to Gorkha, Rupandehi and Palpa among other districts for making and selling idols.

“It has been full ten years I come here every Dashain. I go to many places. I work as per the order of customer,” Patel said. Patel has experience of making clay images of even animals. He feels he is quite skilled in that too.

“No matter what they demand, I try to satisfy customers. But sometimes, it is hard to understand what customers exactly want,” Patel remarked.

“The boys with me work hard. It is not possible to get work done without their help,” he said. “Nowadays, people are going experimental. Even for idols, they want eyes, hands, legs moving. For that we even fit idols with electronic devices that aid the idols make movements,” Patel informed.

Not only electronic devices are fit in clay idols, but the demand of electronic idols is also on the rise. Professionals like Patel and Pandit perceive this as a treat to their profession.

“If machines are used to make idols, we will be displaced. Along with that idols made by machines won’t have the liveliness that potters infuse in idols,” Patel opined.

DOLPA, Aug 31: Smugglers are targeting precious idols at the monasteries of Upper Dolpa.  Locals say they are worried with... Read More...

KATHMANDU, Dec 15: Police have recovered 10 idols of different gods and goddesses from a room of a third gender. Read More...