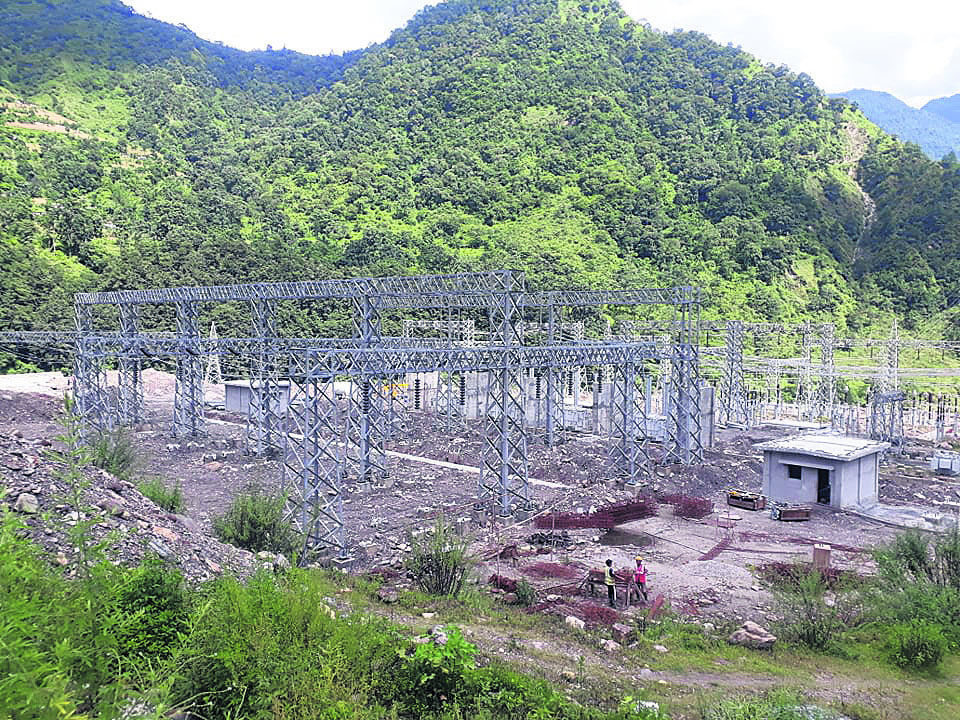 The under construction sub-station of 220 KV capacity, at Annapurna Rural Municipality-3. Photo: Republica

MYAGDI, Aug 31: The testing of structure and equipment of Ghalemdi River Hydropower project located at Narchyang of Annapurna Rural Municipality-4 in north Myagdi has completed. After three successful testing, the project of 5 MW capacity is ready to generate electricity.

Likewise, 90 percent work of Mistri River Hydropower Project with capacity of 42 MW has been completed. This project is also located in Narchyang. All the equipment has reached the project site, and it has been targeted to finish the project in four months. The work for tunnel, intake, and powerhouse has been expedited.

According to the chairman of the Ghalemdi project Kishor Subedi, the electricity produced by Ghalemdi is ready to be connected to the transmission line. But the delay in construction of the 220 KV sub-station is delaying the project's works, he said.

"Test production has been completed, however, the work for commercial production is yet to be started," said Subedi. Because of delay in the sub-station work, it will take one year to supply electricity as per its capacity.

"There is no meaning of producing electricity without the completion of sub-station. So we are carrying out civil works at the moment," said Chudamani Niraula, engineer of Mistri River Hydropower Project. "Before construction of the sub-station, our electricity will go wasted."

Meanwhile, the chief of the Ghalemdi sub-station project, Chandra Kumar Ghosh, stated that 75 percent of the sub-station works have been completed. “We have managed alternative facility for Ghalemdi. We will complete the project within November," Ghosh said.

According to him, station works under the transmission line has been rapidly going on in Dana of Myagdi and Kushma. He said that local people have been creating hurdles in the work of six towers, at Pokharebagar of Annapurna-6.

The locals had been protesting against the high-tension lines above their settlement. As Pokharebagar has been established as the market, there is no immediate alternative due to which the work has been paused. The 42 MW power from Mistri River, 5 MW from Ghalemdi River, and 13.5 MW from Thapa River at Mustang will be connected to the central grid, apart from an additional 100 MW from different under-construction projects in the district.

Transportation comes to a grinding halt in Myagdi

BABIYACHAUR (MYAGDI), July 3: Regular transportation in the hilly district of Myagdi has come to a grinding halt due to... Read More...