Deals with China will be in line with national interests: PM 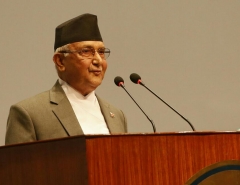 Focus on the implementation of past agreements

KATHMANDU, June 19: Prime Minister KP Oli, who is leaving for Beijing on a six-day official visit at the invitation of his Chinese counterpart on Tuesday, has said that Nepal will reach some key agreements with China keeping its national interests at the center.

Addressing parliament to officially inform the House about his visit to the northern neighbor, Prime Minister Oli said that the main objective of his six-day visit is to further expand and strengthen bilateral cooperation between the two countries. “The bilateral agreements and understandings that Nepal will reach with China during my visit will be in line with Nepal's national needs, keeping national dignity and sovereignty of the country at the center,” the prime minister told parliament.

Prime Minister Oli said that his visit to China will dwell largely on the implementation of various framework agreements reached with China during his last visit in March, 2016. “The agreements and understanding reached during my last visit not just remind our glorious history and traditional friendship with China, but also set our journey in the future,” he said.

In his seven-day visit to China in the backdrop of India's unofficial economic embargo against Nepal back in March, 2016, Prime Minister Oli had signed 10 different bilateral agreements on free trade, transport connectivity including cross-country railway, financial cooperation, and transit facilities through China. But as Oli's government was ousted shortly after his China visit, all these agreements were thrown in the back burner after the successive governments led by Pushpa Kamal Dahal and Sher Bahadur Deuba did not show any interest to implement those agreements.

Prime Minister Oli also said that his visit will focus on the implementation of the agreements that have fallen in national priority while leaving other issues for discussion later. “We will focus on discussing issues like how China can help us; what we can expect from China and in which modality does it want to help us,” he further said.

Stating that Nepal had already decided to be part of the China-led Belt and Road Initiative (BRI), Prime Minister Oli said Nepal aspires to share the prosperity China has achieved and enhance connectivity with China under the broader framework of BRI. He also said that agreements to open new entry points and build a few new north-south corridors will be reached during his visit.

Oli is also scheduled to call on Chinese President Xi Jinping. “In the context of these agreements, there will be a courtesy call on the Chinese President. I will put forth Nepal's perspectives and issues of national interests during the meeting. I will focus on issues that could help strengthen Nepal-China relations,” the prime minister further said. “Discussions will be held with the Chinese premier on these issues.”

Prime Minister Oli is scheduled to hold delegation level bilateral talks with his Chinese counterpart Li Keqiang and also call on senior Chinese leaders. Besides various other engagements, Prime Minister Oli on his way home is also scheduled to visit Lhasa, the capital city of Tibet Autonomous Region of China and hold meetings with provincial leaders.

Will seal some deals with China to open additional corridors: PM Oli

KATHMANDU, June 18: Prime Minister KP Sharma Oli has said that he will sign some bilateral agreements during his China... Read More...