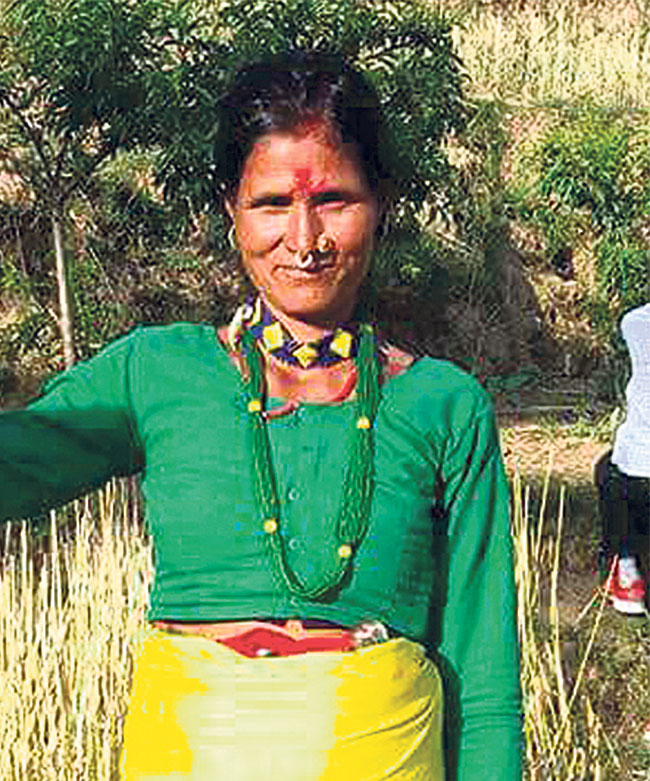 Mana Sarki, member of ward 9 of Naraharinath Rural Municipality of Kalikot, died a few hours after being beaten up by her neighbors on Saturday. Photo: Pabitra Kumar Shahi/Republica

KATHMANDU, June 6: She was fine until four o'clock on Saturday afternoon. What happened next took away her life. Ward member of Narahari Village Municipality - 9 in Kalikot, Mana Sarki was a mother of six, and she leaves behind a family devastated by their loss. She was 'killed by neighbors' and her household is in tears. Police though are 'not yet in a position to pronounce whether it was a murder or not' .Mana and Kammar Shahi were into a torrid affair, according to locals. After it became an open secret, the locals intervened. A well-meaning 'panchayat' tried to resolve matters. The two were told to keep apart and the matter was considered closed, according to another local, requesting anonymity.

Seven years on though, 'they were still in touch'. As they were close neighbors as well, it was not hard for them to meet. "Shahi's children were not happy about this. They had taken it very badly in fact," the source said.

On Saturday, Mana was returning home from the fields when she was set upon by Shahi's daughters. The daughters (Rajendra and Shrijana Shahi) have stated to police that they had caught her red handed in a physical relationship with their father. And they took matters into their own hands. They are now in police custody following a FIR filed by kin of the deceased.

According to Kalikot Police District Chief DSP Subhas Bohora, they will be able to speak clearly about the case only after the postmortem report is in. "The body was sent for postmortem only today. There is no forensic lab here and the body has to be sent to Kathmandu. It will take a few days for the report. We cannot pronounce it a murder right now," he said.

My mother had gone to work in the fields and was returning home. When we heard her screaming at around 9 p.m., my brother and I rushed out to her. We found her being beaten up by Rajendra and Shrijana Shahi. We tried to stop them. My brother said, "Why are you beating my mom, stop it". He tried to snatch away the sticks from their hands. They said, "Get lost you dum (low caste)" and continued beating her. In the course of the struggle, we managed to get hold of her and brought her home. After around half an hour, she breathed her last.

I don't know anything about any 'affair' between my mother with their father. My mother was a very bold woman. She always inspired me to study hard and stand on my own feet. My elder brother was not at home when the incident happened. My father had last come home two months ago from India where he works. We could not report to the police immediately. They beat up my mother so bad she did not survive . Had we rescued her a bit earlier, she may have lived. Rajendra and Shrijana beat her mercilessly.

(As told to Republica by deceased's daughter Rangita Sarki, 16)

According to a son and a daughter of the deceased, they were clueless what to do when their mother died right in front of them. Their father and an elder brother were away from home. Only after they returned recently did the family move to seek justice.

Meanwhile, DSP Bohora informed that police rushed to the village, which is a nine hours walking distance, the very next day. Public inquiries were made.

"Police cannot act without a FIR being filed. It was filed only today and investigations have now started," he said.

When such an incident involves Dalits, two different forces come into play. While one is keen to give it a 'caste color' and make it look like discrimination against lower castes, and the other tries to dismiss the matter for fear of being dragged into controversy. "This case has been no different. But our duty is to be factual and fair. No one can thrash or beat up anyone, let alone commit murder, no matter what the excuse. But, terming it a murder before the investigation is over is not right. Let's wait for the forensic report," said Bohora.

Sarki had been picked as ward member by the CPN-UML under its quota. She would always speak up for the Dalits and marginalized, and 'high caste' folks people were not happy about this, according to her daughter.

Ward member dies after getting swept by river

DADELDHURA, August 21: A ward member has died after getting swept away by the Puturu river at Parasuram municipality, said police. Read More...

KALIKOT, June 7: Terming it as a murder and nothing else, Dalit activists in Kalikot have demanded due action against the... Read More...