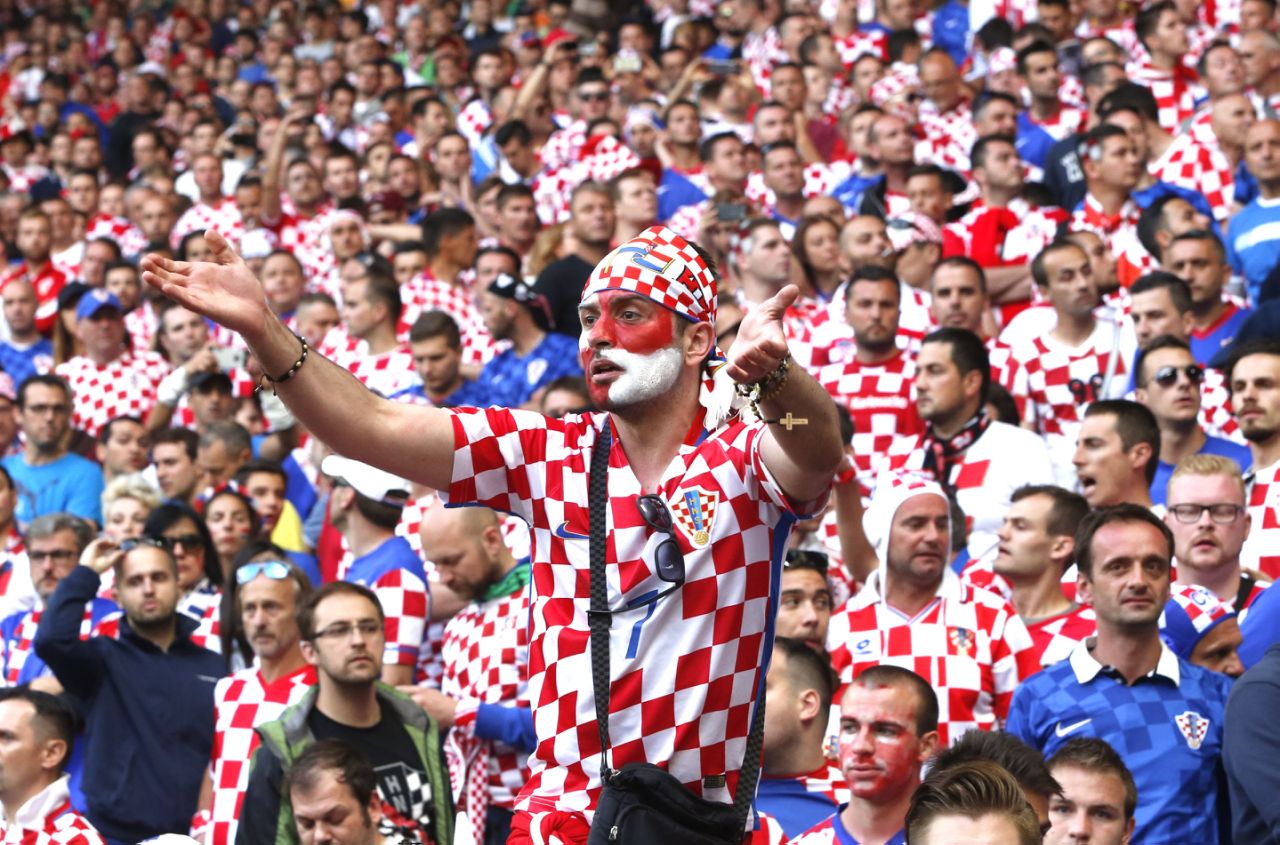 SAINT-ETIENNE, France, June 18: The Czech Republic salvaged a 2-2 draw with Croatia at the European Championship on Friday in a game temporarily suspended when flares were thrown onto the pitch and Croatia fans fought among themselves.

Against the run of play, the Czechs earned their first point of the competition with two late strikes from substitutes — the first time at Euro 2016 that a team has come back from two goals down.

Tomas Necid scored the equalizer from the penalty spot deep into stoppage time after Domagoj Vida was penalized for a handball.

Goals from Ivan Perisic and Ivan Rakitic had given Croatia a well-deserved 2-0 lead before Milan Skoda ensured a nervy finish when he pulled one back in the 76th minute with a powerful header from captain Tomas Rosicky's perfectly judged cross.

"What helped most was that we didn't give up. We didn't give up on the point and I'm really proud of all the players," Czech Republic coach Pavel Vrba said. "And the fans were not only our 12th player, but also our 13th and 14th player today, they pushed us on."

The game at Geoffroy Guichard stadium in Saint Etienne was stopped for a while before the Czech equalizer by Mark Clattenburg when flares were thrown onto the pitch from the Croatian fans' end and fights broke out in their stand. Ivan Rakitic and Croatia captain Darijo Srna were among those signaling to the fans to calm down.

Croatia is potentially facing a big fine from UEFA over the incidents. The governing body said after the match that it will open disciplinary procedures against Croatia.

Croatia coach Ante Cacic was furious at the behavior of the team's fans.

Speaking through a translator, Cacic described those responsible for the incidents as "sports terrorists" and said the Croatian football authorities can't fight against these "hooligans" on its own.

"They don't deserve to sit in stands," he said. "They ruin everything we are doing. It's a group of maybe six, seven or 10 individuals. I hope we can identify them and that they will be punished."

Croatia's fans have one of the worst records in Europe for misbehavior in stadiums. Four years ago, then UEFA President Michel Platini singled out Croatia fans for criticism. Croatia was later deducted one point in its Euro 2016 qualifying group after fans painted a swastika symbol on the field before a match against Italy in Split.

Cacic said the incidents off the field could have adversely affected his team.

"My players lost their strengths, they might have been worried to see their relatives in the stands," Cacic said.

The late reverse undid all Croatia's good work during a match it dominated with midfielders Luka Modric and Ivan Rakitic dictating the tempo with their quick passes and pinpoint crosses.

Czech goalkeeper Petr Cech was under pressure almost from the kickoff after failing to clear a back pass properly. Croatia forward Mario Mandzukic then went close with a header that Cech tipped over the bar.

But it wasn't until the 37th minute that Croatia took the lead when Perisic picked up the ball, produced a fine step-over before firing a low angled shot into the corner of the Czech net.

Rakitic made it 2-0 after beating the offside trap. After his chipped goal, Rakitic celebrated by embracing captain Darijo Srna, who returned to France this week after attending his father's funeral.

Croatia's dominance started to wane around the time that midfielder Luka Modric was substituted around the hour mark for a thigh injury, which could sideline him for the team's final group against Spain.

"I'm not sure if it was a cramp or a more serious problem," Cacic said. "Our biggest problem today was with Luka Modric. We were not concentrated that much when he left the pitch."

Croatia is second behind Spain in Group D with four points, three more than the Czech Republic. Spain won its second straight game when it beat Turkey 3-0 in the group's other match. The result means Spain has qualified for the knockout stages of the competition.

"It's a strange situation, we were a much better team and should have scored two, or three more goals to take the three points," Rakitic said, before condemning the violent Croatian fans.

"I think most of our supporters are true supporters. But just ten individuals can make problems," he said. "The Croatian FA is fighting against this. We just have to say sorry. Hopefully UEFA can understand this. In our next qualifiers we'll have to play in empty stadiums because of stupid supporters."

AUSTRIA, June 7: Nigeria will go into the World Cup on a five-match winless streak after losing its final warmup game... Read More...

A Czech-Polish team said Friday it had discovered the world’s deepest underwater cave in the eastern Czech Republic. ... Read More...

Madrasa education to be included in government curriculum
19 hours ago