Crossing the border a hassle for Nepalis every Dashain 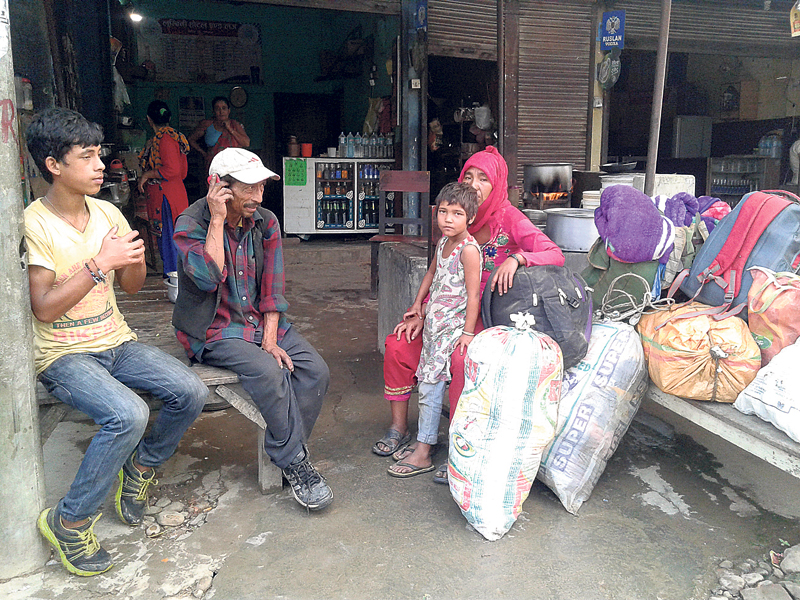 Family of Karna Bahadur Basnet, a local of Rukum, at Nepalgunj in this recent photograph. He is a laborer in Mumbai.(Krishna Oli/Republica)

NEPALGUNJ, Oct 7: Karna Bahadur Basnet, a local of Rukum district, had left for India along with his family a few months ago. He was there in search of work and for treatment of his sick wife. Neither did he get a good job nor is his wife recovering as expected.

However, he could not stop coming home for Dashain. After all, that was the demand of his family. On Thursday, Basnet was struggling to smile when stopped at Nepalgunj border.

“I had to pay much more than the usual rate for rickshaw. In the border, they give us much hassles. Police torture us a lot. It is not easy to travel during festivals,” he said in a faint voice. “There we didn’t get any well-paid job. We used to cut grass for private houses for meager salary,” he added.

Banset didn’t shop a lot for Dashain. Except for a few things, everything he was carrying, including old clothes and utensils, were wrapped in bundles. However, in the border, a dozen of Indian police interrogated him, he reported. “They checked our bundles though there was nothing in them. They also asked for money with poor people like us,” he lamented.

This is a usual story of Nepali migrant workers returning home from India. Every Dashain they are harassed by SSB, they complain. “They stop our bus just to give unnecessary hassles to Nepalis. It is not a new thing. They openly bargain for money,” said Rajendra KC, a local of Tulsipur. “From Lucknow to Rupedia, you have to give them Rs 100 to Rs 200 at every check point,” KC said.

According to KC, Nepalis cannot retaliate in ‘other’s land’. Indian police obviously behave highhandedly. “They misbehave. They literally ask for Rs 100 or 200. If you resist, you’re in problem,” he narrated. Authorities of Nepal and India had held meeting last week to discuss about the issue. They had agreed to make arrangements for safe and hassle-free journey for Nepalis coming home in the festival. However, as things did not change at all, Nepali authorities are tensed now.

“There was a meeting held and agreement made. But we have heard that Nepali labors are being troubled,” said Banke police chief, DSP Tek Bahadur Bhattarai. “But, victims have not given written complaints,” he added.

Five thousand to six thousand Nepali labors enter Nepal on a daily basis from Nepalgunj border, informed Area Police Station, Jamunaha. Chief of the office Pramod Chhetri stated that the number is increasing everyday. “Now it’s 5000 to 6000. But the number is on the rise,” he said. “We have deployed police at the border in plain clothes for their security,” he added.

Chhetri told that Nepali labors are being looted in the Indian side where Nepali police cannot do anything. It is only the Indian authority which can ensure safety and security of the people there. “Our police reach Rupedia bus park to help out the Nepalis. They do their best to help the Nepalis return home safely,” he said. “We cannot reach Babagunj or any further and we cannot do anything if our people are harassed there,” he added.

Happy to get home

Though they look tired and have enough stories of struggles to share, the excitement of Dashain could be seen in their eyes. Lots of Nepalis spotted at bus park and border areas stated that they are feeling quite good as this is Dashain time and they could come home. “I was in Banglore. I am very happy to come home in Dashain,” said Ashok Dhami of Parshuram municipality of Dadeldhura. “I will go back only after Tihar. The whole one month would be fully a relaxing period,” he added.

For Harka Bahadur Dhami of Dadeldhura, Dashain is the time for get-together with family members who are never in touch otherwise. The laborer in Mumbai stated that such days would hardly come without festivals like Dashain. “Our boss lets us go home during Dashain. Or else, how would we ever be able to come home. They never allow leave at any other time,” he said.

As soon as they reach adolescence age, boys of the far west generally hunt for jobs in India. Due to poverty and lack of opportunities, many land in Mumbai, Delhi, Pune and other parts of India for better future prospects.

According to Dhami, few can progress as expected while others always remain with merger income. And Dashain is not just a festival for those people, but the only time to get home and have little time for self and family. Whatever little savings they make the whole year are spent in Dashain without any hesitation.