Every day, more than 1,000 Nepalis go for foreign employment 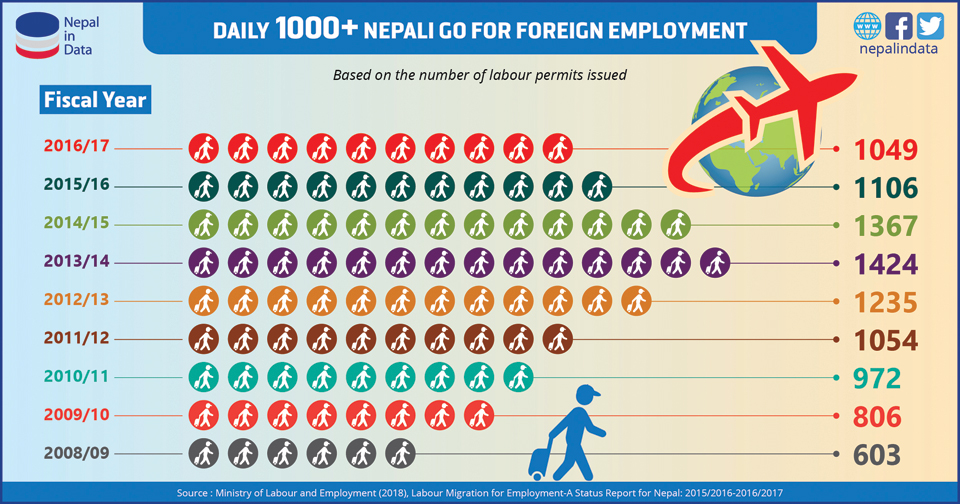 KATHMANDU, May 8:  More than 1000 Nepali workers opt for foreign employment, according to a new report released by the Ministry of Labor and Employment-2018.

The Council of Ministers today approved the 'inquisition guidelines' to minimize problems related to foreign employment presented by the Ministry of Labor and Employment.

On Monday, the meeting of Council of Ministers had decided that workers would be sent only as per the demands for labor certified by Nepal's missions. Joint Secretary at the Ministry, Dr Ram Prasad Ghimire, said that the guidelines would help reduce problems of cheating a trend common in foreign employment.

"The Ministry works in a coordinated manner with the embassies of the related countries and governments for the foreign employment," he said. “However, the government doesn’t restrict Nepali youths opting for foreign employment as it was a compulsion to many Nepali people.”

Ghimire added that the government came up with the guideline following consultations with former ambassadors.

HAVANA, May 19: More than 100 people were killed when a Boeing 737 crashed soon after taking off from Havana... Read More...