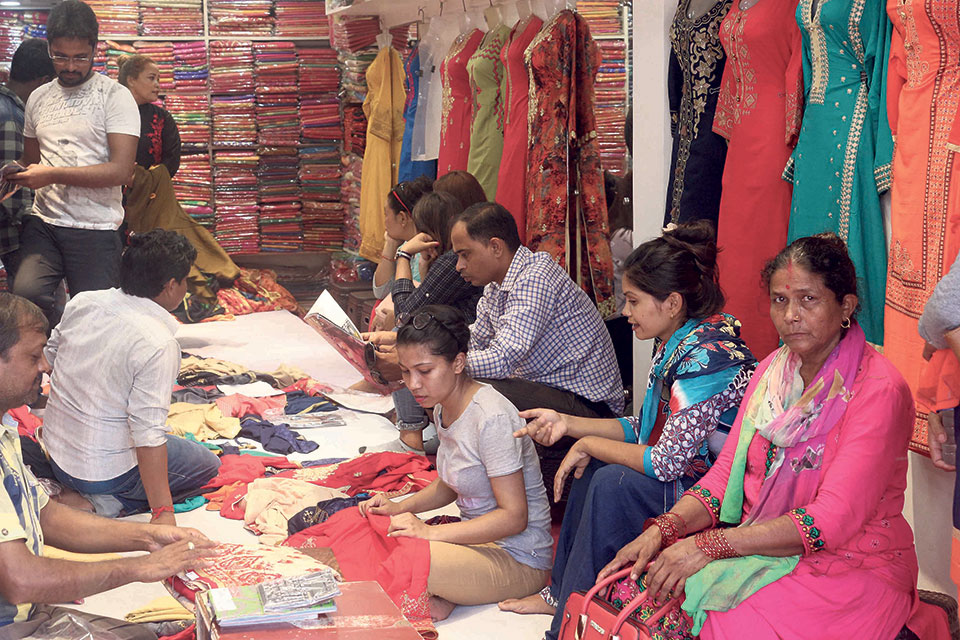 BHAIRAHAWA, Sept 26: As the main day of Dashain festival ‘Biyadashami’ nears, festive atmosphere has gripped the country, mainly in settlements occupied by Hindus, who form the majority in the now secular state.

Ever since the first day of Dashain, also known as Gathasthapana, locals in Rupendehi district have geared up in making preparations for the festival. Due to the open border with the southern neighbor India, locals of the district are thronging across the border to purchase their Dashain necessities at better prices.

The shopping spree in neighboring towns across the border had started even before the Dashain, and is increasing ever since Gathasthapana. The country is heavily dependent on imports from India to meet many of its economy needs. Such activities have drastically increased of late due to the festival.

In a bid to supply necessary goods for Dashain shoppers, cheap market, also known as ‘Sasto Bazaar’ locally, are operating in Butwal and Bhairahawa districts for a week. Those markets too are flooded with goods from India.

Despite the attempts to supply imported goods in the local markets, the numbers of people crossing the border to have better options and price have not declined. Neighboring town of Sunauli in India remains the most popular destination for Dashain shopping among majority of the locals.

Indian traders have taken advantage of the situation by supplying more goods in Sunauli so that the demands from Nepali shoppers from the border are met. The marketplace is full of clothes, cosmetic and food items among other products that are popular among Dashain shoppers.

“On an average, over 500 Nepali brothers and sisters visit our store alone,” said Tony Jaiswal, a storekeeper at the Sunauli-based Suresh General Stores. He said Nepali shoppers throng the marketplace the moment it opens in the morning and shop till very late into the evening during Dashain festival.

On Monday, Bhumi Gurung of Nepal was one among the hundreds Nepalis shopping in Sunauli. Like many others, he also cited the price factor as the reason for shopping in Indian town.
“At a time when price of every product has skyrocketed, being able to save some money in shopping can mean a great deal. It can make a huge difference especially when we have to buy many products during festivals like Dashain. This is why we travel to the bordering Indian town during festivals,” he said.

Gurung said local traders and businessmen back in Nepal charge exorbitant prices for everything during the festive seasons. “They want to take advantage of the market demand and are mostly driven by to maximize revenues. They mostly do not care about the quality of the products they sell during the festivals. These factors greatly discourage us to purchase goods from them,” he added.

Nepalis shop across the border in hope of purchasing quality products at better rates than in their home towns. Thousands of Nepalis shopping in hundreds of stores of Sunauli contribute in boosting the economy of the Indian town. The same situation is true in various other Nepal-India border towns.

According to Sunali Traders, one customer purchase goods worth Rs 5,000 to Rs 20,000 in one purchase. They claim modest price and quality of their products attract Nepali buyers to their shop.
During other parts of the year, financial transactions of stores in Sunali stand at around Rs 10 million to Rs 20 million per day. Their transaction triple during festivals like Dashain, Tihar and Teej, they informed. Apart from Rupandehi, locals from Palpa, Gulmi and Arghakhanchi among other districts also visit Sunauli town for Dashain shopping. Not only the locals; traders and businessmen also import goods from those stores and sell it in other parts of the country, including in the capital Kathmandu.

Although locals can rely on markets of Butwal and Bhairahawa to purchase fancy clothes, shoes and slippers; they turn to Indian towns for cosmetic, grocery, and clothes like kurta salwar and Indian sari.

“I came here to purchase sugar, cosmetic and clothes. Although there are good array of quality clothes in Butwal market, I came here because traders in Butwal charge exorbitant price,” said Januka Bhusal of Kotihawa, who was seen in Sunauli on Monday.

Local markets in Bhairahawa and Butawal among others increase their price during festivals, found a monitoring done by the district’s Market Monitoring Committee. The committee also found some traders indulging in selling outdated products or products which did not have expiry date mentioned on them.

If local authorities monitor the markets effectively for quality and prevent traders from indulging in exorbitant charging, locals can be convinced to purchase local products, preventing millions of rupees of outflow of Nepalese currency. Otherwise, Nepalis would continue flocking to Indian towns to make minor and major purchases, which can directly affect local markets, say stakeholders.

Crossing the border a hassle for Nepalis every Dashain

NEPALGUNJ, Oct 7: Karna Bahadur Basnet, a local of Rukum district, had left for India along with his family a few... Read More...