Cricket Players’ Association to expand its role if CAN crisis continues 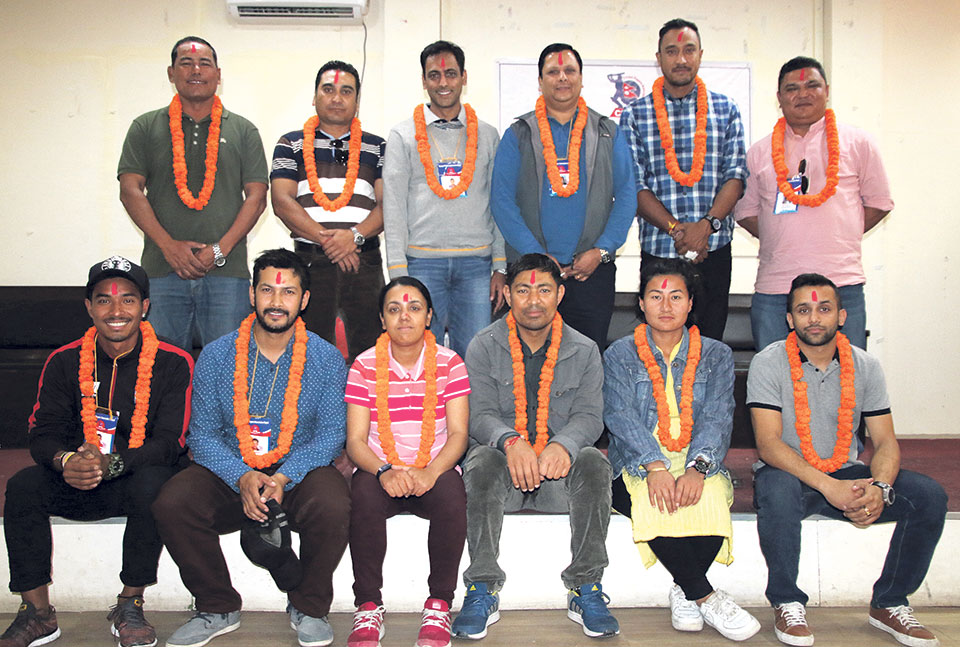 Current and former cricketers pose after being elected in the new executive body of the Cricket Players Assocation Nepal (CPAN) during the third annual general meeting in Kathmandu on Sunday. Photo: Raman Shiwakoti

KATHMANDU, March 26: Former and current cricket players have strongly urged the suspended cricket governing body Cricket Association of Nepal (CAN) to resolve the current crisis in cricket administration as soon as possible to take full advantage of the One-Day International status.

The players made such demand at the Annual General Meeting of Cricket Players’ Association Nepal (CPAN) held in Kathmandu on Sunday. Former captains Pawan Agrawal, Lekh Bahadur Chhetri, Raju Khadka, and Binod Das as well as the current captain Paras Khadka and several members of national cricket team were present on the occasion.

“We feel that we cannot afford to lose this opportunity. We strongly urge all concerned to feel the urgency of the situation and sort out the current crisis,” said Dr Manish Raj Pandey, the newly elected president of Cricket Players Association Nepal (CPAN). Pandey succeeded founding president and former national cricket team captain Pawan Agrawal.

CPAN stated that it was aware of the ongoing efforts of International Cricket Council (ICC) and CAN’s stakeholders to search a common ground for the establishment of a governing body of CAN, adding that it was worried with the regular delays.

“It is very unfortunate that to give this achievement an impetus and reap the benefit of ODI status, we do not have a functioning governing body. We are depressed to see that no substantial progress has been made so far in this regard,” added Pandey.

The CPAN stated that it would expand its role in national cricket if the current crisis of the governing body was not solved immediately.

WHO SAID WHAT
Pawan Agrawal
“The ODI status should not be wasted like the T20I status. As a cricketer and former captain of the nation, we want a governing body that can make urgent plans to utilize our current status in world cricket. We are even ready with detailed plans and presentation if the government needs us to help on solving the current crisis in cricket. Our next target should be Test status, which is not possible sitting idle with a suspended board.

We do not want to takeover or intrude into the administration of cricket. But if nothing keeps happening someone has come forward. Our role is not to govern but our concern is the welfare of players. Players are affected and only we can understand it. We could have taken over the CAN two years ago but we want the concerned people to do it. We have discussed about taking over if nothing happens.

Advisory committee’s role was to work on the constitution, which we did. Regarding our cricket team, maybe we don’t know what our best team is. We need a system to find that. We can achieve much more.”

Lekh Bahadur Chhetri
Players’ hard-work should not be wasted. We want the respective provincial government to help in each province to uplift the status of cricket. Four years passes in an instant. We want to draw the attention of government and related administrators towards the current mess. This is a great opportunity to make aspiring cricketers, parents and corporate bodies believe in cricket as an industry.”

Raju Khadka
“Normally a guardian is there to guide you through your success but unfortunately the Nepali cricket do not have one. This is a time to prove that cricket can be Nepal’s identity besides Mount Everest and Gautam Buddha. Instead of sporadic rounds of success and failures, Nepali cricket needs to gradually progress under a governing cricket body.”

Binod Das
“Right now, Nepali cricket is worried about its future. We have lost more than we have gained. Cricketers devote their fruitful years in cricket but when it is all over, they don’t have careers to go back to. It is not the case of not having a leader. That is a false statement. If one can take care of their own business or jobs side by side, it is no brainer that one can lead the cricket body effectively. We are sitting here in front of you all. Today, for the first time we have all the Nepali team captains from past and present sitting under the same roof due to CPAN. I am thankful for that. I want to request all the stakeholders not to misuse this opportunity and let cricket flourish.

Neither I have any authority on administrative part nor have I been contacted by anyone seeking any kind of expert help on solving the current mess in cricket. Nevertheless, we need to solve it as soon as possible. We need a system in place more than people with positive attitude.”

Paras Khadka
“I want to dedicate this trophy to all the captains who has worked hard in yesteryears  for their hard-work, and want to congratulate them including Paresh Lohani and Uttam Karmacharya who are not here today. It is high time all the involved stakeholders take the responsibility. We should not sit down and be apt with ODI status; we need to target the Test status next. It will take time, maybe 8 or 10 years but it can be done. From Mechi to Mahakali, everyone is excited about cricket and wants to build cricket grounds, etc. But we need collective effort from players to administration to take our cricket to next level. We definitely can achieve our dreams.

I can’t say who is right or who is wrong. Neither can I say that we should sit idle until ICC bans us. We get a feel that the delay in solving CAN crisis is because they don’t want to lose seats on board. The new constitution will only allow fitting candidates to run cricket.”