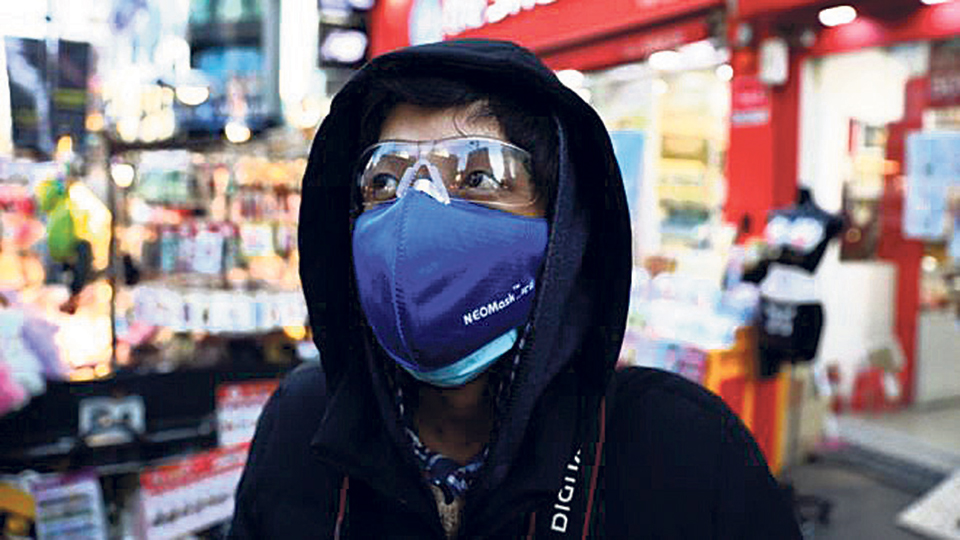 Some most horrifying reports said people are dying on the streets. It gave a sense of fear. I was observing something so ghastly for the first time

When the novel coronavirus (COVID-19) appeared in Wuhan city of China in December last year, the rest of the world saw it as something terrible and prayed for the early recovery of the patients and control of the disease. We in South Korea did the same. The situation took unanticipated turn later on. The COVID-19 went on expanding its scope, infecting hundreds of thousands. People began to die.

Some most horrifying reports said people have started dying on the streets. It gave a sense of fear, particularly to me, in that I was observing something so ghastly for the first time. It was like something I read in textbook years before: In a country, green pastures were turning yellow, cattle were dying all around and people were also dying for the no fault of their own. Something sinister had happened in the state which nobody could decipher easily.

Overtime, China showed prowess by building large, new hospital facilities overnight to quarantine and treat the patients. It consoled the world community that China may contain the spread of it. Reports also said that people have been locked down in residences, limiting their movement except for urgencies. However, the number of infected people soared and so did the number of deaths. Moreover, the virus did not limit to Hubei Province and China. It entered South Korea too and the first case was reported on January 20.

Rising infections
Gradually, the number of corona-infected people went up in Korea. Now it has above 7000 confirmed cases, with 166 recovery and 51 deaths. Korea is a country close to China. The COVID-19 did not spare it. What is surprising is a vast number of countries across the globe are already experiencing its invasion. Above 100 nations have corona patients now, and some of them are confronting rapid rise in fatality. It shows that the world today is truly a global village. None of its corner remains aloof and untouched when some other parts are affected by something. The studies show that the spread of the virus in Korea has its connection to a Christian sect called Shincheonji that has a branch in Wuhan, China.

The visits exchanged by its followers, especially from Korea’s Daegu city based Shincheonji Church of Jesus are said to have significant contribution in it. The 31st confirmed patient who was said to be a “superspreader” of the virus in Korea also belonged to the Daegu Shincheonji. Moreover, Daegu alone has 75 percent and the North Gyeongsang Province in its vicinity has 10 percent of the total confirmed cases in Korea. The remaining 15 percent stands above 1000 and it is distributed across the country, the capital Seoul being no exception. By now, Seoul records 100 plus cases. Amid this, the Korea government has raised the virulent COVID-19 alert level to ‘red’, which is the most serious level in the grading scheme. The affected areas of Daegu are literally in lockdown. Academic institutions are shut down. People have been told to minimize their public movements except exigencies. Consequently, for fear of virus contact, the busy streets in the city centers, shopping malls, public transports including trains are largely empty. Even companies are closing when a case or two are discovered. Economy is suffering. In this context, Korea government has allocated 13.7 billion dollars for coping with the crisis. The government seems to have devised plans to control the virus, sanctify the community from infection as well as recover the slowing economy, with the massive package. During these one and a half months after the first case, Korea has recorded the largest infection outside China. The fatality rate is below 0.7, which is said to be the lowest after Singapore. Yet, fearing transmission of the virus, more than 100 countries have either banned or tightened their policy, restricting Korean flights, passengers and even other travelers from or via Korea.

Taking it quite seriously, the Korea government has reiterated its position to the friendly countries via high level brief to the Seoul based diplomatic community. On March 6, Foreign Minister Kang Kyung-wha herself elaborated at length the COVID -19 situation. Her point was that Korea has quality health service with massive medical infrastructure and advanced medical management, along with ample resources and commitment. Even the World Health Organization, which has declared the COVID-19 a global health emergency, has shown a conviction that Korea can stem this virus all by itself. Therefore, there is nothing to restrict Korea unilaterally. Should there be any concern owing to respective country’s relative capability to fight back potential transmission and damage, bilateral consultation is always there to resort to and reach the most welcoming solution.

Rays of hope
Meanwhile, there are hopes that the virus will be brought under control soon. The globally growing efforts are prominent in this regard. The rising temperatures along the concluding winter are also pronounced. Korea has adopted test-through-drive technology, isolation, home quarantine, limited public movement via shutdown of schools, online package of universities, online immigration and other public and private services. Other measures include target group priority testing (of Shincheonji followers), thorough diagnosis of infection source and related testing, massive awareness schemes, scheduled distribution of inevitable safety masks and hotline facilities for guidance and service. Similarly, the voluntary cooperation by medical persons from across the country to serve in the affected areas has boosted morale of everyone involved.

There is provision of corona testing of all incoming and outgoing passengers at international airports, and preventing the infected patients from visiting overseas. The provision of non-discriminatory treatment of foreign nationals, no matter even if staying in Korea on illegal status, at the cost of Korean government until full recovery is commendable.

There is a system of regular, transparent dissemination of data on COVID -19 officially. It has given a confidence to the foreign as well as domestic stakeholders in and outside Korea. Reportedly, the number of new corona patients has begun to decline from March 8. Let us be hopeful that the situation will come under perfect control very soon.

The author is first secretary at Embassy of Nepal in Seoul
uddaveco@gmail.com

LONDON, May 9: Britain is to introduce a 14-day quarantine period for almost everyone arriving into the country to avoid a... Read More...

Awareness on coronavirus in Chepang community

CHITWAN, April 4: A public awareness programme has been launched at Chepang community of ward no 1 in Ichchhamanakamana rural... Read More...