Couple gives birth to seven sons in hope of a daughter 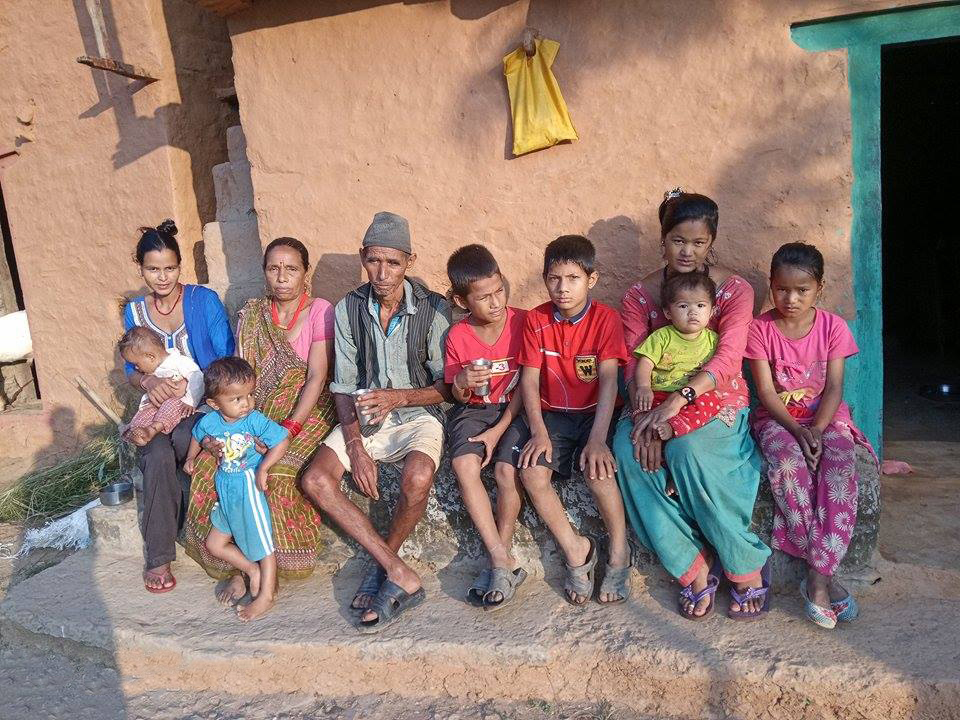 Bir Bahadur and Mayadevi with their grandchildren and daughter-in-law at their home in Jajarkot in this recent picture. Janak KC/Republica

JAJARKOT, Oct 8: Preference for son over daughter is not a new story for Nepali society. From female feticide to giving birth to a number of girls in hope of a son is still a widespread practice. However, a couple in Jajarkot has set a different example.

In a hope to have a daughter, Bir Bahadur Oli and Mayadevi Oli gave birth to seven sons. Every time Mayadevi got pregnant, they prayed for a daughter. “God gave us seven kids, but we were not blessed with a daughter,” Mayadevi laments. Bir Bahadur is 65 and Mayadevi is 57. They now have no more hope of things changing for them.

“We have also seen many couples who want son and keep trying until they have a son. But we wanted a daughter since the beginning. But we have seven sons, no daughter,” laments the old man. “Daughter is a different thing. Son cannot fulfill the space of a daughter,” he added.

His wife Mayadevi agrees. Going back to the memory lane she started talking about the time when she had entered Bir Bahadur’s house as a bride. “We tied nuptial knot 35 years ago. Two years later, I gave birth to son. That was fine. Then we started dreaming to have a daughter,” she narrated.

Second time, she gave birth to a daughter, as she wanted. But the child did not survive. This thing, she did not want to reveal, she said. “That is equal to not giving birth, as she did not survive,” Mayadevi said. “After that I got pregnant several times. I only had son,” she added.

There is three years of difference between the boys in average. After having so many sons, the couple felt tired and decided not to go for another baby. “We lost hope. So, we gave up,” said Mayadevi.

According to Bir Bahadur, he wanted a small, happy family. After the birth of the first child, he had thought of only one more. But the dream was to have a daughter.

“We were never in favor of having so many children. But somehow it happened. In hope of getting a daughter, we just tried again and again. Such a huge family was not my plan,” he said.

Bir Bahadur calls a daughter an avatar of the goddess Laxmi. He considers the couples who have a daughter very lucky. Both the husband and wife feel that a family is incomplete unless it has a daughter.

“Where there is a daughter, the house is full of life and warmth. Or else, it feels just so empty,” Mayadevi said. “We have no more hope. Yet, we feel the emptiness,” she added.
The festival of Dashain has just been over. The couple badly missed daughter they never had. Now, Tihar is around the corner and they say that the festival is also going to be less cheerful than it is supposed to be due to the lack of a daughter.

“If we had one daughter, all our sons would receive colorful tika on their forehead on the day,” said Bir Bahadur. The couple now has grandchildren. They have added life to the family. Yet, they can’t help missing daughter.

“We are a family of 25 members now - my sons, daughter in laws and their kids. It’s a huge family,” Bir Bahadur said. “We do have grand-daughter. But it’s not like having a daughter,” he added.

The old couple is still very active. While Bir Bahadur works in the field, Mayadevi keeps herself busy in household chores. “Our sons and daughters in law work and earn for the family. We also work,” Mayadevi said. “Some of our boys work abroad,” she added.
Their sons Deepak, Lalit and Hemant are in Gulf countries. Second daughter in law Manisha works in Qatar while others do farming at home. “My youngest son Janak is studying in grade 11. Besides him all have settled down,” said Bir Bahadur.

Having son is still taken as a matter of pride in their society. When they had one after the other son, the couple received congratulations from everyone. “People hardly understood that we actually wanted daughter. But, you do not get everything you want in your life,” Bir Bahadur says while trying to console himself.