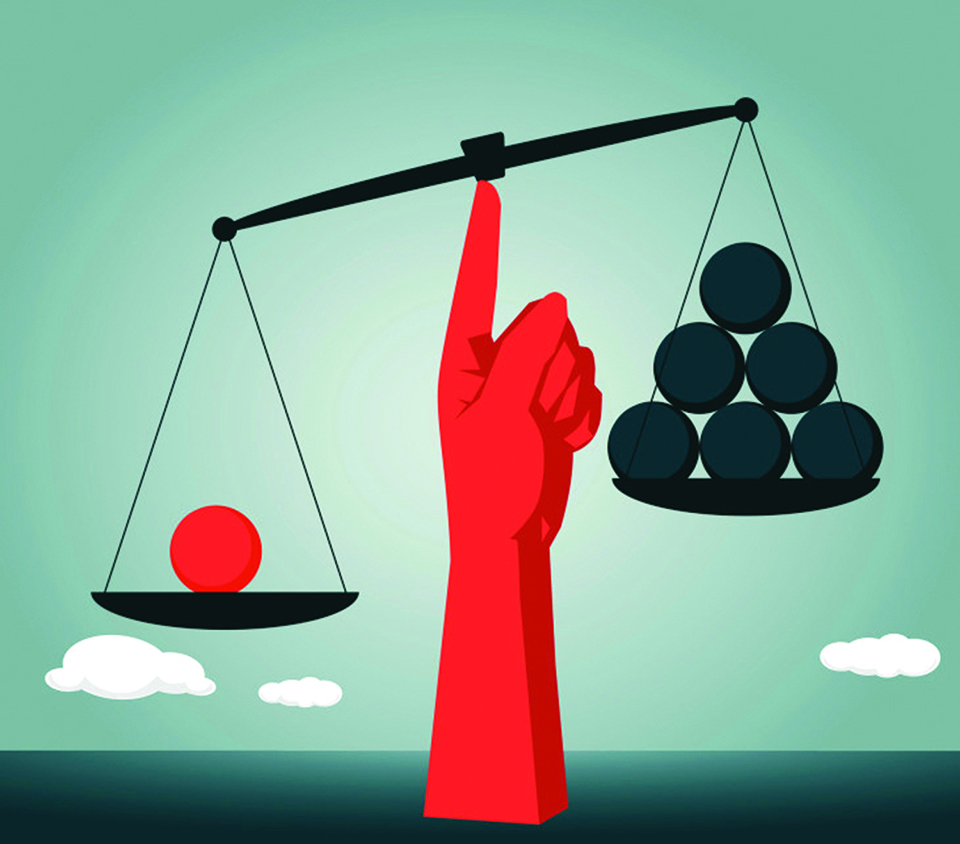 The author is a Country Director of OXFAM, Nepal
news@myrepublica.com

The resilience of Nepali people and its democracy is evident in the nation’s swift return to normalcy following a decade of armed struggle. The country’s social and economic well-being had been shattered not only by the struggle, but also natural disaster. In 2015, following a lot of debate, progressive national constitution was adopted. While there is reason for optimism, it’s still a long road to equality and justice for all citizens of Nepal.

Key among the development challenges facing Nepal is the ever-widening income and wealth gap between the haves and have-nots. Women and girls are worse off.  Multiple inequalities like caste, class, gender, and geography have been around seemingly forever, but they are now worsened by economic structures biased in favor of the wealthy pursued under neo-liberal economic ideology.

Oxfam together with Humanitarian Accountability Monitoring Initiatives (HAMI) and South Asia Alliance for Poverty Eradication (SAAPE) researched the trends, drivers, and implications of inequality affecting Nepal. All available indicators reveal that the gap between the rich and the poor is rising. The richest 10 percent Nepalis earn three times more than the poorest 40 percent. In other words, three million people enjoy an income three times that of 12 million people combined. This gap will continue to worsen further unless it is reversed. Wealth inequality is significantly higher than the income inequality. The richest 10 percent of Nepal’s population has more than 26 times as much wealth as the poorest 40 percent.

The richest Nepali man owns a total of US$ 1.5billlion. It would take a poor Nepali worker over a thousand lifetimes (100,000 years) to earn the same. Here’s a corporate example: a top bank executive earns a salary at least 100 times that of an average worker.

One of the key drivers of this staggering inequality is highly unequal land distribution. In Nepal, more than two-thirds of the population depends on land for making a living, yet land ownership is concentrated in the hands of a rich minority. Seven percent of the wealthiest households own around one-third of the country’s agricultural land. In contrast, more than half of Nepali farmers own less than half a hectare of land, and 29 percent of population has no land at all to call their own.

Women and girls are worse off. While they work long hours in farmlands, the value of their work is not recognized, and 81 percent have no land ownership. Minorities are also less likely to own land, with landlessness as high as 44 percent among Dalits in the Tarai region.

The country’s drive for privatization has been another cause for this gross inequality. The privatization of state-owned enterprises (SEOs) which started in 1992 has cost the government 4.93 billion rupees over recent years. It has also aggravated unemployment in Nepal as thousands of people have lost their jobs as a result.

However, the most unacceptable cost of privatization is that essential public services like health and education are no longer accessible to the poor. Now run by profit-focused private model, many services are unaffordable for poor people, especially women and other disadvantaged groups. In other words, privatization has created a two-tier system: The rich pay for and obtain higher quality services, the poor are left behind having to rely on grossly inadequate and poor-quality services offered by public institutions.

The government relies on a regressive tax structure for revenue which puts an unaffordable burden on the poor through consumption taxes.  A more equitable solution would be the mobilization of revenue through direct taxes on income and wealth where rich pay more.  Indirect taxes account for more than two-thirds (68.4 percent) of Nepal’s total tax revenue. Value-added Tax (VAT) has increased as a share of commodities and services from 30.4 percent in 1989/90 to 47 percent in 2014/15. By its very nature VAT is regressive.

Lower tax revenue means there is less money to spend on providing social services.  Between 20011/12 and 2016/17, spending on health fell from 7.8 percent to just 4.7 percent and education from 18.3 percent to 11.4 percent. These two public services are known for creating equality and improving the prospects of poor and the marginalized people.

The cutbacks hit them the hardest adversely affecting their chance of a brighter future—inequality of opportunities, fewer and limited options for the poor, and restricted social mobility, room to improve quality of life, wellbeing and prosperity.

More than one-third of the population suffers from inadequate healthcare. Many hospitals and clinics lack medical supplies, and there is a substantial shortage of trained staff. The country’s patient to doctor ratio is a woeful 1,734:1. A poor child in Nepal is nearly three times more likely to die before the age of five than a rich child.

Like everywhere in the world, the share of labor in national income is constantly declining while the share of capital is growing. The stipulated minimum wage is woefully inadequate for a decent living or worse still, in many cases is not implemented. Ninety six percent of workers have informal jobs, where minimum wages and other legal provisions like the Social Security Fund are often not provided. Bonded and forced labor is still highly prevalent in Nepal, with more than 100,000 households making a living in bonded farming.

The rising rich-poor divide in Nepal is likely to result in severe political, social and economic turmoil in the future. If not checked immediately, it is unlikely to lead to a healthy economy and a fair society.

Nepal can still achieve equitable prosperity for all its citizens. To tackle inequality and put Nepal on the right track, the government must act immediately. The government is advised to carry out the following tasks. First, it should collect data and publicly report on economic, social and gender inequalities so that well-informed decisions can be made. Second, it should prioritize and implement progressive land reform to achieve a more equitable distribution of land. Those who have no land, poor farmers, and women must be able to gain land ownership. Third, it should reform the tax system by implementing more progressive taxation, reducing unproductive tax exemptions and incentives, and ensuring transparency. It should close any loopholes that allow tax avoidance, evasion, and illicit financial flows. Fourth, the government should prioritize investment in essential public services like education, health, and social protection which promote equitable prosperity. Fifth, it should ensure free universal health and education systems and a basic social protection for everyone. Finally, the government should gradually increase the minimum wage to a livable wage, and protect workers right to collective bargaining.

The author is a Country Director of OXFAM, Nepal

Income inequality is near historic highs, wealth inequality is even higher, and economic insecurity is widespread ... Read More...

We have no dearth of tragic events, but they have not yet formed the basis for famous works of art Read More...

We should critique the constitution on legitimate grounds. But disseminating false information about it is unprofessional and unscholarly ... Read More...