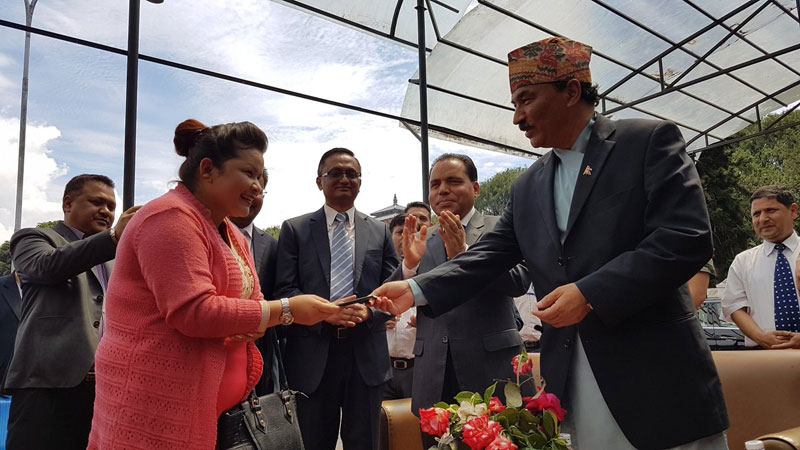 The Department of Passport claims to have come up with a new system that is capable of delivering passports within 24 hours of application. One can understand that the department wants to be able to issue passports fast, particularly to those who urgently need them.

But the news that one can get a passport within a day by paying triple the normal charge of Rs 5,000 is hardly something to celebrate. For those living and working abroad, particularly those employed in Gulf countries, they still have great difficulty obtaining passports.

Their painful story seldom comes to the notice of policymakers like Foreign Minister or Labor Minister despite their several visits of labor destinations at state expense. When the government decided to hasten the issuance of Machine Readable Passports (MRP), Nepali laborers in Gulf nations like Qatar Saudi Arabia, Oman, Bahrain, the UAE and Kuwait had to rely on agents and their employers recruited for the purpose. The agents submitted documents to concerned embassies on laborers’ behalf.

A large majority of the laborers in the Gulf could not afford to visit consular offices, even though there is a provision requiring applicants to be physically present and give their thumb prints before the consuls. So this provision has been implemented rather flexibly.

When old passports are collected and applications for new ones submitted to concerned embassies by company agents, Nepali laborers have to wait for six to eight months. After that they approach the local Nepali missions, only to be told that their passports had not been received from Nepal.

Having been repeatedly rebuffed, the laborers, desperate to obtain MRPs, come to Nepal. Even embassy officials would advise them to do so and easily provide them travel documents facilitating their one-way travel to Kathmandu.

In Kathmandu, the frustrated workers, on short leaves, visit the Department of Passport and reapply for MRP, paying double the normal charge of Rs 5,000. The poor and dejected workers, having spent Rs 10,000 in fees and several thousand more in food and accommodation, would then be told that their applications had been rejected.

The department officials would then counsel them to go to their native districts and try their luck there, although government people know new applications would be futile. But the ignorant workers still visit district administration offices and pay another Rs 5,000. But after a week of their application they come to know that their application was again rejected by the computer system.

Computer records would show that the applicants had already obtained the MRPs: the passports that have been dispatched to Gulf countries but were somehow misplaced on the way.

Finally, they realize that they can’t have their passports and blame their wretched fate. They don’t have anyone to speak on their behalf. They lose everything including money, their job and they face humiliation both at home and abroad. The above description fits almost all laborers in the Gulf, but those in Qatar and Saudi Arabia are the biggest victims.

The question is: who is responsible for this? Is there a government representative to take up their cases and provide them justice?

Also, the fees charged for passport is very high, taking into account the minimal government expenditure that goes into preparing new passports. In no other country would a government treat its citizens with such open bias. There is no justification to charge some Nepali citizens more just because they are in foreign countries.

Nepali citizens applying for MRP from Europe and America are charged as much as US $300, which, when converted into national currency, would be equal to almost Rs 18,000.

The government should not treat the work of providing passports to its citizens only as a revenue collection opportunity, although it can fix reasonable rates. Nepali people have recently been victims of devastating earthquakes and five-month-long economic embargo. So it would be wise for the government to be more service-oriented, which means it should serve the majority, not only a few handsomely rich. It cannot victimize laborers in the Gulf whose hard-won remittance provides a lifeline for our economy.

It must hold careless staff of concerned embassies responsible for their neglect of duty. How can such important documents be so easily misplaced?

Destruction of freshwater ecosystem has led to as much as 81 percent decline in population of some species ... Read More...

CANBERRA, Jan 22: Australia on Sunday announced an overhaul of security at all its international airports, with technology set to... Read More...