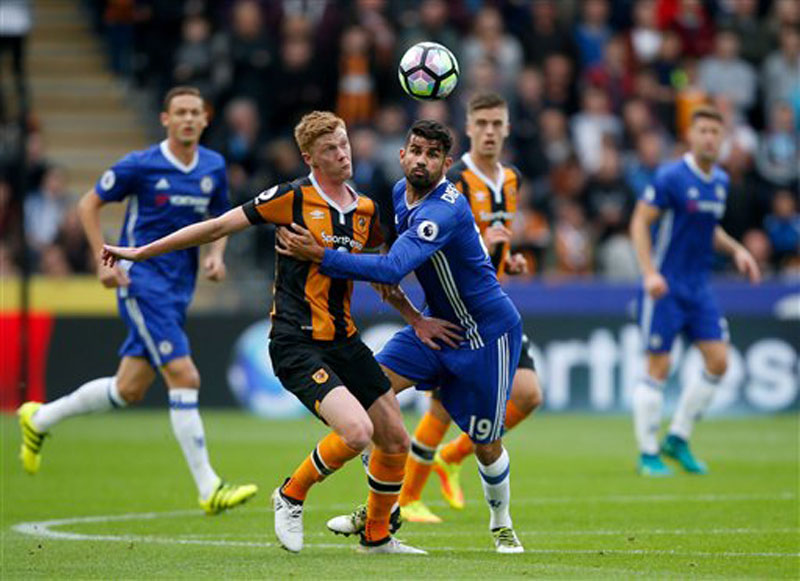 HULL, England, Oct 1: It wasn't magic but Diego Costa's skill helped Chelsea make its winless streak in the English Premier League vanish with a 2-0 victory at Hull on Saturday.

Chelsea's underwhelming start to the season had seen the pressure mount on manager Antonio Conte, who admitted on Friday there was "no magic wand."

Costa set up the opener for Willian in the 61st minute and curled home a similar effort six minutes later to end his side's demoralizing league run — a 2-2 draw with Swansea, followed by losing 2-1 to Liverpool, and a humiliating 3-0 defeat at Arsenal.

Conte must have feared the worst after watching his side struggle in a disappointing first half in which Chelsea did not have a single shot on target. Goalkeeper Thibaut Courtois kept the visitors in the game, saving against Robert Snodgrass and Ryan Mason.

After the interval Chelsea looked a different side, with Eden Hazard firing its first shot on target in the 48th with a stinging drive which Hull goalkeeper David Marshall did well to tip over the bar.

Chelsea should have grabbed the lead just before the hour mark when Costa rounded the advancing Marshall but saw his shot from a tight angle deflected onto the post by Jake Livermore.

Chelsea grabbed the lead three minutes later when Costa found Willian on the left. The Brazilian turned Markus Henriksen and David Meyler before curling a superb shot into the roof of the net.

Chelsea stretched its lead in the 67th when Costa blasted home after Nemanja Matic's blocked effort landed perfectly for Costa, who fired home from a similar position.

When Chelsea visited Selhurst Park to face Crystal Palace, everyone thought it would be an easy win for Chelsea. But,... Read More...