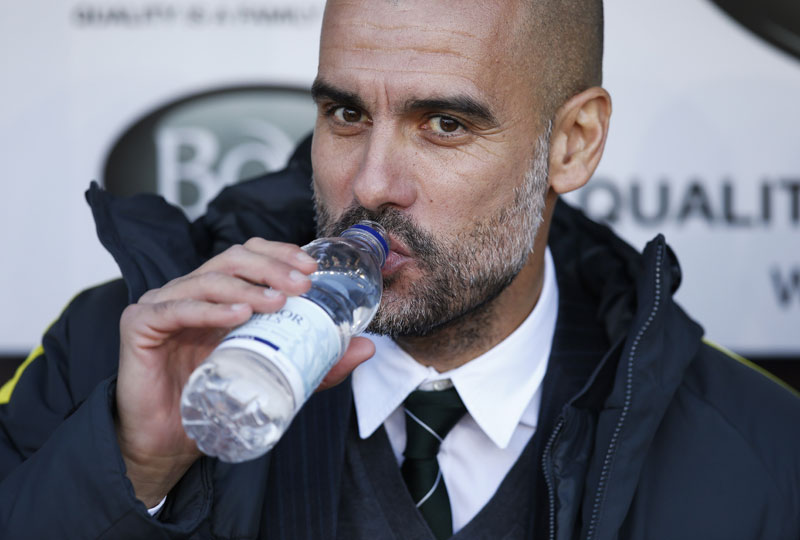 Having secured a gritty 2-1 win over Tottenham Hotspur at Stamford Bridge last weekend, Chelsea have won their last seven league games -- their best run since 2010.

But while City's early-season momentum has faded, they are unbeaten at home under Guardiola and will move two points above Chelsea if they prevail.

"It's a big test because Man City are a fantastic team," Conte said following the comeback victory over Spurs.

Two months ago, City were the pace-setters, having won their opening six fixtures, while Chelsea were reeling from successive losses to Liverpool and Arsenal that had left them in eighth place.

But City's 2-0 defeat at Spurs revealed Guardiola's side remained a work in progress and while they have won their three subsequent away games, they have drawn their last three home matches.

Chelsea, meanwhile, have been flying ever since Conte switched to a 3-4-3 formation during the second half of their 3-0 defeat at Arsenal on September 24.

Should they win again at the Etihad Stadium, it will be the first time they have won eight successive league matches within the same season since a sequence of nine between January and April 2007.

Saturday's lunchtime encounter has been billed as a shootout between City striker Sergio Aguero and Chelsea's snarling talisman Diego Costa, who top the Premier League scoring charts with 10 goals apiece.

But while both teams are dependent -- if not over-dependent -- on a single, prolific goal-getter and have coaches who prize high pressing and relentless industry, they are worlds apart in other aspects.

Conte has picked the same team for Chelsea's last six fixtures, whereas Guardiola has been obliged to chop and change both in terms of tactics and personnel.

It is the legacy of City's involvement in the Champions League, as emphasised last week when they won 2-1 at Burnley having played at Borussia Moenchengladbach in midweek.

Guardiola's need to keep his squad fresh led to a shock recall for the previously sidelined Yaya Toure, who has started City's last two league games.

But with City already assured of a Champions League last 16 place ahead of Celtic's visit on Tuesday, and unable to pip Barcelona to top spot in Group C, Guardiola can align his strongest available team.

The flux in the City first XI partly explains why they have recorded just two clean sheets in 16 league games, although an unsteady adjustment to Guardiola's possession-based philosophy is also a factor.

Chelsea, on the other hand, have looked rock solid and went 600 minutes without conceding a goal before Christian Eriksen's blistering shot put Spurs ahead at Stamford Bridge last weekend.

Guardiola is monitoring the fitness of England winger Raheem Sterling, who was forced off before the hour at Burnley after sustaining a knock.

City have had a full week to prepare for the fixture and John Stones, Ilkay Gundogan, David Silva and Kevin De Bruyne are among the players who could return to the first team.

Captain John Terry remains sidelined for Chelsea due to a buttock problem, while John Mikel Obi is doubtful with a muscular injury.

When Chelsea visited Selhurst Park to face Crystal Palace, everyone thought it would be an easy win for Chelsea. But,... Read More...