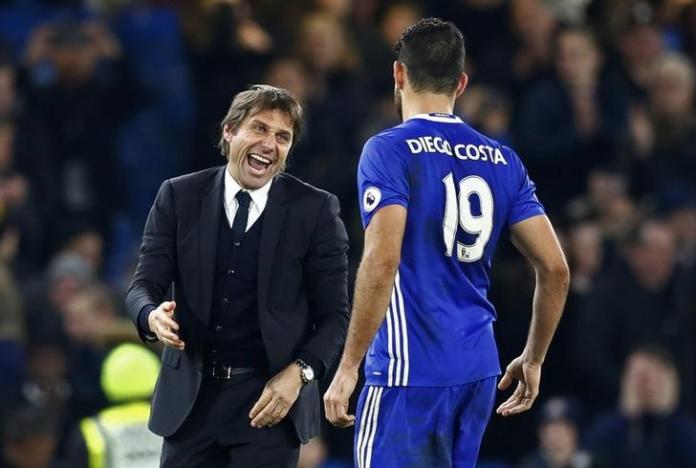 Chelsea striker Diego Costa has credited manager Antonio Conte for the side's record-equalling run of 13 consecutive victories that has propelled them to the top of the Premier League table.

Chelsea, who finished 10th in the league last season, are five points clear at the top and Costa believes the change in the fortunes of the club is down to the Italian manager's close relationship with the squad.

"The manager has come, he's applied his ideas, and things are going well," the 28-year-old striker told the British media.

"That's good for us, to have a manager who is not just a boss, but like a person we can talk with, someone whose support we can count on in difficult moments."

Costa, who is the league's top scorer with 14 goals this season, said he was close to leaving the London club for Atletico Madrid before the start of the season.

"I had the possibility to go to Atletico because of a few things - the family, the life I have there - but not because of Chelsea," he said.

"Here there's a lot of love with the supporters, with the people, so I'm here very happy, I'm very content.

"There was one thing I wanted to change for family reasons but, well, it wasn't to be and I continue (to be) happy here."

Consumer price inflation remained stable at 7.26 percent as of mid-January: NRB
9 minutes ago

Nepse increases slightly by 4.62 points, while daily turnover drops as low as Rs 1.474 billion on Monday
53 minutes ago