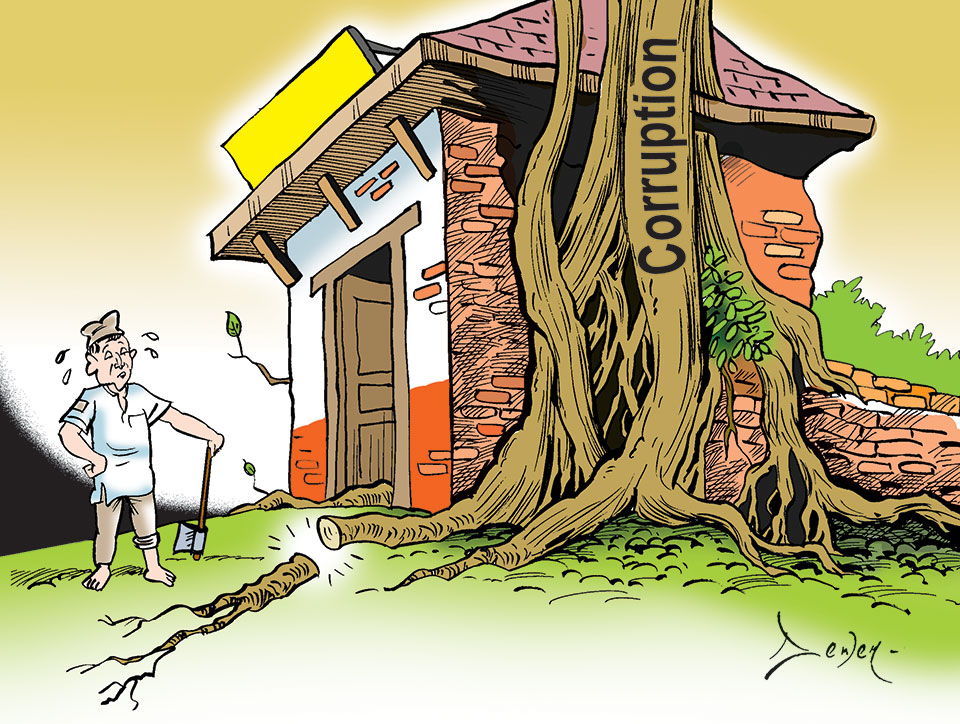 Nepali people need to harness power of social media to pressure the government to fight corruption to improve the level of democracy. Failure to prevent corruption contributes to deepening crisis of democracy

During the Gettysburg Address in 1863, Abraham Lincoln stated that “government of the people, by the people, for the people, shall not perish from the Earth.” He must have thought democracy to be the best political system in the world. Albert Camus, a French philosopher trusted democracy to be the protection of the minority. For Harry Fosdick, democracy is based upon the conviction that there are extraordinary possibilities in ordinary people. If Lincoln, Camus, and Fosdick were alive today, they would probably be extremely disappointed to learn that democracy is in an acute crisis as it has failed to deliver on its promises.

The Athenians invented “democracy” in 500 BC, around the time of the birth of Buddha. This revolutionary idea came into existence because they valued natural law, the notion that human societies should be governed by ethical principles found in nature. The concept of democracy would be discussed, examined, and glorified for the next 2400 years until the establishment of the Soviet Union in 1922. However, the collapse of the Soviet Union in 1991 meant democracy would likely prevail for thousands of years. For the next 15 years, the number of countries that embraced democracy would increase significantly. This glory would be short-lived. People are now extremely dissatisfied with democracy.

The ancient Greeks practiced direct democracy, a system in which citizens convoked and made decisions by majority rule. This model worked perfectly when only elite Athenian men were part of the government. As the nation-states became larger with a diverse population that spread over a geographical distance, the system started to falter, as all educated members of the society could not fit in a single hall to sanely conduct the business of government.

The founding fathers of the United States of America, who modernized democracy, understood the challenges of direct democracy to govern larger countries. They opted for indirect or representative democracy, a system where representatives are chosen by the people to make decisions on their behalf, as it is manageable to put the elected officials in a single room for doing the business of the government. In reality, however, the nescient elected officials usually end up becoming the elites that rarely consult ordinary citizens to formulate policies, plans and programs. Furthermore, most of them usually peculate public money. As a result, a truly representative government becomes an illusion.

The word democracy has also been used in the past to mislead the uninformed and illiterate citizenry. For example, Vladimir Lenin established a communist government and called his style of governance “Democratic Centralism.” He believed a small “vanguard of the revolution” would be necessary to guide the people and establish order. So a small group of leaders made decisions for the people, based on their perceptions of what the people wanted and needed. This centrally managed dysfunctional system collapsed the mighty Soviet Union in 1991 paving the way for liberal democracies in communist countries.

The essential characteristics of liberal democracies are regularly held free and fair competitive elections, equal political rights, right to vote, freedom of speech, rule of law, the independent court system and judges, civilian control of military and above all, peaceful transfer of power from one set of leaders to another following an election.

Democracy in decline
The political pundits in the 90s were mistaken to think liberal democracy was going to be a permanent feature in the world after the fall of the Soviet Union. It was assumed the totalitarian strains of governance would be nonexistent by 2020. Regrettably, we still have authoritarian regimes in countries like North Korea, Syria and Russia. The major characteristics of authoritarian regimes are irregular and unfair elections, intimidation of opposition parties, weak checks and balances on regime’s power, restriction of freedom of the press and suppression of protests, regime-controlled court system and judges, and abuse of human rights.

According to a recent study published by the Centre for the Future of Democracy at the University of Cambridge, global faith in democracy is declining worldwide even though western liberal democracy emerged from the Cold War with renewed legitimacy. People believed the adoption of multiparty democracy would foster greater civic participation in solving diverse problems of corruption, state of fragility, poverty, and the absence of infrastructure.

The findings of the study show that people are relatively satisfied with democracy in the SAARC region. Nepal, however, is an exceptional case.  In each of three surveys since 2005, between half and three-quarters of respondents expressed dissatisfaction with how Nepali democracy is performing. Earlier this month, the Commission for Investigation of Abuse of Authority (CIAA) of Nepal filed a charge sheet against 175 individuals at the Special Court, accusing them of involvement in illegally registering public land in the names of various individuals. According to Patricia Moreira of Transparency International, “Corruption chips away at democracy to produce a vicious cycle, where corruption undermines democratic institutions and, in turn, weak institutions are less able to control corruption.”

It seems the situation will only get worse because the Government of Nepal has drafted various laws that could undermine democracy. The Media Council Bill, Information Technology Bill, and the Mass Communications Bill contain numerous vaguely defined and draconian measures that could undermine free speech.  Even simple and innocent humor challenging the country’s self-pride or prestige would also be punishable with fines and long jail sentences reminding people of the Panchayat era.

Resist restrictions
Until 2015, people of India were also tired of such draconian laws designed to punish people who spoke against the government but things changed. A landmark judgment by India’s Supreme Court annulled the vague and overly broad law on online expression. The Supreme Court ruled that the law was “unconstitutionally vague” and overbroad, and “arbitrarily, excessively and disproportionately invades the right of free speech.”

The fact of the matter is that democracy has to constantly evolve and calibrated in a timely fashion. If democracy is to work best and sustain, the constitution needs to reinforce norms and mutual toleration and restrain the exercise of power. It is up to the people to restore good working order of democracy or let it die. The Internet has made it easier to mobilize protest actions in defense of democracy. The Nepali people need to harness the power of Social Media to pressure the government to fight corruption to improve the level of democracy as failure to prevent corruption is the main contributor to the deepening crisis of democracy.

Shakya was awarded one of the “100 Most Dedicated Professors” by the World Education Congress in 2019. Shah is a Policy Wonk.

KATHMANDU, July 8: Several old cases are pending at the Supreme court (SC) - some for the past two decades... Read More...

KATHMANDU, July 4: After being convicted of Sudan scam by the Supreme Court more than two years ago, former IGP... Read More...