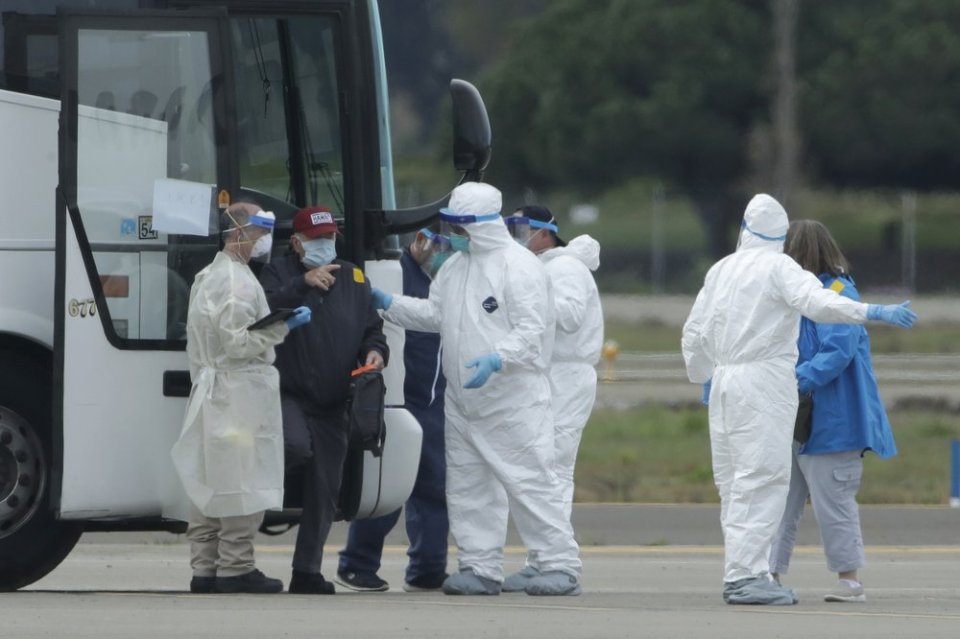 Passengers from the Grand Princess, a cruise ship carrying multiple people who have tested positive for COVID-19, exit a bus before boarding a chartered plane in Oakland, Calif., Tuesday, March 10, 2020. The passengers on the flight are going to San Antonio to be quarantined at Lackland Air Force Base. (AP Photo/Jeff Chiu)

March 11: Alarming clusters of the coronavirus swelled on both coasts of the U.S. on Tuesday, with more than 70 cases now tied to a biotech conference in Boston and infections turning up at 10 nursing homes in the hard-hit Seattle area.

Presidential candidates Bernie Sanders and Joe Biden abruptly canceled rallies because of worries about the virus, and New York’s governor announced he is sending the National Guard to scrub public places and deliver food in a New York City suburb that is at the center of the nation’s biggest known cluster of infections.

On Wednesday, Washington Gov. Jay Inslee will announce a ban on gatherings and events of more than 250 people in virtually the entire Seattle metro area to try to stop the spread of the outbreak, said a person involved in the planning of the decision. The ban would apply to sport events like Seattle Mariners baseball and Seattle Sounders soccer games.

The order would not prohibit the operation of workplaces and is not expected to include school closures, said the person, who spoke on condition of anonymity because they weren’t authorized to discuss the matter publicly.

Santa Clara County in California, home to San Jose and Silicon Valley, on Monday announced a ban on all gatherings of 1,000 people or more.

Also in California, three Transportation Security Administration officers at Mineta San Jose International Airport have tested positive for COVID-19, the agency said Tuesday. They were receiving medical care and all TSA employees who had contact with them over the past 14 days are being quarantined at home, the agency said.

At least 24 people have died in Washington from COVID-19, most in the Seattle metro area. Nineteen of the deaths are linked to one suburban Seattle nursing home and authorities in King County said the virus has spread to at least 10 long-term care facilities

Late last month Inslee declared a state of emergency over the virus outbreak. There are more than 260 confirmed cases in the state, most in the three counties that would be affected by Inslee’s new order.

Massachusetts Gov. Charlie Baker declared a state of emergency as cases statewide jumped by 51 from the day before, to 92. Of that number, 70 are now connected to a meeting held last month by biotech company Biogen at a hotel in downtown Boston.

Baker said the state of emergency will give him greater authority to take such actions as shutting down large events, gaining access to buildings or stockpiling protective gear.

The moves came as the battle to stop the virus from spreading intensified. More schools and universities sent students home, while conferences and other events were canceled. The United Nations announced it would close its New York headquarters to the public and suspend all tours. The Coachella music festival that draws tens of thousands to the California desert near Palm Springs every April was postponed until October. And one of the biggest resort operators in Las Vegas, MGM Resorts International, said it would close buffets at all of its Las Vegas Strip casinos as a precaution.

A top federal health official pointed to Europe, rather than the virus’ point of origin in China, as the likely source for the infection’s continued spread to the U.S.

“Right now the epicenter — the new China — is Europe,” Robert Redfield, director of the Centers for Disease Control and Prevention, said on Capitol Hill. “And there’s a lot of people coming back and forth from Europe that are now starting to seed these communities.”

Authorities in Washington state reported two new deaths from the virus — a man and woman, both in their 80s, who were residents of a nursing home and a senior center. Of the 24 deaths in the state, 19 have been tied to a single nursing home, Life Care Center of Kirkland. But the state officials said they are now working with 10 nursing facilities where residents or workers have been tested positive.

The decisions by both Democratic presidential candidates to call off rallies in Cleveland came as voters headed to the polls for a primary election in neighboring Michigan.

“We are heeding the public warnings from Ohio state officials, who have communicated concern about holding large, indoor events during the coronavirus outbreak,” Sanders campaign spokesman Mike Casca said in a statement. “All future Bernie 2020 events will be evaluated on a case-by-case basis.”

New York Gov. Andrew Cuomo said three schools and other gathering places will be shut down for two weeks in a containment zone in New Rochelle, the epicenter of an outbreak of more than 100 cases. Officials said the National Guard troops will help clean public spaces and deliver food to people quarantined at home in the zone, which extends a mile in all directions from a synagogue connected to some of the cases.

Officials would not say how many National Guard members would be involved, and there was no immediate sign of any troops on the streets. Apart from those who are under quarantine, residents and visitors to the community of 79,000 will be able to come and go freely, with no checkpoints, and businesses can remain open, officials said.

“It is a dramatic action, but it is the largest cluster of cases in the country,” Cuomo said. “The numbers are going up unabated, and we do need a special public health strategy.”

New Rochelle and surrounding Westchester County account for the majority of the state’s 173 coronavirus cases. New York City, with 100 times the population of New Rochelle, has 36 known infections.

The virus has infected more than 800 people in the U.S. and killed at least 29, with one state after another recording its first infections in quick succession. New Jersey reported its first coronavirus death Tuesday. Worldwide, about 118,000 have been infected and over 4,200 have died.

For most people, the virus causes only mild or moderate symptoms such as fever and cough. For some, especially older adults and people with existing health problems, it can cause more severe illness, including pneumonia. Most people recover in a matter of weeks, as has happened with three-quarters of those infected in China.

On Wall Street, stocks surged Tuesday after suffering staggering losses the day before, with the Dow Jones Industrial Average gaining more than 1,100 points on hopes the Trump administration would take steps to cushion the economy from the damage caused by the outbreak.

In Oakland, California, thousands of restless passengers who have been stuck aboard a cruise ship hit by the coronavirus waited their turn to get off the vessel and go to U.S. military bases or back to their home countries for two weeks of quarantine.

“I’m bored and frustrated,” said Carolyn Wright, 63, of Santa Fe, New Mexico. “All of a sudden a two-week vacation has turned into a five-week vacation.”

After being forced to idle for days off the California coast, the ship docked Monday in Oakland with about 3,500 passengers and crew, including at least 21 who tested positive for the virus. Authorities said foreign passengers would be flown home, while Americans would be flown or bused to military bases in California, Texas and Georgia.

About 1,100 crew members, 19 of whom tested positive for the virus, will be quarantined and treated aboard the ship, which will dock elsewhere after passengers are unloaded, Gov. Gavin Newsom said.

Focus on COVID-19 could increase mortality of other diseases