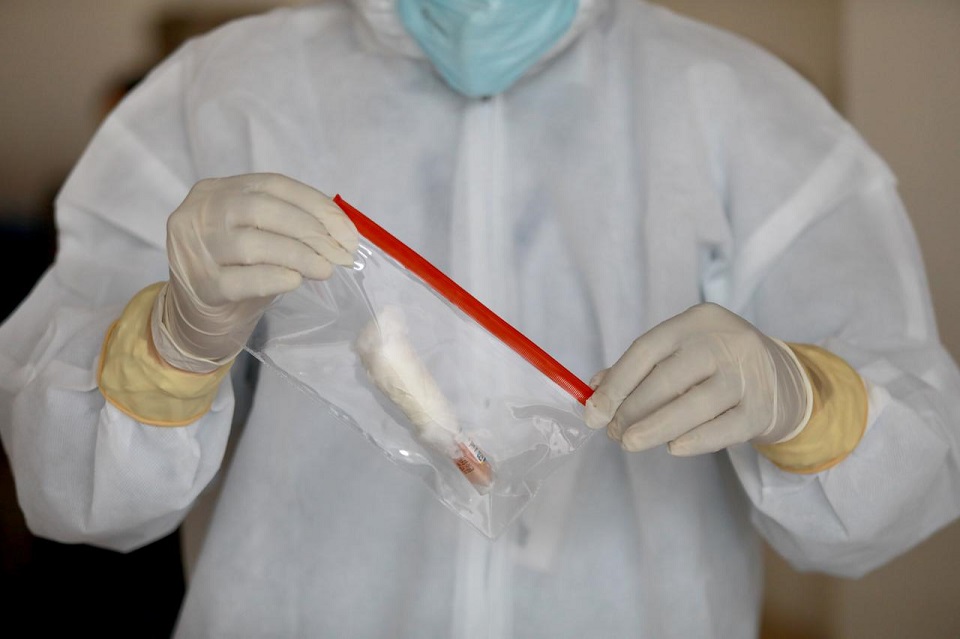 A doctor wearing a protective suit seals a bag containing a swab sample vial, at a testing center during an extended nationwide lockdown to slow the spread of the coronavirus disease (COVID-19), in New Delhi, India, April 28, 2020. REUTERS/Anushree Fadnavis

NEW DELHI/ISLAMABAD, April 28: India was nearing 30,000 coronavirus infections on Tuesday, second only to China in Asia, a steady rise that would make it difficult to lift a nearly six-week lockdown that ends this weekend, health officials and some government leaders said.

Neighbouring Pakistan also recorded a jump in cases and deaths from COVID-10, the respiratory disease caused by the virus, and there were concerns that many people were gathering in mosques for Ramadan prayers despite strict rules on distancing.

Indian Prime Minister Narendra Modi’s government has allowed some farm and industrial activity to resume in less-affected rural areas after the shutdown of the economy left millions without work and short of food and shelter.

But with about 1,500 new cases each day on an average over the past week, the government is facing calls not to ease further and instead keep the world’s biggest shutdown in force beyond May 3, even though the economic distress is deepening.

“India is still on the ascending limb of the epidemic curve and so to ease the restrictions will mean the cases will multiply uncontrollably,” said Dr S.K. Sarin, who leads a government group tackling the outbreak in the capital, New Delhi, one of the hotspots.

The number of people infected with the coronavirus stood at 29,434, the health ministry said, a rise of 1,543 over the previous day. So far 934 people have died, a small number compared with the United States and parts of Western Europe where tens of thousands have died.

But India’s healthcare systems are much more limited than those in developed countries and the fear is that a surge in cases of the kind seen in the United States and Italy could easily overwhelm public hospitals.

“We are recommending that the lockdown be extended after May 3. No mode of public transport be allowed between states,” said Pramod Sawant, chief minister of Goa that draws hundreds of thousands of tourists to its beaches from within India and overseas.

NO FACE MASKS OR DISTANCING

Pakistan had 14,079 cases including 301 deaths, 20 of them over the past day the highest single-day toll so far. Pakistan, which the World Bank said could tip into recession in the current fiscal year, has opened 600 export industries, mainly in Punjab and Sindh province, to reduce the pain for businesses and workers.

A bigger problem was congregations at mosques because the ground rules for such gatherings were not being followed, a leading non-government organisation said.

Pakistan, under pressure from religious groups, allowed people to pray at mosques during the holy fasting month that began last week provided they kept six feet apart, wore face masks and did not pray in the streets.

But Pattan Development Organisation said the rules were largely violated in the 194 mosques it surveyed in 15 cities and towns.

“In more than 80% of the mosques of Punjab and Islamabad, imams have failed to implement the government-clergy agreement during the first Taraveeh congregations on Friday evening,” it said. Taraveeh refers to special prayers offered during the month.

Most worshippers didn’t wear masks and few kept distance from each other while a large number were praying on the streets, it said, warning many could be contracting the virus and carrying it into their homes.

In more than two-thirds of the mosques monitored, children were also seen alongside their elders.

“This is indeed a very dangerous situation. Authorities and clerics should know that one infected person can cause massive harm,” Pattan said.

* Afghanistan has reported 1,703 cases, including 57 deaths

* Maldives has reported 200 cases and no deaths

* Nepal has reported 54 cases and no deaths

KARNALI, Feb 10: Active cases of COVID-19 infection in seven districts in Karnali Province have dropped to nil, according to... Read More...