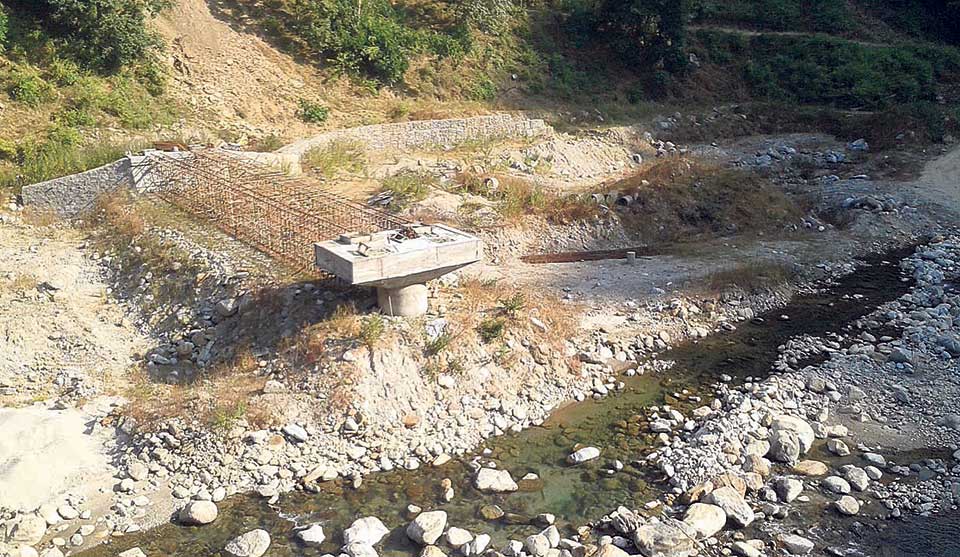 ILAM, Nov 17: Negligence of the contractor has put Dudhang bridge of Ilam-Soyang-Nayabazar road section in limbo. Although the deadline has been extended twice, the completion of the bridge is still uncertain.

The contractor, National/Nilgiri JV, had received the project on July 11, 2014, with a deadline to complete the bridge within two years. The deadline was extended first by six months and then by two months as it was certain to be missed. It has been eight months after the second extension passed, but merely half the work has been completed so far.

The road section connecting to the bridge has already been graveled from where dozens of vehicles pass every day. However in lack of a bridge, passengers have to cross the river on their own which is extremely risky during the monsoon season.

According to the road division office, the bridge project is worth Rs 61.2 million. According to engineer Dhruba Kumar Jha, the contractor has been ignoring frequent written directives from the division office to complete construction.

“We have sent several letters to the contractor. But they don’t act properly. Only 40 percent of construction has been completed so far,” he said. “We do not see any reason to give them more time.”

According to division chief Khadga Bahadur Shrestha, the contractor had committed to begin the work from mid-August, but they are yet to begin.

As per the division office, the contractor has already received almost 40 percent of payment for the construction.

However, the contractor has claimed that the delay was due to design change from the concerned authorities. Yuvraj Dangi, representative of the contracting company, said: “Design for the bridge had been changed in the middle of the construction, which had affected our work.” He said that construction would be resumed within three or four months.

Child goes missing in a drain in Kathmandu. Who is responsible?
11 hours ago

MCC should be passed after revising some provisions: Thapa
7 hours ago

Progress toward SDGs disappointing
6 hours ago

Nepal feels like home to me: Afridi
10 hours ago