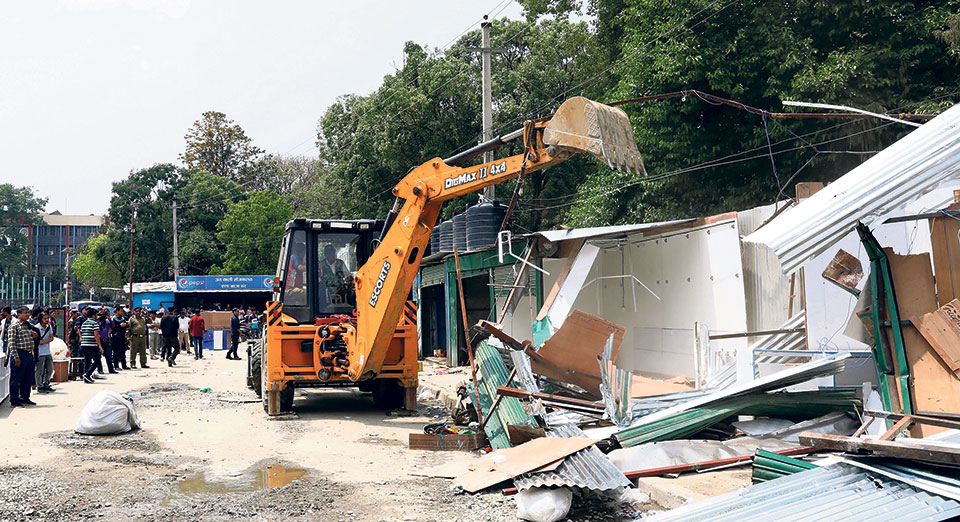 KATHMANDU, April 30: After shopkeepers at the Khulamanch open-air theatre at Tundikhel, whose shutters were demolished by  Kathmandu Metropolitan City (KMC) on Saturday,  complain to police about having been defrauded, Manoj Bhetuwal, the contractor, has started returning the money he collected from them.

Bhetwaul has a contract from the metropolis for using the Khulamanch space, without however constructing any structures there. He has illegally collected about Rs 1 million each from the shopkeepers. There were 40 stalls in total.

One shopkeeper claimed that about a dozen shopkeepers were called by the contractor to his Khulamanch-based office and given back the money they had submitted to him.
Sujan Tamang of Nuwakot said the Rs 700,000 taken from him by middlemen was returned on Monday. Tamang, along with some fellow shopkeepers had gone to the Nepal Police Public Service unit claiming that they had been defrauded.

According to Deputy Superintendent of Police (DSP) Basudev Khadka,  police officials had advised the shopkeepers to file a complaint of fraud so that action could be taken against the contractor.
“We only advised them to file a complaint,” Khadka told Republica. “However, even before any complaint was filed, the contractor seems to have started returning the money  to the shopkeepers.”

He added that it was not clear yet how many shopkeepers have received their money back.
Manmaya Gurung, another shopkeeper, said that she is yet to receive any money back but hoped she would be reimbursed soon. “I have heard that the contractor has started returning the money,” she said.

The move by the metropolis to clear the shop shutters came amid mounting public pressure. Structures such as toilets, canteens and public bus ticket counters built in the area were not affected by the action.

Earlier, a section of social activists had submitted a memorandum to  KMC Deputy Mayor Hari Prabha Khadgi demanding that the illegal structures built at Khulamanch be demolished.

On Friday,  Mayor Bidya Sundar Shakya had asked Deputy Mayor Khadgi to inspect the structures. Khadgi was supposed to submit a report of the inspection on Sunday but Mayor Shakya took the decision to demolish the structures on Saturday before Khadgi could submit her report.