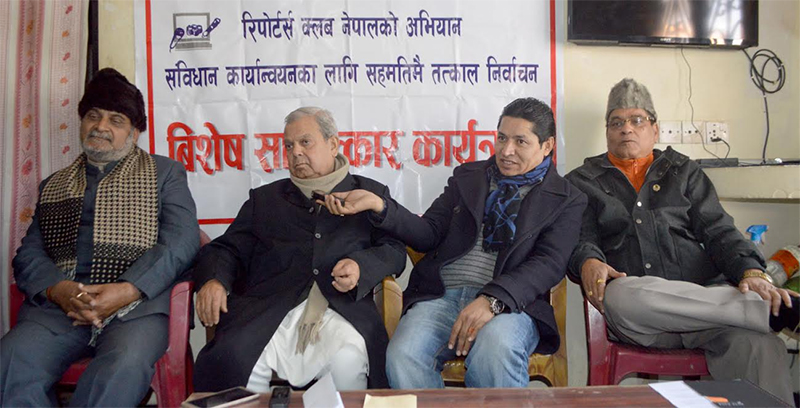 KATHMANDU, Jan 5: Senior leader of the United Democratic Madhesi Front (UDMF) and Chairman of Tarai Madhes Democratic Party (TMDP) Mahantha Thakur has said that the constitution amendment bill will be endorsed with amendment.

Talking to Reports Club Nepal in the capital on Thursday, Thakur said that the constitution amendment bill will be endorsed following the amendment proposal that we will submit at the Parliament.

“In the Legislature-Parliament meeting to be held on January 8, we will submit amendment proposal from our side then the NC, CPN-UML and CPN (Maoist Center) will endorse the bill with amendment,” said Thakur.

He further said that Article 274 of the Constitution should be annulled as it is against the spirit of the federal set-up.

“It is meaningless for the CPN-UML to protest the amendment bill,” said Thakur, adding, “The proposal had been floated by the UML leaders themselves.”

Expressing grievances over the works of the Local Bodies Reconstruction Committee, Thakur called for delineating the local units on the basis of population.

There is 51 percent of the Nepal’s population in Tarai, claimed Thakur.

Constitution amendment bill can be revised and endorsed: Kamal Thapa

Constitution amendment bill will be endorsed by majority of votes: Deuba