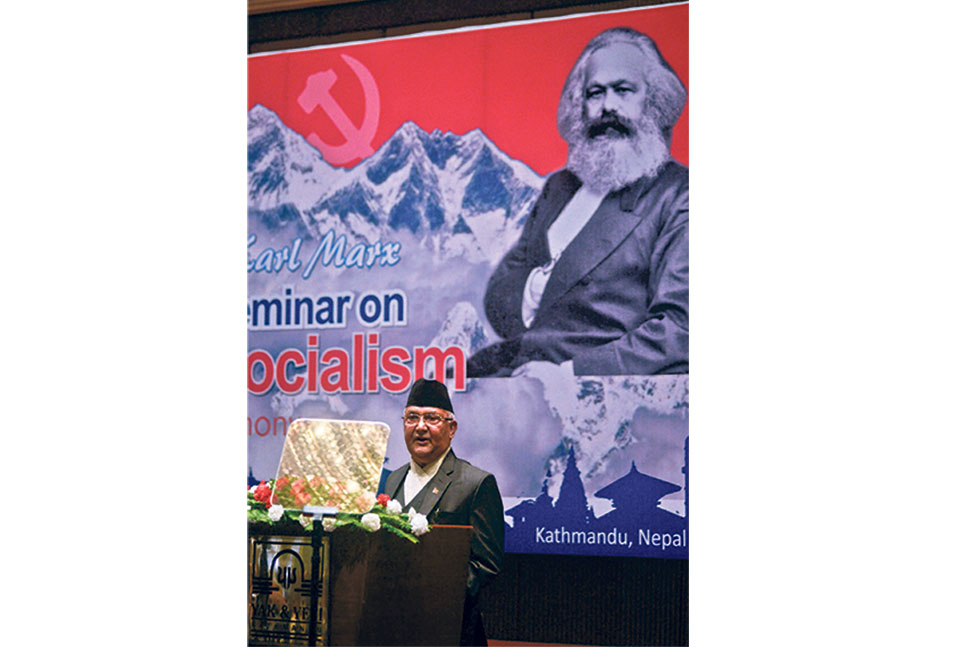 Nepal Communist Party Chairman and Prime Minister KP Oli addresses the opening ceremony of the International Conference on Marxism and Socialism at Kathmandu on Wednesday. The two-day conference was organized to mark the bicentenary of the birth of Karl Marx, propounder of Marxism. Photo: Bijay Gajmer/Republica

KATHMANDU, May 31: Prime Minister KP Oli has said that Nepal is in a position to peacefully achieve its goal of socialism by stepping in the provisions set in the constitution promulgated by the elected Constituent Assembly (CA).

Inaugurating a two-day international conference on Marxism and socialism in the capital on Wednesday, Prime Minister Oli, who is also the chairman of the newly-formed Nepal Communist Party (NCP), said that the party has pursued constitutional and legitimate path and popular mandate of the people to reach the goal of socialism.

In his 4,500-word long paper on Innovative Applications of Marxism and Nepali Communist Movement, Oli appreciated the decade-long armed insurgency launched by the then Communist Party of Nepal (Maoist). His paper highlighted the roles played by both peaceful and armed revolution launched by the communist parties to bring about political change in the country.

“Maoists waged armed insurgency in February 1996. The decade-long conflict brought about awareness among the traditionally marginalized people, eliminated feudalism, made constituent assembly and republicanism the national agenda and promoted inclusiveness in politics,” Oli said in his paper.

Prime Minister Oli said that the objective of the communist parties in Nepal is to graduate Nepal into developing country from least developed country (LDC) within five years and middle-income country by 2030. He argued that the communist parties in Nepal had been able to set an example to the world by securing two-thirds majority and more than half of the total votes cast in the recent elections.

“Our destination is clear – to develop socialism with Nepalese characteristics. Our priority is also clear – to promote nationalism, develop democratic institutions, strengthen national unity with social harmony, achieve social justice by abolishing all forms of discrimination, inequality and exploitation and achieve economic development and prosperity within a short span of time,” said the prime minister.

The organizers said senior leaders of 22 communist parties from various 16 countries are participating in the conference which will conclude on Thursday.

Leaders participating in the conference will apprise of the condition of communist parties in their countries and the activities they are pursuing. On the occasion, another chairman of the NCP, Pushpa Kamal Dahal had presented a paper on the situation of socialist revolution.

Former Prime Minister Madhav Kumar Nepal, who is the coordinator of the conference, said the success achieved by communist party in Nepal through electoral competition had set an example to communist parties elsewhere in the world.