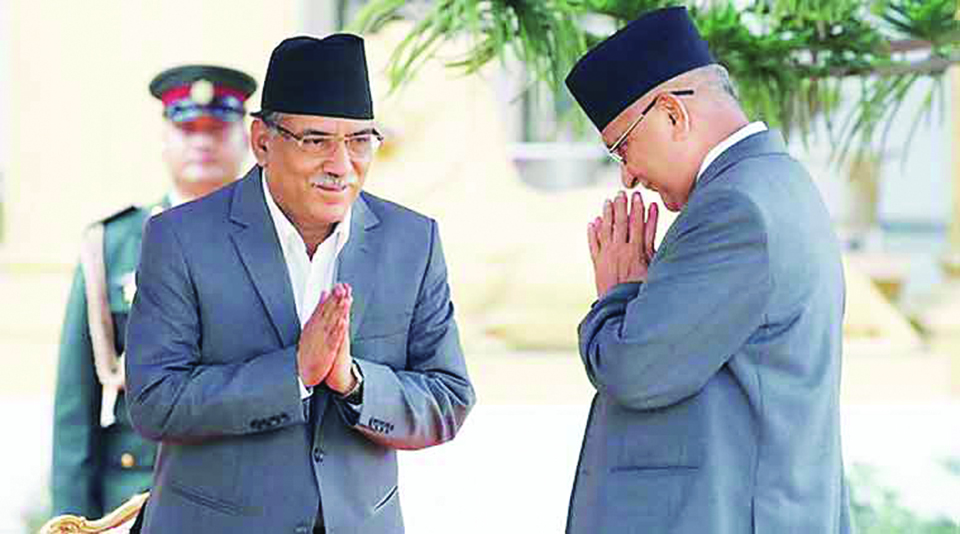 Officially, both Oli and Dahal are equals. Effectively, Dahal is a lightweight and, practically, Oli stands as the effective heavyweight at least for the next year and a half

Icicles come in the way of camaraderie between Prime Minister KP Oli and Pushpa Kamal Dahal, the president equals in Nepal Communist Party (NCP). Party workers can patently sense cold vibes running between the NCP twin chiefs. Dahal’s recent visits to India and China have not gone down well with Oli. Dahal does not accept Oli’s position as consonant with his, and vice versa. Discordant notes lurk behind the civil exterior of the ruling NCP’s supposed co-equals.

“Serious discussions were held,” Dahal announced on his recent return home from a visit to India. The VVIP treatment accorded to him in New Delhi was strategic. Prime Minister Oli would have received the same, except that the former armed Maoist leader was not conferred an honorary degree from any university. Dahal’s much-craved for visit to Beijing and a meet with Chinese President Xi Jinping came in for a stinging rebuff, leaving the former Maoist insurgent leader in distraught. Xi and Indian Prime Minister Narendra Modi have the practice of exchanging notes on common immediate neighbors and major powers.

In sealing the merger deal, Dahal wanted to stem the steep decline in his party’s electoral fortunes and Oli was keen to command a firm majority as the head of the government. However, the positive vibes expected from the Oli-Dahal duo in sharing the positions of party president equals—ridiculously unique—are simply missing. The seemingly cordial course of communication is, at best, a marriage of convenience or perhaps opportunism.

Maoist Center faction members are put off by the airs put on by Oli’s coterie. To his advantage, Dahal has a firm grip on the Maoist faction in the ruling communist party whereas Oli’s group demands details and discussions before decisions. Dahal can choose to sign on the dotted line with the confidence that he can have it endorsed by his camp. Rancor grips Dahal and his foot soldiers who risked life and limb to bring about the loktantrik revolution: when it comes to enjoying the lush fruits of power, it is the UML that scores. They are losing sleep over the itch to be at the top of the power structure, which means the party has not been able to walk the unification declaration and public posturing.

The NCP chiefs may speechify about national and international connectivity, but the same is missing between them. The required wavelength expected from a truly unified party eludes the organization. The essential cement called declaration of unification is too thin to conceal the vertical crack. This has made the government’s two-thirds majority look weak, limp and insipid. Do the deaths of 17,000 men, women and children weigh on the NCP mega-equals? The standard bearers of the sweeping changes crib that they are out of range when it comes to heading the government.

The trappings associated with the India visit contrasted sharply with the China trip a few days later. He was a VIP in China as against the all, but declared VVIP treatment in the Indian capital. That was Beijing’s clear message to the Nepali communist leader who for years used to proclaim and proudly don the tag of a Maoist. The China visit might not have been as busy and detailed as the ones of former King Gyanendra and former Crown Princess Himani in 2017, but it did unsettle Oli and his team, until the abrupt switch in Dahal’s China trip’s informal itinerary. The former prime minister thus returns home rattled and with less self-confidence vis-à-vis his relationship with the Chinese leadership.

Oli gets the jitters from Dahal’s movements. There is uncertainty in his camp, which, banking in reflected glory and clinging on to the coattails of its boss, has started believing that it is the true lord of all it surveys. From the beginning, the team was distressed about Dahal’s visit plans. “What for? Everyone knows why,” spurted an enraged Oli aide after the announcement six weeks ahead of Dahal’s visits to the two neighboring capitals. Tormenting thoughts seized Oli’s lieutenants.

Baluwatar incumbency is the bone of contention. Arising from the crucible of crisis, Dahal’s recent utterings characterize his latest state of mind. In the past couple of months he has begun comparing himself to what Buddha and Ashoka achieved in the later and more lasting chapters of their lives. He also admitted “mistakes were made”, but not without hastening to add: “No one is infallible. Even great figures had committed errors.” On several occasions, he regretted not having been awarded the Nobel Peace Prize.

During his New Delhi meeting with Indian Home Minister Rajnath Singh, Dahal downgraded everything of Nepal’s political past since the very foundation of a united Nepal over two centuries ago, disparaging also Prithvi Narayan Shah’s description of Nepal as a yam between two boulders. It is reliably learnt that the Indian home minister let the visitor do most of the talking, as the host must have sized the guest who, during his two stints as premier, just could not deliver into action the promises made to the people for the last 20 years.

Did the issue of weapons, believed to have been stockpiled in western Nepal, figure in the talks with the officials of the two neighboring countries? Reports, planted by Indian government agencies, suggested that a huge cache of arms was set to cross the border to India. Who might have been the intended target? Which group in Nepal could possibly possess such a stockpile? Could any group have made clandestine contacts with Indian Maoists known as Naxalites? Dahal has long maintained that his outfit’s weapons were “carried away by swollen rivers”. Weapons, money and gold were reportedly split and stashed away by a number of Maoist leaders. How were the weapons disposed off and who were their last possessors?

If the weapon issue did come up during the talks, it would underscore the concern with which Beijing and New Delhi view the situation. China is extra alert about any likely cross-border arms movement. In the 1960s to mid-1970s Tibetan rebels were equipped with arms and money by the Central Intelligence Agency of the United States.

Will Dahal bill Oli for the patience he has held so tightly so far? Madhes-based leader like Rajendra Mahato and Nepali Congress parliamentarian Amresh Kumar Singh advise their followers to wait and watch until winter-end, by which time an “appropriate” pressure could be applied on the government. In the rough and tumble of Nepali politics, money is the lubricant, big powers support the fuel and prospects of power the clincher.

The maverick Dahal, who once breathed fire and brim storm, is now a malleable man with money and media attention but ready to abandon many a principle the revolutionary decade nursed and promoted if it inched him closer to power. His flair for juggling power brokers and favor-seekers is an established fact. His hope of utilizing his visits to the neighboring nations for recharging external support for his ambitions at home seems to have run into a deep shock, though.

A united spirit in words and deeds between the two major factions in the ruling NCP would be a miracle for at least a generation. Officially, both Oli and Dahal are equals. Effectively, Dahal is a lightweight and, practically, Oli stands as the effective heavyweight on the stilts of the constitutionally stipulated unbreakable position for the next year and a half, barring unforeseen developments with grave consequences.

It is an agonizing time for the former guerrilla leader, who will have to find consolation in small mercies extracted from his more powerful equal. Oli, likewise, remains a hapless executive head of the country, even if heading a two-thirds majority government. The prime minister strenuously struggles to find a firm footing and gather the momentum persistently eluding him for the last seven months. Another former Prime Minister Madhav Nepal’s unprecedented criticism of his own party government in parliament on Thursday might portend an ominous sign for Oli in the long term.

KATHMANDU, May 4: The unification talks between the ruling CPN-UML and CPN (Maoist Center) seem to be gaining momentum as... Read More...