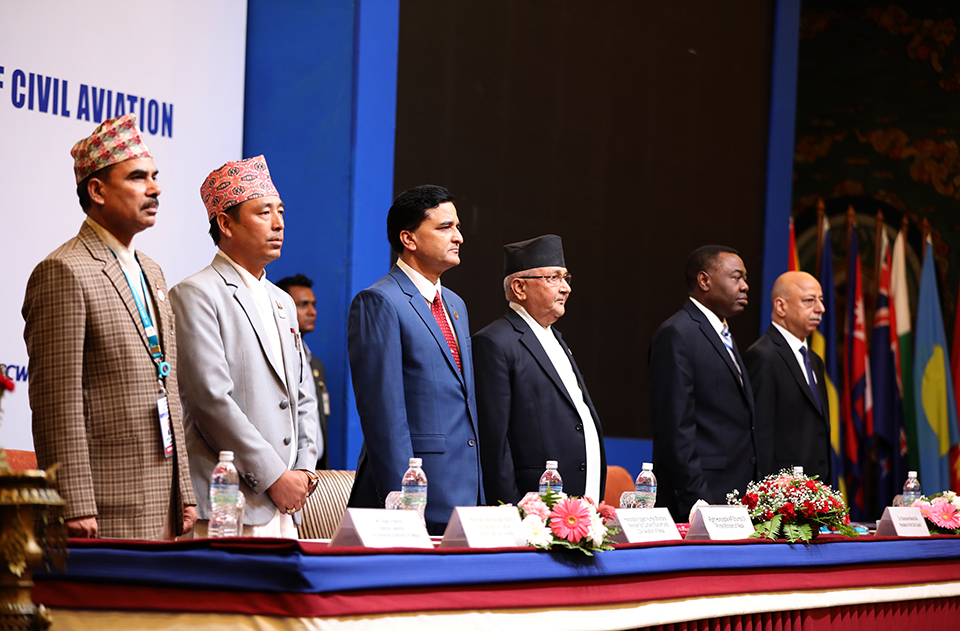 KATHMANDU, Aug 19: The 56th Conference of International Civil Aviation Organisation (ICAO) Director Generals for Asia and the Pacific has kicked off in Kathmandu today. The Conference is attended by 390 foreign senior officials from 46 countries in the Asia Pacific. The event is organized by the Civil Aviation Authority of Nepal (CAAN).

Inaugurating the Conference, Prime Minister KP Sharma Oli expressed his hope that it would help in determining the future strategy for strengthening safety, for infrastructure development and capacity enhancement in the aviation sector. He spoke the need for combined efforts to enhance quality in aviation service by adopting related advanced technology and global new innovations.

Stating that Nepal was achieving progress in the aviation safety and sector lately, Minister for Culture, Tourism and Civil Aviation Yogesh Kumar Bhattarai shared that many measures were initiated to make the aviation sector in the country more effective as per the criteria set by ICAO. Expressing gratitude for handing over the ICAO President Council Certificate in recognition of the progress Nepal made in the aviation sector, Minister Bhattarai stated that works relating to reforms at policy-level were forwarded and laws would be formulated to establish the Authority as a regulatory and service-provider body.

Authority's Director General Rajan Pokharel expressed his confidence that such a conference would further support to make Nepal's aviation sector more credible as Nepal was steadily witnessing reforms in is the aviation sector. He shared that the construction of the under-construction international airports was expedited while the favorable environment has been enabled to upgrade the only international airport in the country-Tribhuvan University.

On the occasion of the 75th anniversary of ICAO, Nepal organized the summit this year. ICAO has 193-member nations including Nepal. This is the third time Nepal is hosting such an event. ICAO's banner was hoisted atop the Everest (Sagarmatha) this spring to mark its 75th anniversary. On the occasion, Minister Bhattarai handed over the same banner to the ICAO's President Aliu.

The presence and participation of the high-ranking foreign officers from the aviation sector in this summit is believed to send across a positive message about Nepal's aviation and tourism sector. The Conference will dwell on the enhancing technical capacity, developing physical infrastructures to ensure safety and security in the aviation of the Asia Pacific Region. The conclusions to be drawn from this Conference will be presented in the 40th general assembly of the ICAO to be held from ICAO's headquarters in Montreal.