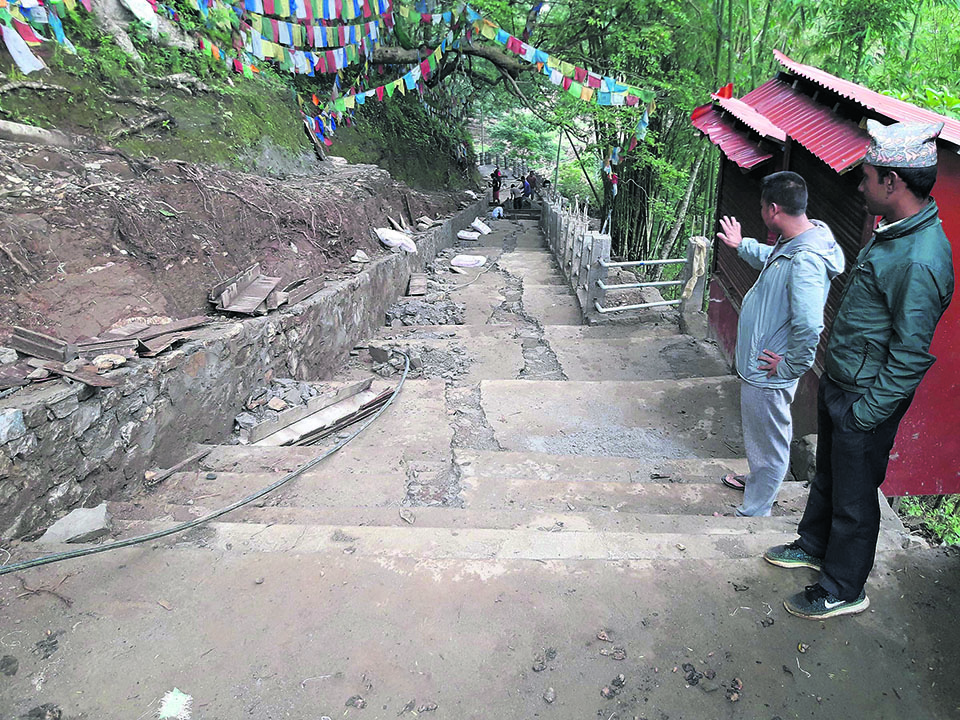 KHOTANG, July 23: Even before it could get the finishing touches, a concrete staircase being built at the highly revered religious spot of Halesi is full of cracks and holes. The provincial government had released Rs 3 million through the district coordination committee for the project.

The five meter wide staircase and railings were being erected from Basahanath to Rithabote. And  now even before the construction has come to completion, its repairing looks urgent.

According to technicians, it's not only the substandard materials used in the construction but also the improperly prepared mixture of the materials that are to be blamed for the poor construction of the staircase. As a result, the plaster has developed cracks even before it got settled.

"It has been learnt through technicians that the quality was compromised. They did not use quality materials, nor did they properly did the mixing," said Sambar Bhujel, managing director of Halesi Mahadevsthan Development Committee. "Now there is a need for reconstruction. We cannot compromise the safety of the devotees," he added.

Halesi is a pilgrimage to Hindus, Buddhists as well as Kirants. Hundreds of thousands of people reach the spot throughout the year. The crowd of visitors gets thicker during religious events. In view of the ever-growing number of visitors, the authorities had decided to build a safe and comfortable staircase to the temple on the hilltop.

A local consumers' committee, which is responsible for the project cited the lack of time for the poor result. "Had there been enough time, the plaster would not come off," said Devraj Rai, chairperson of the consumers' committee. "The wall is strong. The problem is with the stairs. There was not enough time for the mixture to settle down, we had to plaster it in a rush," he said.

"Similarly, the garden along the railing hampered it. The base soaked water collected in the garden and turned it weak," Rai explained. 'The recent rains affected it.'

The committee was expected to complete the work by the end of the last fiscal year for which budget was released a month before. This kind of 'last minute' release of budget and last moment delivery of work has hampered small to big projects in the country for long.

According to Iwan Rai, mayor of Tuwachung Municipality, the municipality is unaware of the entire issue. "Neither we know the source of the budget for this project, nor do we know how that was spent," Mayor Rai said. "But as we see the work now, it's disappointing. There's no quality," he added.

SINDHUPALCHOWK, July 10: It has been difficult to carry out a rescue operation in flood-hit regions in Sindhupalchowk district as the... Read More...