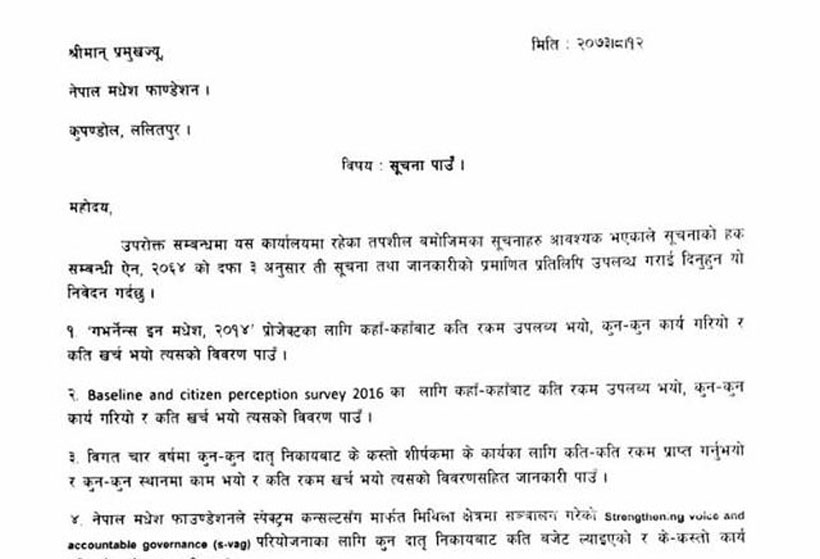 KATHMANDU, Dec 13: A complaint has been filed at the National Information Commission against the Nepal Madhes Foundation (NEMAF) accusing it of embezzling donations received through various donor countries in the name of uplifting the economic status of Madhesi communities.

Tulanarayan Sah, a political analyst, is the in-charge of the NEMAF.

“I filed a complaint at the office of the Foundation based in Kupondole, seeking information on the financial transaction of the foundation but the office refused to receive it,” Arun Kumar Sah of Janakpur told Republica Online.

Then I filed a complaint at the National Information Commission, he said.

The complaint has been filed at the National Information Commission seeking information on four projects being run by the Foundation in line with the law.

They are Governance in Madhes-2014, Baseline and Citizen Prescription Survey-2016, Strong Voice and Accountable Governance operating in Mithila region under Spectrum Consult, among others.

Sah has sought information including the total donation the NEMAF has received from the donor countries so far, details of expenses and its achievements.

However, Sah said that he has not received the sought information so far.

As per the existing law, the NEMAF will be penalized if it does not furnish information within 15 days of the complaint filed.

In the complaint, Sah has sought information of public concern invoking the Right to Information Act, 2007.

At a time when the trend of receiving a huge amount of donation from donor countries and spending it in an opaque manner is growing, a case has been filed at the National Information Commission against the NEMAF.

The NEMAF was established in 2007 by a group of like-minded youths to contribute to a socially, politically and economically developed Madhesh by creating a critical mass of effective civil society in Madhesh/Terai.

KATHMANDU, May 16: A right to information (RTI) application has been registered at the National Information Commission (NIC), claiming that the... Read More...