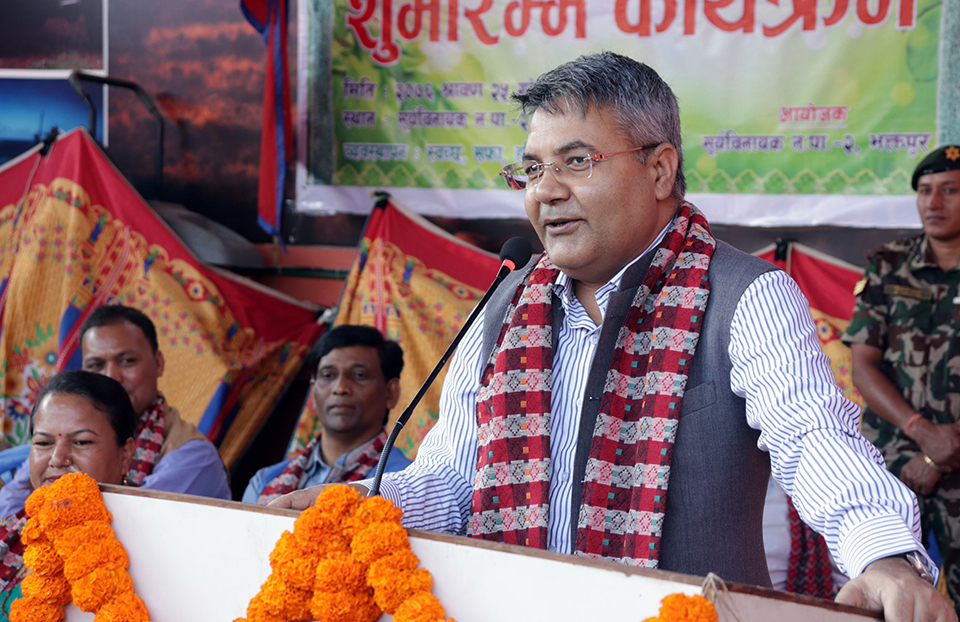 BHAKTAPUR, Aug 10:  Minister for Communications and Information Technology Gokul Baskota has warned that human beings would suffer the fate of dinosaur if the environment was not protected on time.

Inaugurating a greenery campaign at Balkot of Surya Binayak Municipality-2 on Saturday, the government spokesperson said there was a risk that humans could be extinct as of dinosaur due to self-invited consequences.

"Mountains are at the receiving end of the operation of big industries; environment pollution is increasing and now our actions depend on whether we want to be at the status of the extinct creature."

According to him, development is for the good causes of earth and human beings and the human life could face a grave crisis if timely measures were not taken for reforestation, environment protection and the protection of mountains. "Impact of rampant industrial development has been seen on snow melting and Nepal, India, Pakistan, Bangladesh and Bhutan have already faced its consequences," he reminded, underlining the need for collective efforts to protect the environment.

Expressing his concern over the culture of blaming, Minister Baskota said, "We, human encroach on a public path, refuse to contribute a little land to widen the road and accuse the government of not managing paths properly. We chose the street to throw garbage and criticize the government for controlling pollution. Humans should give up this culture."

He spoke of the need of becoming self-dependent on fruits production, presenting an idea that fruits plants could be cultivated along the roadsides. Lawmaker and former Industry Minister Mahesh Basnet pledged that there would be no lack of drainage, roads and drinking water in the district in the next three years. The inaugural session of the campaign is named " Public-Private Cooperatives Journey: Healthy, Pure and Clean Road Promotion Campaign" was attended State Assembly Member Shashi Jung Basnet, Surya Binayak Municipality Deputy Member Juna Basnet and environment campaigner Chandra Krishna Shrestha among others.

As open spaces continue to shrink and big houses are blossoming around, there is less chance of surviving if an... Read More...

Sundar puts India in charge, made to wait for maiden century
21 minutes ago