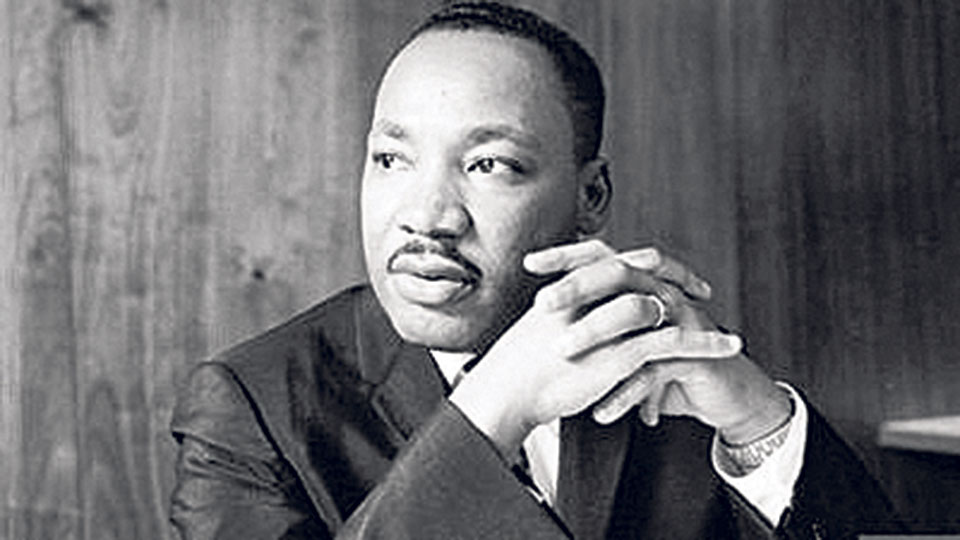 Today is a special day in the United States of America but actually this same day should hold a very special importance throughout the world, including Nepal. It is a special occasion because it celebrates Dr Martin Luther King, the civil rights hero who sacrificed his life for freedom, justice and equity for all, especially for those citizens who were the descendants of African slaves, who for centuries, had their basic rights denied and for whom King fought a peaceful battle.

Every year, the third Monday of January is observed as a public holiday in the US to commemorate him.

It is a day to remember the peaceful struggle of one of the biggest modern history heroes for the rights of oppressed citizens but also it is an important recognition to celebrate King’s vocation for service, showing, through practical deeds, the real meanings of being supportive of those in needs, regardless of the color of their skins, their economic status and social economic background.

That’s why Martin Luther King’s day, also called MLK Day, is known as “national day of service”, where all American citizens are invited to fulfill their duty to volunteer and serve their communities.

Often we forget how relevant and essential volunteering is for the humanity. It is one of the greatest expressions of “being” human and this is going to make the difference, especially in relation to artificial intelligence driven machines that are poised to take over many aspects of our daily duties and responsibilities.

It is one of the most powerful ways to show that we are “alive” and “connected” to each other and remind ourselves that we need to help others in times of need. Volunteering is showing solidarity with actions, small or big. As long as you empathize with those less fortunate and as long as you make a commitment to do something for them, that’s what matters. Volunteering is naturally embedded in each of us.

While there are millions of people out there all over the world who are showing leadership for justice by committing their time and energies, exactly like King did, making the world better, vast majority have actually forgotten about it or perhaps they have never ever realized that helping others is intrinsically human.

“Everyone can be great because everybody can serve,” Martin Luther King once said. There is no greater statement to prove our individual and collective mission and mandate that we are here also to make the difference for those less lucky.

It is not a coincidence that the name of the organization that King led as its first president was called the Southern Christian Leadership Conference, a not-for-profit that till now fights the injustice in the US. We can lead better lives by committing ourselves to a cause or by simply being willing to step up and help out whenever there is a need of.

Too many people are still unaware of importance of volunteering and despite the very real surge of artificial intelligence that will upend our ways of lives, we need to ensure that this positive and different ways of doing leadership is going to get stronger rather than swept away from this upcoming tornado of technological innovation.

It seems that the future is going only to be about coding and technological innovation but what about learning the key and essential traits of leading meaningful and generous lives, contributing not as professional social workers but rather as responsible and engaged citizens?

In an emerging country like Nepal we need so much of this different kind of generous and compassionate leadership shown by King and many other less famous people. I would say we need to include the concept of “leadership for others” in the national curriculum of Nepal.

Why not conducting massive training of trainers’ exercises where teachers from public and private schools alike undertake transformative leadership classes where they can rediscover their true role of change makers rather than being just passive transmitters of knowledge? Rediscovering the meaning of character and the importance of holding positive values, they could read and reflect about inspiring stories of global icons like Martin Luther King and of many other less celebrated and yet important social leaders.

Understanding the importance of practicing civic engagement is going to come next and this aspect is particularly important for Nepal where citizens are supposed to step up now that they are the decision makers. Many youths of this nation are promising leaders.

Having the chance to learn about a different way of doing leadership, one based on altruism, solidarity and justice can redefine the meaning of citizenship in the 21st century, offering tangible tools to all youths who want to make a positive difference in the country. It is high time we found a way for likeminded civic leaders from all over Nepal to come together and chart a new way of promoting civic engagement. Taking inspiration from Martin Luther King, perhaps we could set up an informal forum where new ideas for better and more just Nepal are planned and nourished. Happy MLK Day!

The author is the Co-Founder of ENGAGE, an NGO partnering with youths to promote social inclusion in Nepal
Email: simone_engage@yahoo.com

KATHMANDU, May 3: A rally was taken out this morning to mark the occasion of the World Press Freedom Day 2018. Read More...

KATHMANDU, June 28:The District Court, Lalitpur on Monday has handed down life term to the murderers of Justice Rana Bahadur... Read More...