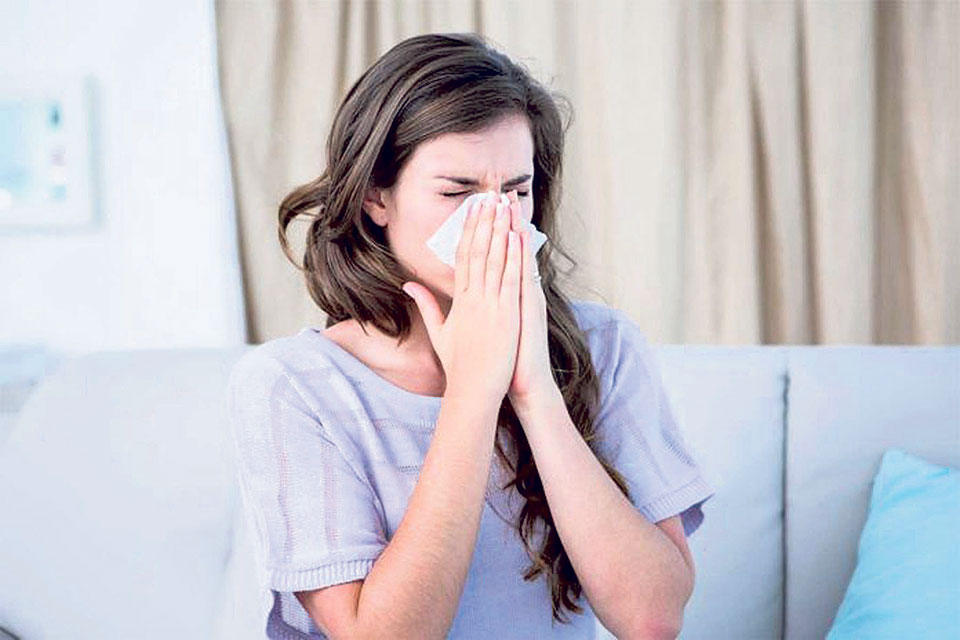 For many, a stuffy nose has been this seasons’ most common health problem. Not only does it make breathing difficult but you also suffer from headaches due to it and getting a goodnight’s sleep becomes next to impossible. The Week consulted Dr Sahana Phuyal, otolaryngologist at Surya Polyclinic in Kathmandu, to find out some simple cures for this persistent problem. Here’s what she had to say.

Take a hot shower
Taking a hot shower is one of the best and most basic ways to unblock a stuffed nose. If you cannot hop into a hot shower then taking a steam or just pouring hot water over your nose for a few minutes will also have a very similar effect. Do not stay in the shower for too long though because that will do your nose more harm. Just jump into a hot shower, quickly clean yourself up, turn off the water and dry yourself up with a clean towel. The steam from the hot water will thin out and drain the mucus from your nose. It will also reduce inflammation and improve your breathing quite significantly.

Use a warm compress
Another no-fuss way to deal with a clogged nose is with the use of a warm compress. Anyone who does not know how to prepare a warm compress can just follow this simple set of instructions. Take a soft and clean piece of cloth (a clean towel is a good option) and soak it in warm water for a while. Squeeze out as much water as possible and you get your warm compress. You can also microwave a small towel in a bowl of water. After you warm compress is ready, lie down and place it under your nose and place another one on your forehead. The warmth will provide you comfort and it will also fight against any inflammation. It will also slowly drain out the mucus and you do not have to worry about constantly wiping at your runny nose because there is already a cloth soaking up all the mucus.

Rinse with saline solution
Saline solution is very effective to treat a blocked nose – especially when your nose is blocked but dry or when the blocked nose is a result of an allergy. You could buy a saline spray at a drugstore or make it yourself. A saline solution is simply salt water. For this, simply add about 0.5 g of common salt to approximately 240 ml of boiling water and you get the saline solution you require to treat your blocked nose. You can improvise on those measurements according to your need but make sure not to put too much salt and it can cause a stinging sensation. The saline solution wets the dry sinuses and also rids you of any nose inflammation. You can fill up a sterile spray bottle with the solution and spray it on your nose or collect it in a sterile dropper and put a few drops over your nostrils every time you feel it getting clogged up.

Stay hydrated
This one is a no-brainer. Drinking water is not just essential for good health but when you have a blocked nose it’s even more necessary. Having a dry but blocked nose is worse than having a wet or runny and blocked nose. So if you have a dry and blocked nose make sure you drink a lot of fluids, especially water. This pushes out the mucus blocking your nose in form of fluids. It also clears out your nasal passage and decreases the pressure in your sinuses – which in turn lets you breath more easily. Reduced pressure in the sinuses also means less irritation and inflammation.

Use decongestants
The main reason your nose gets blocked and feels stuffy when you get sick is because your airways are blocked by the swelling of the blood vessels in your nose. Using a decongestant relieves you from this problem. Use of decongestants soothes the blood vessel that eventually decreases the swelling and reduces stuffiness. Decongestants are available at all drugstores across town in the form of pills or nasal sprays. But keep in mind that nasal sprays work faster than pills do. Be cautious while using it though because many people suffer from a series of side effects while using decongestants. Some common side effects include headache, dry mouth, increased heart rate, among others. If you suffer from any side effects, stop using the decongestant and consult a doctor immediately.

Take allergy medication
Most of the times, the main cause for a blocked nose is due to cold but, at times, your nose might get blocked because of an allergic reaction as well. Taking an antihistamine or an allergy medicine will open up your nasal passages. Both these medications will help in decreasing the swelling of blood vessels in your nose, unclogging your nose in the process. Antihistamines can also clear congestion even when the cause of a stuffy nose is not an allergy. But antihistamines have side effects that are very similar to those of decongestants, so consult a doctor before taking one and stop using it if you experience any side effects.