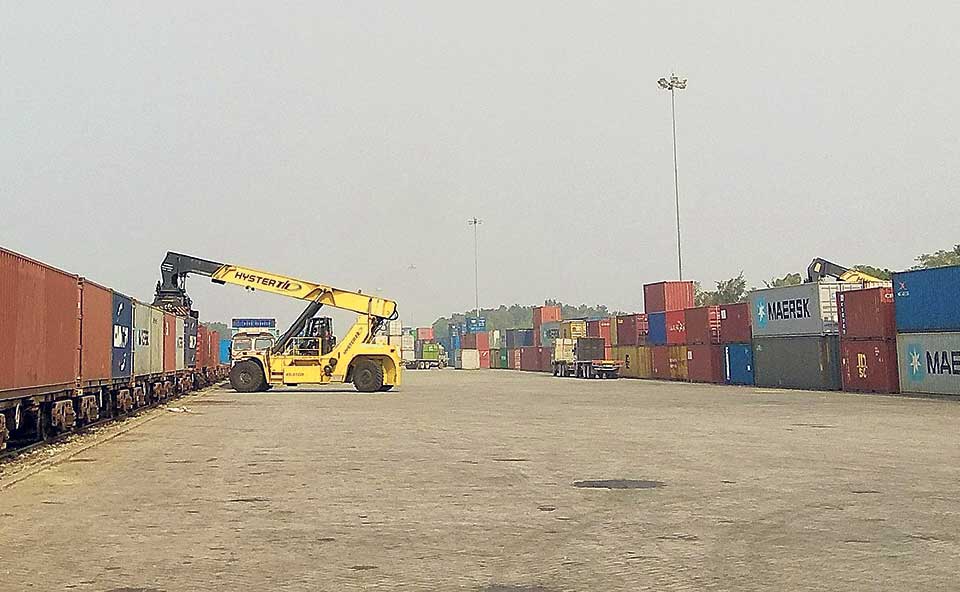 Containers are seen at the Sirsiya-based dry port in Birgunj in this photo taken on Thursday.Photo: Ritesh Tripathi

BIRGUNJ, Dec 16: Traders in Birgunj fear congestion at India’s Kolkata port again as there has been a delay in returning containers. Over a 1,000 containers are still waiting at Birgunj dry port and traders importing via third country say that this delay is likely to repeat congestion at the Kolkata port which had seen congestion for about three months from August to October.

Six hundred thirty containers, which are already empty but have not yet returned, are at the Sirsiya dry port while other 378 containers are in a queue to empty their loads at Sirsiya.

Yet another 600 containers of railway cargo are on the way to dry port of Kolkota, and Himalayan Terminals have to refill the containers and dispatch them to Birgunj again.

“The container transportation is a two-way service, but they need to be filled before sending back to Birgunj,” said Bishnu Kanta Chaudhari, CEO of Himalayan Terminal. “We are facing problem as importers of Nepal have not returned containers on time. Disruption in the running of container service leads to a congestion.”

Chaudhari added that empty container cargos were returned to ease the congestion in last three months. “The containers have to be returned promptly once consignments are off-loaded at Sirsiya,” added Chaudhari.

Delay in returning containers becomes costlier for the traders as they have to pay fines on the imported products. Containers returned after 21 days incur huge demurrage charges, which vary from US$ 60 to US$ 80 per day of delay after three weeks.

The demurrage charges traders paid during the three months congestion was at least Rs 1.20 billion or US$ 12 million as over 10,000 containers were stuck at the Kolkata port for more than 15 days, according to a calculation. Indian authorities had doubled the rails to 12 that carry containers to ease the disruption.

BIRGUNJ, May 14: India's Kolkata port is building infrastructures to improve its service quality much to the delight of Nepali exporters... Read More...

BIRGUNJ, Nov 5: Nepal has been losing a huge sum of money in delay fees for import of goods due... Read More...

BIRGUNJ, March 9: It has been revealed that container handling agents (CHAs), who represent Nepali importers at Kolkata port, are involved... Read More...