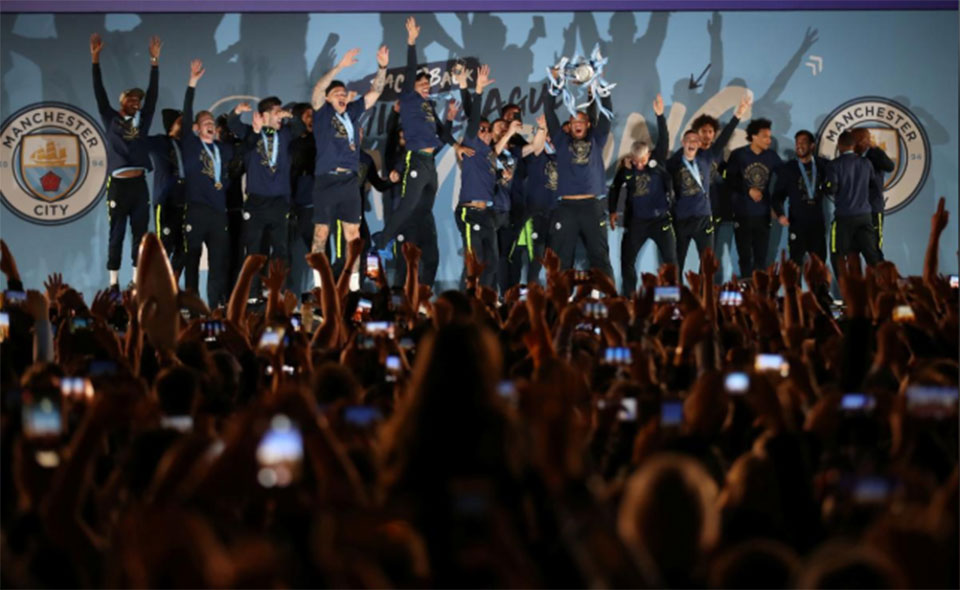 LIVERPOOL, May 13: Manchester City retained their Premier League crown on Sunday, pipping Liverpool to the title by a single point, but while the remarkable numbers of this campaign tell their own story this season was about much more than just consistent point accumulation.

Pep Guardiola’s City and Juergen Klopp’s Liverpool achieved their results playing brands of entertaining, attacking and positive football that have set a new standard in the English — and indeed European — game.

Their combined 195 points were a top-flight record for the champions and runners-up; indeed, they broke the old mark with two games to spare. The 62 wins they amassed together was also a record for a top two.

And not even the intense pressure and nerves of a neck-and-neck title race could push them towards error.

City won their last 14 matches, a streak stretching back to January, while Liverpool ended with nine straight wins - with their solitary defeat of the season coming at City over four months ago.

But while there were some key wins, in the closing stages particularly, won by narrow margins, the pair combined for 184 goals, an average of 2.4 goals per game.

Klopp and Guardiola have avoided barbs or mind-games throughout the season and have barely needed prompting to praise each other’s teams.

HUGE PLAUDITS
The sense that both teams deserve huge plaudits for their football this season has also been clear from the views of expert observers, such as former Liverpool midfielder Graeme Souness.

“City are a fantastic team. They play the game the right way, with strength and depth in their squad. Special teams retain the title,” said the Scot, now an analyst with Sky Sports.

What is fascinating is that those year-long debates over numerical formations - whether it be 4-4-2, five at the back, diamonds, Christmas trees and ‘false nines’ - have been noticeably absent this season.

The reason for that is that neither City nor Liverpool play with strictly formatted systems.

Liverpool nominally play four at the back but their full-backs Trent Alexander-Arnold and Andy Robertson are essential parts of their attacking threat.

The 20-year-old Alexander-Arnold’s 12th and 13th assists of the season on Sunday gave him a new record for a defender in the Premier League era. Robertson wasn’t far behind, having created 11 goals this season.

City’s frontline could be described as a trio - with Sergio Aguero flanked by two wingers, usually Raheem Sterling with one of Leroy Sane, Bernardo Silva or Riyad Mahrez on the opposite flank.

But Bernardo Silva at times also played as a midfield general, alongside or instead of David Silva, and at full-strength City’s midfield is very much part of their attack, with only Brazilian Fernandinho having a clear defensive role.

Likewise, Liverpool’s Brazilian midfielder Fabinho has also been crucial in that anchor, or holding, midfield role, sweeping up trouble in front of the defence and providing a base which gives freedom to the more attacking midfielders.

EVOLVING TACTICS
The evolving tactics of Klopp and Guardiola have other similarities, especially the crucial ability of their attacking players to swiftly seek to recover the ball after losing possession.

There are, though, significantly different elements to the two ways of playing. City rely on lengthy spells of possession to stretch opponents and open up gaps in their defence, whereas Liverpool’s high-intensity attacks can simply sweep opponents away in powerful, forward waves.

But both approaches are hugely entertaining to watch and allow the technical quality of their players to shine — they are above all two teams who enforce their will on their opponents, with styles which depend on self-knowledge and a confidence in their own superiority.

Foreign coaches are nothing new in English football but the Spaniard and the German have done much more than prove they can deal with the challenges of the Premier League — they have transformed the style of football English fans now expect.

The combination of tactical approaches they have established in La Liga, the Bundesliga and the Champions League have been allied with the high-tempo, intensity for which the English game has long been known.

The result is a fusion of football styles which draws on a plurality of European traditions, approaches and tactics but which appeals to the English supporter — and which, above all, delivers results.

LONDON, May 12: Having absorbed everything Liverpool could throw at them in a titanic title battle, Manchester City will retain... Read More...