KATHMANDU, Sept 15: The decision of the Chief Commissioner of the Commission for the Investigation of Abuse of Authority (CIAA), Nabin Kumar Ghimire, to give a clean chit to those involved in the multi-billion rupees scam involving the procurement of land for Nepal Oil Corporation (NOC) despite adequate evidence has brought the anti-graft body under serious public scrutiny.

Constitutional experts including former justices at Supreme Court have accused that the CIAA chief Ghimire, who retired two days ago, had breached the spirit of the constitution by keeping all files related to such a big corruption case on hold. They have alleged that CIAA Chief Ghimire deviated from his true responsibility to spare all big corruption scams under the influence of political and vested interest groups during his tenure as the chief of the anti-graft body. 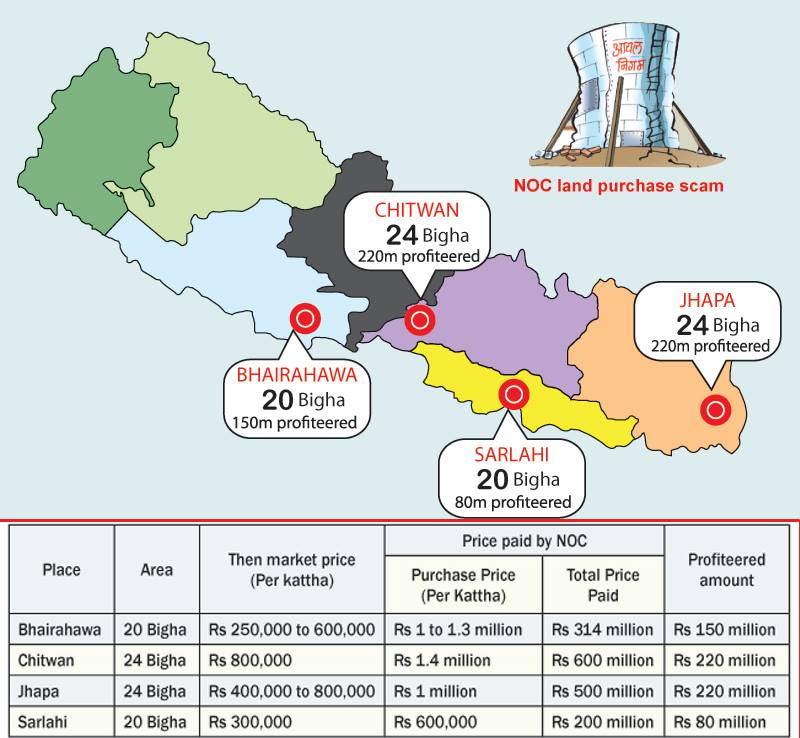 Former justice at Supreme Court, Bala Ram KC said the outgoing CIAA Chief Ghimire had cheated the country, constitution and the people. He argued that legal action should be initiated against such a person if the existing laws allow doing so.

“The former CIAA chief has demonstrated dishonesty to the oath of office and secrecy he took while assuming office,” said former justice KC. “If the existing legal provisions allow to take action against such conduct, a case should be filed against him.” 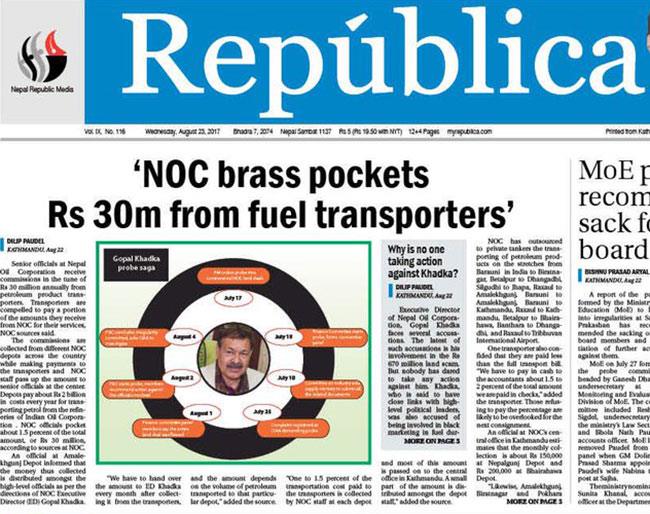 KC also said the decision of Ghimire to put on hold the case involving multi-billion rupees days before his retirement is wrong. “The chief of the anti-graft body failed to fulfill his constitutional duty. He cannot settle such a big corruption case without taking any action just before his retirement,” KC further said. “How can we control corruption if the persons supposed to take action against those involved in corruption seek to fulfill their personal interest?”

Republica and its sister publication Nagarik had carried a series of stories in July 2017 about the misappropriation of Rs 670 million in the purchase of 84 bighas of land for NOC. NOC paid Rs 1.61 billion for the land located in Jhapa, Chitawan, Sarlahi and Bhairahawa as part of its plan to increase its oil storage capacity. 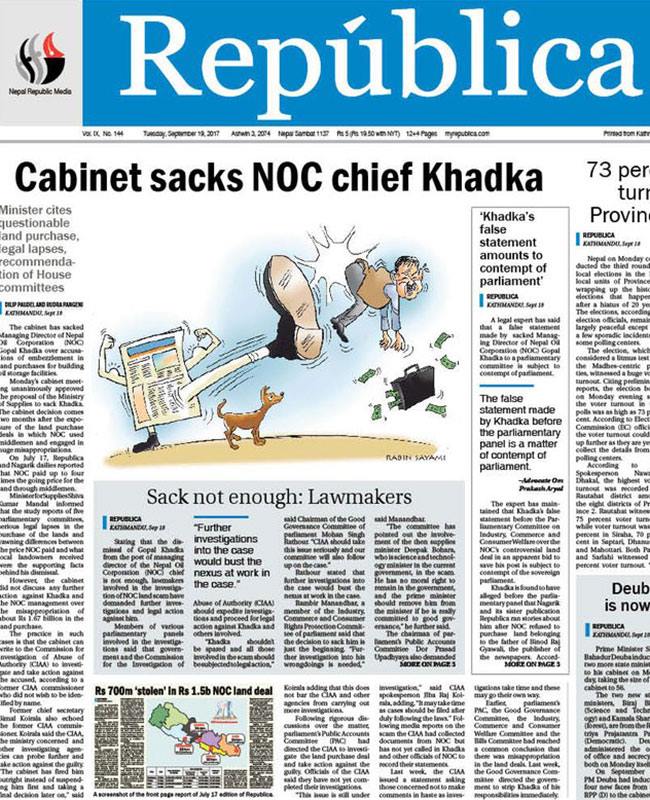 Although there were calls from various quarters including parliamentary committees and other oversight mechanisms, the anti-graft body did not take any action against those involved in the corruption scam allegedly under political pressure. The decision of the outgoing CIAA Chief Ghimire to put the case on hold has raised further questions about the nexus between political leadership, CIAA Chief and those involved in the corruption case.

Former chairman of the Special Court, Gauri Bahadur Karki said anti-graft bodies had failed to fulfill their responsibilities as they tend to be heavily obliged to their political masters. “The CIAA has come under the shadow of the country’s chief executive. It failed to fulfill its constitutional responsibility,” he said. 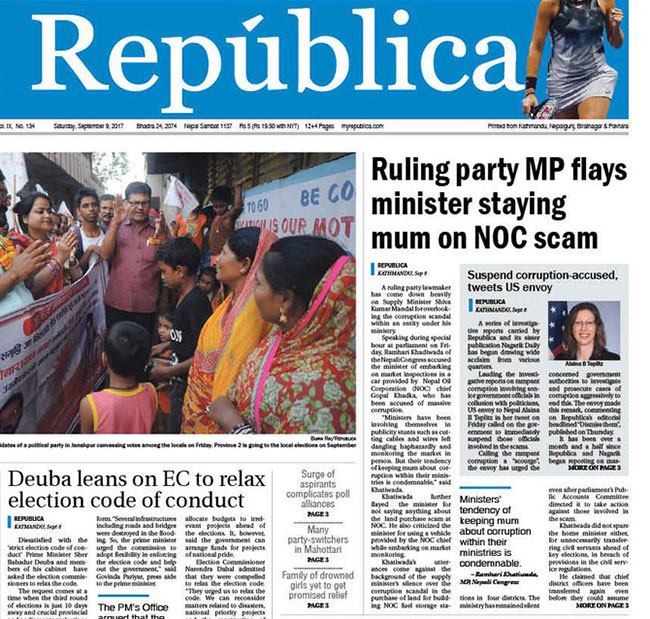 While arguing that the failure of the CIAA to initiate action against big corruption cases had significantly eroded the people’s trust in it, Karki said it is unfortunate to see the anti-graft body not taking any action just because the prime minister said there was no corruption involved. “The mandate of the CIAA is to fulfill its constitutional duties but not to follow the directives of the government,” Karki said.

Experts believe that the system of appointing the commissioners of the anti-graft body on the basis of power sharing deal among political parties had invited this kind of problem in the country. “Political masters give appointments only after asking them to make some commitments. What can we then expect from them?” he asked. 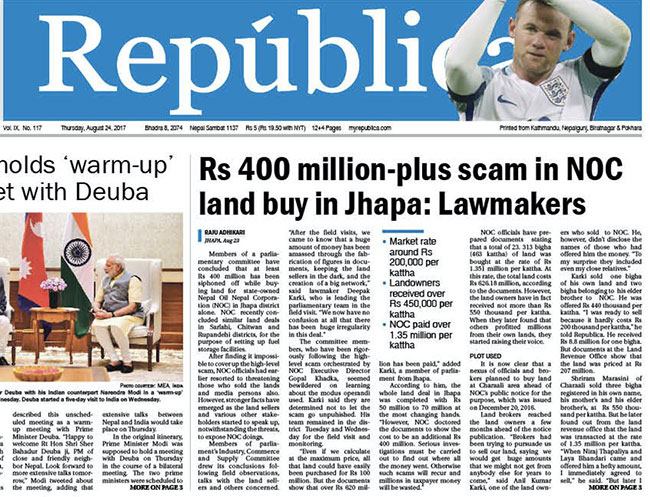 The failure to act on big corruption cases has put the CIAA in the spotlight again. As the government is preparing to appoint chief commissioners and other commissioners of the anti-graft body, a section of people have even demanded that the appointment process be made free and fair and only those without any political allegiances be appointed to such vital posts. 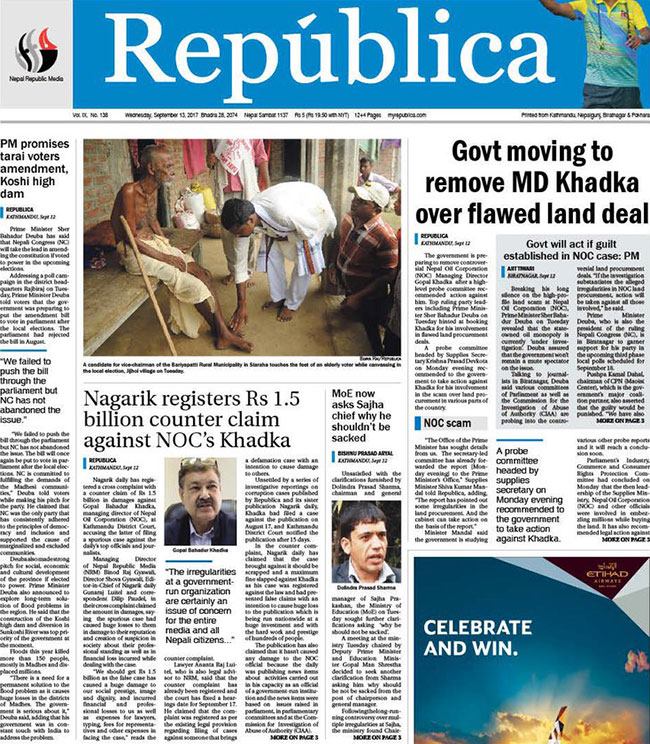 The main opposition party leader Ram Chandra Paudel has demanded investigation into the lack of seriousness demonstrated by the anti-graft body even in such a big corruption case. Issuing a press statement, Paudel even demanded a high-level judicial commission led by a former chief justice to make chief commissioner and other commissioners accountable. “The CIAA did not show any proactive initiatives to probe and punish the guilty even though there are reports of multi-billion rupees corruption scams,” Paudel said.

This is how CIAA conducted KU medical exam

KATHMANDU, July 22: The involvement of Commission for the Investigation of Abuse of Authority (CIAA) in holding Kathmandu University (KU)'s... Read More...