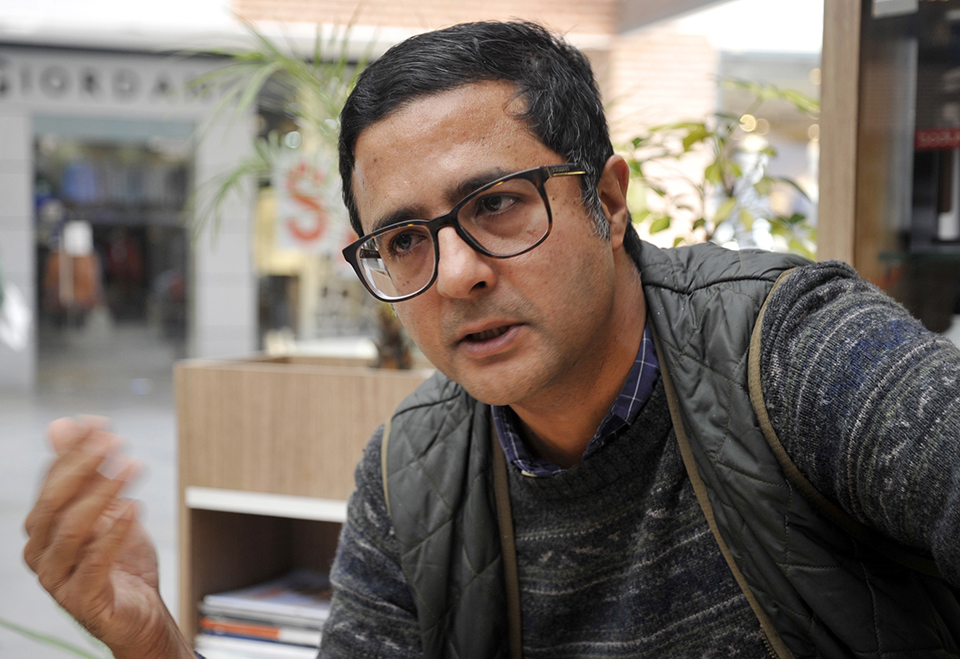 Bhaskar Koirala, the Director of Nepal Institute of International and Strategic Studies (NIIS), has extensively researched Nepal-China relations. He was also among the first proponents of the idea of trilateral cooperation between Nepal, India and China. How does he evaluate Nepal’s relations with China and India at the moment? And how does Nepal benefit from the OBOR project? Mahabir Paudyal caught up with Koirala for his insights.

Every government in Nepal is accused of being close to either India or China. Why can’t we have balanced policies towards both?

Ideally, we should not have been in this situation. We should have been able to stand on our own, independently of either China or India. But this has not been the case. Part of the reason is the long political transition that we have been in after the 2006 changes. We don’t have political stability. There is no stable system to deal with China and India in an appropriate manner. As Nepal is located between two powerful Asian giants, it finds itself pulled in one direction sometimes and in the other direction in other times. Today this has become a normal phenomenon. If Nepal was a strong state, we would not have been discussing this. A weak state like Nepal always finds itself dragged into controversy over whether it is close to India or China or other foreign actors.

In recent times, India seems to have been unnecessarily concerned about Nepal’s relation with China.  How do you explain this?

China’s Tibet Autonomous Region is no more what it used to be some two decades back. Pace of development in Tibet is speeding up at an unprecedented rate. China has greatly expanded its infrastructures in this region in the past 15 or 20 years. May be this has created a ground for India to think that China is getting uncomfortably close to Nepal. India in the past used to consider Nepal’s northern frontier as a natural barrier between India and China.

In the past, not much trade took place between Nepal and China through Tibetan passes because of lack of infrastructures. Today China is developing infrastructures in Tibet rapidly. I was in Hilsa of Humla last year. They have constructed an integrated border security, immigration and customs building. They were making big structures. These must have been completed by now. On the Nepali side of the border there is hardly any such infrastructure. We have a few security personnel and small structures here and there. This is particularly surprising because Hilsa is not connected with any of the major road networks of Nepal. This is one indication of how China takes its relation with Nepal seriously.

India considers Nepal as falling under its traditional sphere of influence. Like I said, they still consider our northern frontier as natural barrier between India and China. In recent times, such barriers are breaking down. Nepal was traditionally seen as a buffer between China and India. This will no longer be the case as Nepal and China are set to enhance connectivity through rail and road networks.  While this may have worried India, Nepal should take it as a call to develop infrastructures within its territory as well. Nepal cannot lie idle while China is developing so fast.

How do you see Prime Minister Sher Bahadur Deuba’s handling relations with China?

People are now talking about the recent government decision to cancel Budhi Gandaki Hydropower Project agreement with China Gezhouba Group. This was not the right decision. You cannot take back a contract awarded to one company because you don’t like that company, or because some would not like to see a company of one particular country building the project. This will have long term impact on our relation with China, especially regarding foreign investment. Gezhouba must have done a lot of ground work to get this project going. It must have already spent a lot of resources. Gezhouba is certainly going to react and it is going to be a negative reaction. Its impact will be felt in Nepal.

As regards Sher Bahadur Deuba’s handling or mishandling our relation with China, we need to put it in a broader perspective. We have been in this transition for a decade. Nepal abolished the 250-year-old order of monarchy and we are transiting into federal democratic republican order. It’s the biggest transition in Nepal’s history. And in the past ten years and more, a coherent, well defined foreign policy has never been our priority. Our leadership is entangled in domestic issues. None of the parties has charted a well-defined foreign policy. There is no uniformity among political parties regarding relations with China and India.

Our leadership is fractured, weak and often there is power vacuum in Nepal. In such situations, bigger countries seek ways to occupy the vacuum. So you have one government that seems to be leaning towards India, followed by another that leans towards China. This kind of situation will continue unless we have clear foreign policy objectives. It seems many proxy battles are taking place here in Nepal.

Could you elaborate on these proxy battles you refer to?

There are political parties and leaders that are inclined to China to advance their interests. And there are others who show greater inclination towards India for the same reason. That’s what I mean by proxy battles. If we look at the situation from this angle, we can understand why certain leaders like K P Oli and Prachanda seem closer to China and others like Sher Bahadur Deuba seem less interested in proximity with China.  Broadly, this is the outcome of lack of policy stability in guiding our foreign relations. But this is not the way we should conduct our foreign relation. This will only raise unnecessary suspicions on China and India regarding Nepal. If we allow this situation to continue it will get progressively harder for Nepal to emerge from this trap.

There are indications that the ‘proxy battle’ will get more intense in the days ahead. Leftist alliance is for greater ties with China while the democratic alliance does not seem as keen on it.

That would be a big mistake. India is a power we must take seriously. India is perhaps the most important diplomatic partner for Nepal. We have around 1,700-km-long open border with India.  And we have so many things in common in terms of culture, religion and matrimonial ties.   Nepali leaders should understand that Nepal won’t be able to alienate India under any circumstances.  Whoever wins this election will have to consider the fact that alienating India to build relationships with other countries will never work. Playing one country against other is a failed idea. At the same time, any effort to spoil relation with China to get close to India will also fail.   These countries are in a position to do a lot for Nepal in terms of infrastructure development.   We need to take both China and India into confidence. But for this, our state has to become strong first.

But this is something that we have been saying for decades, perhaps centuries.
This is what politics is for. This is why we need leadership. Leadership is not only about forming government and running administration for certain years. It is as much about maintaining balanced ties with neighbors.  Yes, it requires a lot of effort to achieve that goal. But I have not seen any leaders sincerely work to achieve this in past few decades. Time has come for Nepal to find a leader who can break this impasse. They need to reflect on why Nepal has failed to maintain balanced ties with India and China. They need to reflect on why India is concerned when Nepal does something with China or for that matter why China becomes concerned when Nepal and India get close.

In your view, how does China look at Nepal at this moment?

Based on my conversations with Chinese scholars I get the sense that they are really worried about frequent government change in Nepal. They are as worried about our policy inconsistency. For example, one government signs a vital deal with China and the other government shelves the deal instead of working to implement it. You award one project to one Chinese company and few months later this contract is declared null and void. The Chinese seem really upset about this.  Many Chinese scholars attribute this to India factor. They are as worried about Nepal’s weak leadership.

Would you attribute this to Nepal’s half-hearted commitment to One Belt One Road initiative?

Partly. But I think we are beginning to see OBOR in absolute terms. OBOR is important for Nepal but this is not everything for us. We have never talked about getting our basics on the trade with China right. We have huge trade deficit with China as well. We are primarily an agriculture-based economy. But we never talk about exporting our agro-goods to China. At the moment, Nepali agricultural products are not allowed into Chinese market. We need to negotiate with China to get preferential access for our agricultural goods. That does not seem to be anyone’s priority. If China opens up its market for Nepal’s agro-products it would have huge impact on our economy. So while we talk about OBOR, why don’t we also talk about this? Besides, we seem to have forgotten Nepal-India-China trilateral cooperation. This idea can be advanced independent of OBOR. This will be the platform for three countries to stand together and work together for mutual benefits.