China raises toll to 20 dead in quake in southwest mountains 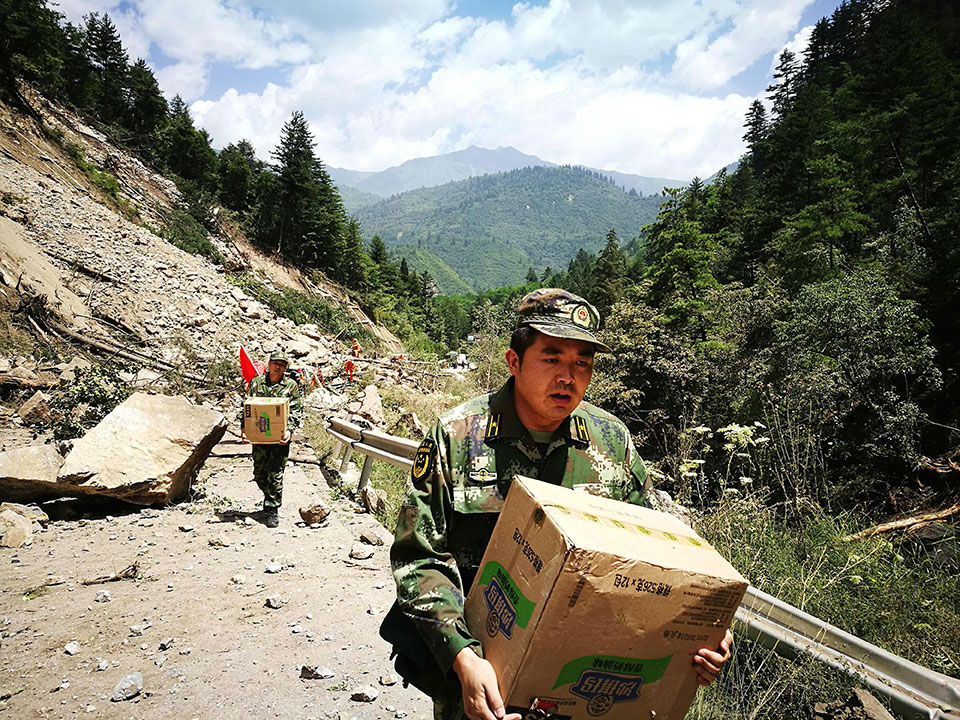 Chinese paramilitary policemen carry boxes of supplies past a section of road blocked by a landslide after an earthquake in Jiuzhaigou county in southwestern China's Sichuan province, Wednesday, Aug. 9, 2017. Stranded tourists and residents struggled Wednesday to clear roads and cope with power cuts caused by a powerful earthquake that killed several people and injured hundreds more. (AP)

The Institute of Remote Sensing and Digital Earth under the Chinese Academy of Sciences drew the conclusion from satellite imagery collected after the magnitude 6.5 quake struck Tuesday night, the official Xinhua News Agency and state broadcaster CCTV said Thursday.

Authorities raised the death toll by one to 20 and injured by around 200 on Thursday. Six tourists and two local residents were known to be among the dead, and 18 people had serious injuries, local authorities said.

More than 60,000 people have been evacuated from the area amid continuing aftershocks, state media said.

A Canadian woman suffered a slight head injury and a French citizen was wounded in both legs and needed surgery to remove stone fragments, according to Xinhua.

Most of the deaths and injuries were recorded in Zhangzha township, near Jiuzhaigou national park in Sichuan province that is listed by UNESCO as a world heritage site.

The quake knocked out electricity and sent boulders tumbling down steep mountainsides onto blocked roads, while Xinhua said its photographers on the scene reported extensive damage to scenic sites which include lakes, spectacular waterfalls and karst formations.

The speed of the rescue effort appeared due in part to improvements to emergency response preparations enacted after the Aba Tibetan and Qiang Autonomous Prefecture that includes Jiuzhaigou was struck by a massive 2008 earthquake that killed nearly 90,000 people.

The U.S. Geological Survey measured the quake at magnitude 6.5 and said it struck at a depth of just 9 kilometers (5.5 miles). Shallow earthquakes tend to cause more damage than deeper ones.

On Wednesday morning, another strong earthquake struck far northwestern China, some 2,200 kilometers (1,360 miles) from Jiuzhaigou, injuring 32 people, two of them seriously, and damaging more than 1,000 houses. That quake was measured at 6.3 by the USGS and struck in a sparsely populated area of the Xinjiang region near the Kazakhstan border.

CCTV said 10,500 people had been moved from damaged buildings to emergency shelters.

Experts' conclusion: Air accidents increased due to lack of full compliance with ICAO standards
23 minutes ago