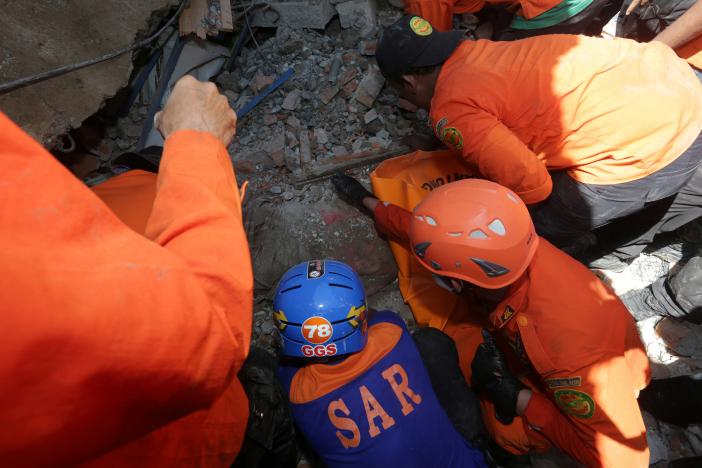 PIDIE JAYA, INDONESIA, Dec 8: Indonesian medical teams struggled on Thursday to treat scores of people injured in a 6.5 magnitude earthquake a day after more than 100 people were killed in the worst disaster to hit the province since the 2004 Indian Ocean tsunami.

The quake toppled hundreds of buildings and left thousands of people homeless. The province of Aceh, on the northern tip of Sumatra island, has declared a two-week state of emergency.

"All the victims were crushed in collapsed buildings,"said Sutopo Nugroho, a spokesman for the national disaster management agency.

Rescuers in Aceh's Pidie Jaya regency focused their search on a market complex, which suffered more damage than other parts of the town of 140,000.

The quake flattened most of the Pasar Meureudu market building, which housed dozens of shops, and rescue teams used excavators and their bare hands to pull out 23 bodies.

Victims included a bridegroom and guests due to attend a wedding party when half the complex collapsed.

"It is so sad for our family, we had prepared everything," said Rajiati, the mother of the bride. Both she and her daughter survived.

Nugroho said many buildings in the area withstood the quake but those that collapsed were probably not built in accordance with regulations.

"Initial information shows that single storey houses without reinforced internal brick or masonry walls have been damaged severely or collapsed," said Behzad Fatahi, a geological expert at the University of Technology in Sydney.

Indonesia's disaster agency said 102 people had been killed, with more than 700 injured.

Television images showed some patients being treated in tents in car parks because hospitals were full. But rescue officials said aid and heavy machinery was arriving.

"Many patients are being treated in disaster tents and we're starting to get doctors coming in from other areas so that is a help," Arifin Hadi, PMI's head of disaster management, said by telephone.

Indonesia sits on the so-called Pacific ring of fire and more than half of its 250 million people live in quake-prone areas, according to the disaster agency.

China raises toll to 20 dead in quake in southwest mountains