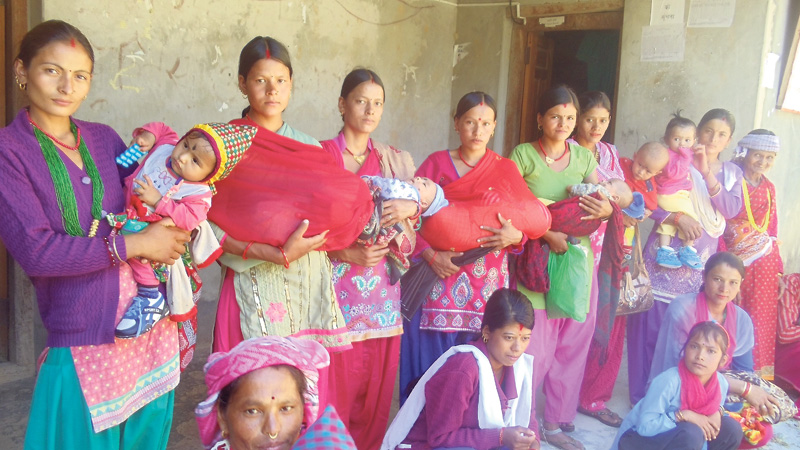 Some young mothers stand in queues at the Matela Health Post for vaccinating their babies in this recent photo. Photo: Jagat Khadka/Republica

In remote areas, belief that girls should be married off before they menstruate, is deeply rooted in the social psyche.
–Leela Ghale, Chief of DWCO, Bajhang

BAJHANG, Feb 11: Kalpana Dhami of Dahabagar VDC - 3 was mischievous and playful as a child. Few girls in her locality would want to go to school, but she was among those who had a strong urge for going to schools with the boys. Her dream was never fulfilled.

She was given the responsibility to take care of her younger siblings till she was eight and when she grew up she was assigned the role of grazing cattle. And when she turned she turned 12, her parents decided to marry her off. “I told my mother that I wanted to go to school like the boys. But she never took it seriously.”

“Instead when I 12, I was married off. They told me that I was grown up and I need to go to somebody else’s house,” Dhami, now 16 and a mother of two children said. “My first child was born when I was 14 and another followed two years later.”

School was not far from her parent’s home. They were neither so poor that they could not afford her education. But Dhami was never able to get her foot inside the school because of the traditional mindset of her parents. They believed that daughters must be married off before they menstruate and therefore before she entered her teen years she was married off, Dhami shares now while trying to make sense of her parent’s decision.

Her parents, however, are not the only who harbor such beliefs. Majority of the parents in rural communities of the district take these notions seriously. Because of this, early marriage and early motherhood are rampant in those areas. For Dhami it is normal to have one or more children at her age.

At such a tender age, she struggles day and night to take care of the children and work in farms, tend to the cattle and even do all the domestic chores expected of a daughter in law. “My husband is a migrant worker. He visits home occasionally. Though I have a step mother-in-law at home, I have to work from dawn to dusk and perform all duties that I am supposed to do as a mother, as a daughter-in-law and as a farmer,” she narrated.

Like other mountainous districts, northern part of the district is home to steep mountains. Dhami says that she has tripped off the hills several times so far while grazing cattle. And on top of that since becoming mother, she has to carry her infant on her back. “I have to carry my baby on my back while grazing cattle. Movement along the mountain slopes with the baby on my back is very difficult.”

Kitti Bohora of Sainpasela VDC - 7, also shares Dhami’s woes. Just 23 but she is already a mother of four children. She too was married at 12 and had her first baby at the age of 14. “I live alone with my four children. As my husband works in India, I am the one who has to look after our children and do all the chores,” Bohora said adding that the life has been very difficult at times.

Sharing her woes, Bohora said that her first three children were born in a two-year gap. She now feels weak and fragile and says that she had felt very weak after giving birth to her third child. “During pregnancy I had to work all day and barely had good food to eat. I feel that because of the hardships and lack of good food during the pregnancies, my body became weak,” she said. Questioned why did they had the fourth baby even if she was feeling weak, she termed it as their fate.  “‘I never desired to have the fourth baby but it was in our destiny.”

Putali Dhami of Matela VDC - 7 is an expectant mother. She was forced to drop out of school by her parents from 5th grade. She was of ‘marriageable age’ and had to be married off.  The 14-year-old stated that she is worried about her future. “I should have been going to school at this age. But my parents married me off so early. I don’t know what I will do?” she said while waiting her turn for health checkup at the local health post’s maternity clinic.

Leela Ghale, Chief at the District Women and Children Office (DWCO), said that the scenario of child marriage and teen-age pregnancy across the district is shocking. Parents are so superstitious that they literally look like people of last century, he remarked.

“When I first confronted the situation, I hadn’t thought the practice would be hard to stop. But while working with the locals here, I have realized that the problem is deeply engrained in the culture,” he said. “In towns people are aware of a girl’s health, her needs and rights. But in remote areas, belief that girls should be married off before they menstruate, is deeply rooted in the social psyche.”

Early marriage and motherhood has taken serious toll on women’s health in the district, Bhanubhakta Joshi, a health professional said. Reflecting on his observations, he said that both children and mothers suffer from poor health. “People are gradually becoming aware about these issues, but the awareness is spreading at a very slow pace. And if actions are not taken to expedite the spread, it is going to take years to wipe out such beliefs and practices,” he opined.

KHOTANG, May 27: In order to discourage children from getting married before the eligible age, an awareness program related to child... Read More...

Cases of child marriage on the rise in Rolpa

ROLPA, Jan 31: Of late, Ropa district is seeing an unprecedented rise in the number of child marriages. Although no official... Read More...