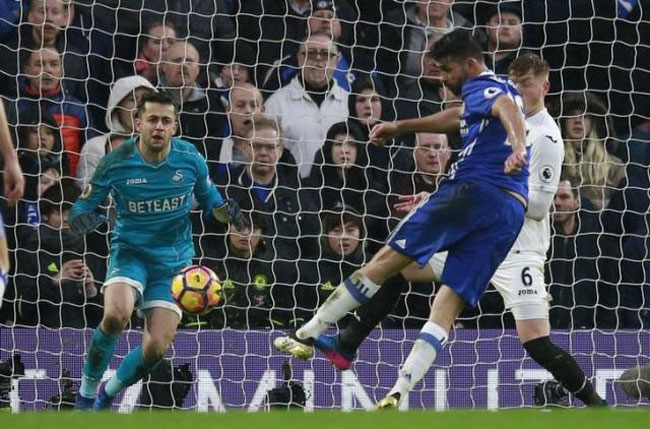 Antonio Conte's side were not firing on all cylinders against a resolute Swansea side managed by their former assistant coach Paul Clement but second-half goals by Pedro and Diego Costa made sure of a 3-1 victory.

They are 11 points ahead of Manchester City who have 13 games left and while Italian Conte is too cagey to start preparing the Prosecco yet, only a monumental loss of form looks like denying him the title in his first season in charge.

Tottenham Hotspur, the only other top-four side in league action this weekend, could trim Chelsea's lead to 10 points if they win at home to Stoke City on Sunday.

"It's important to continue this way. We need 29 points to be sure of winning the league," Conte told reporters.

Chelsea's victory made it mathematically impossible for Leicester to catch them as they are 42 points behind the leaders going into their home clash with Liverpool on Monday - their first fixture since the sacking of manager Claudio Ranieri.

Leicester will start that game third-bottom after Crystal Palace's 1-0 victory over Middlesbrough at Selhurst Park on Saturday took them out of the relegation zone.

Patrick van Aanholt's 34th-minute goal was enough to lift Palace to 17th place with 22 points, one ahead of Leicester and Hull City, who drew 1-1 at home with Burnley.

"The three points are important as it puts us in amongst the pack, out of the bottom three and a bit closer to Bournemouth," Palace manager Sam Allardyce said.

Boro also have 22 points but are sliding towards the drop zone after nine league games without a win.

Bournemouth, too, are being sucked into the relegation battle after a 2-1 defeat at West Bromwich Albion despite taking a fourth-minute lead through Josh King's penalty. Craig Dawson and Gareth McAuley replied for West Brom, who are eighth.

Romelu Lukaku made the points safe for Everton with 10 minutes remaining, taking his tally for the season to 17, level at the top of the scoring charts with Arsenal's Alexis Sanchez. Sunderland's fourth defeat in six left them on 19 points.

"There is a gap between us and the teams above us but there are still 12 games to go," Everton manager Ronald Koeman said."You need to continue and get the momentum."

Watford host West Ham United in the day's late kickoff. Chelsea were made to work hard to dispatch a much-improved Swansea side despite taking a 19th-minute lead when Cesc Fabregas scored on his 300th Premier League appearance.

Fernando Llorente scored from Swansea's first real chance on the cusp of halftime, heading in after Gylfi Sigurdsson found him with a quickly-taken free kick. Swansea were denied a penalty midway through the second half when Cesar Azpilicueta got away with a clear handball.

"That was a big moment. Who knows what would have happened?" Swansea boss Paul Clement, returning to the club where he was assistant coach, said as he reflected on the defeat.

Shortly afterwards Pedro's shot squirmed past keeper Lukasz Fabianski before Diego Costa, the fourth Spaniard of the day to hit the target, made the points safe with a volley for his 16th league goal of the season.

Premier League leaders Chelsea moved 10 points clear at the top on Sunday despite being held by Burnley in an... Read More...