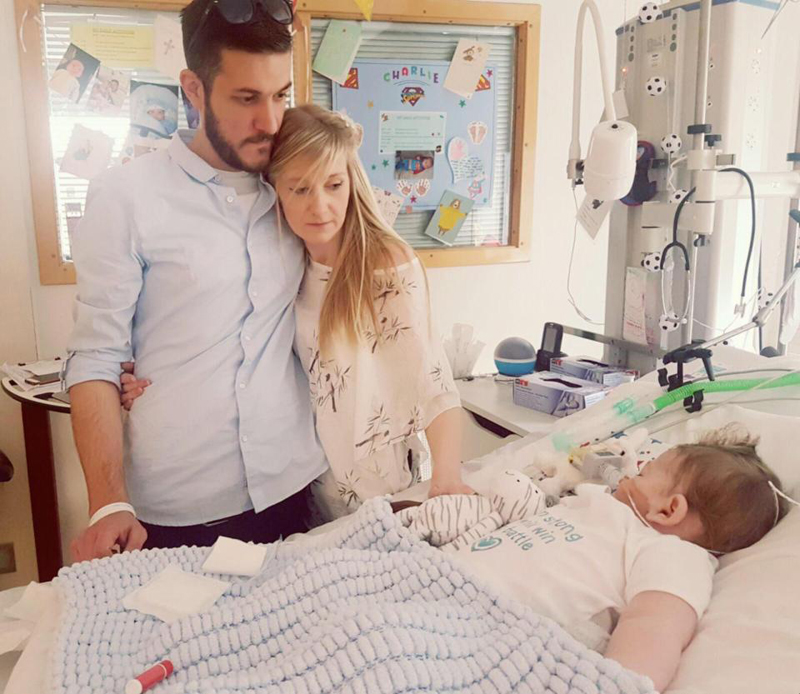 LONDON, July 29: Charlie Gard, a British baby who became the subject of a bitter dispute between his parents and doctors over whether he should be taken to the United States for experimental treatment, has died, local media said on Friday.

The 11-month-old baby suffered from an extremely rare genetic condition causing progressive brain damage and muscle weakness, and his parents' long struggle to save him drew an international outpouring of sympathy, including from U.S. President Donald Trump and Pope Francis.

"Our beautiful little boy has gone, we are so proud of you Charlie," Connie Yates, the baby's mother, was quoted as saying by the Daily Mail.

Local media said a family spokesman had confirmed the death.

"Everyone at Great Ormond Street Hospital sends their heartfelt condolences to Charlie’s parents and loved-ones at this very sad time," said a spokeswoman for the hospital where Charlie had been receiving treatment.

Pope Francis said on Twitter: "I entrust little Charlie to the Father and pray for his parents and all those who loved him."

The Vatican-owned Bambino Gesu children's hospital had offered to transfer Charlie to Rome for treatment, which the pope said should be provided "until the end", as his parents wished.

British Prime Minister Theresa May said she was deeply saddened by the news and her thoughts and prayers were with Charlie's parents.

After a harrowing legal battle that prompted a global debate over who has the moral right to decide the fate of a sick child, a judge on Thursday ordered that Charlie be moved to a hospice where the ventilator that kept him alive would be turned off.

Yates and the baby's father Chris Gard had wanted Charlie to undergo a treatment that has never been tried on anyone with his condition before, against the advice of doctors at his London hospital who said it would not benefit him and would prolong his suffering.

Charlie required a ventilator to breathe and was unable to see, hear or swallow.

The case drew comment from Trump, who tweeted on July 3 that "we would be delighted" to help Charlie.

Britain's courts, after hearing a wealth of medical evidence, ruled that it would go against Charlie's best interests to have the experimental nucleoside therapy advocated by a U.S. professor of neurology, Michio Hirano.

The case prompted heated debate on social media and in the press on medical ethics, and staff at the Great Ormond Street Hospital which treated him received abuse and death threats.

U.S. Vice President Mike Pence tweeted that he was saddened to hear of Charlie's death. He has previously referred to the case in the context of the U.S. healthcare debate, saying it offered a warning of the risks of state-funded healthcare.

Heart to Heart with Malvika Subba

I am a 23-year-old-girl. I have been in a relationship with a guy and I have never been so serious... Read More...

I am a 17- year- old girl currently taking a year gap after high school to prepare for MBBS entrance... Read More...