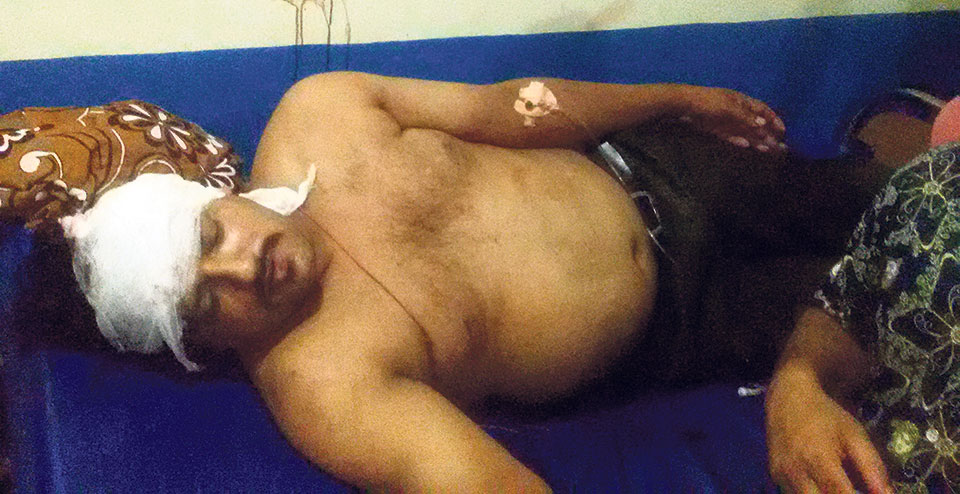 DHANGADHI, July 20: On Thursday evening, Ram Singh and Laxman Serela, cadres of the outlawed Netra Bikram Chand's outfit, entered the Neelam Hotel, an eatery, near Sahidgate in Dhangadhi. They were having tea when two regular customers of the eatery, Jitendra Yadav and neighbor Jaggu Chaudhary, came for tea. Yadav is the chairman of the local Poultry and Fish Farmers Association.

Later Yadav and Chaudhary started talking about a superintendent of police (SP) of the Armed Police Force. Upon hearing the word SP, Singh, who was sitting nearby, stared at Yadav making the latter uncomfortable. Then Yadav gestured to Chaudhary that they leave. As Yadav and Chaudhary stood up to leave, Singh who was carrying a remote-controlled bomb and a pistol in his bag tried to run. That was when he touched the remote controller button and the bomb went off. Singh, who was injured in the blast, died of his injuries on Friday at a local hospital. "Jaggu had already left and when I started moving, I heard a loud explosion," said Yadav, adding, "I collapsed so I don't know what happened later."

It has been learnt the bomb was inside a tiffin box in Singh's bag. The so-called Seti-Mahakali bureau in-charge of the Chand outfit 'Nirman' on Friday claimed that the bomb went off after Singh accidentally touched the remote controller button.

An investigation by police also found that the Singh had mistakenly touched the remote controller button that set off the bomb. Police recovered a remote tester, wires used for detonation, three cell phone SIM cards and a Chinese pistol from Singh's bag, according to Deputy Superintendent (DSP) Dakshya Basnet of the District Police Office (DPO), Dhangadhi.

Singh, 26, was a 'section commander' of the Chand outfit.Singh, who hailed from Pimi of Jayaprithvi Municipality-1 in Bajhang, worked as laborer in Bangalore, India and had returned home during Dashain last year.

Family members said he received combat training from the Chand outfit for three months. "He was section commander of our army," said a politburo member of the outfit, Om Prakash Pun, talking to Republica from an unknown location. Singh is survived by his parents, wife and three children.

Serela is a former Maoist combatant

Laxman Serela and his wife Bimala are both former Maoist combatants. Each of them had received Rs 500,000 after retiring from the Maoist People's Liberation Army. They were in India and had returned to Nepal just two months ago.

CPN claims responsibility for the blast

Meanwhile, the outlawed CPN in a statement on Friday admitted that deceased Ram Singh was its cadre and died "when the bomb he was carrying for self-defense went off."

KHOTANG, July 9: An inmate was found hanging in the toilet of District Prison, Khotang on Sunday evening. ... Read More...