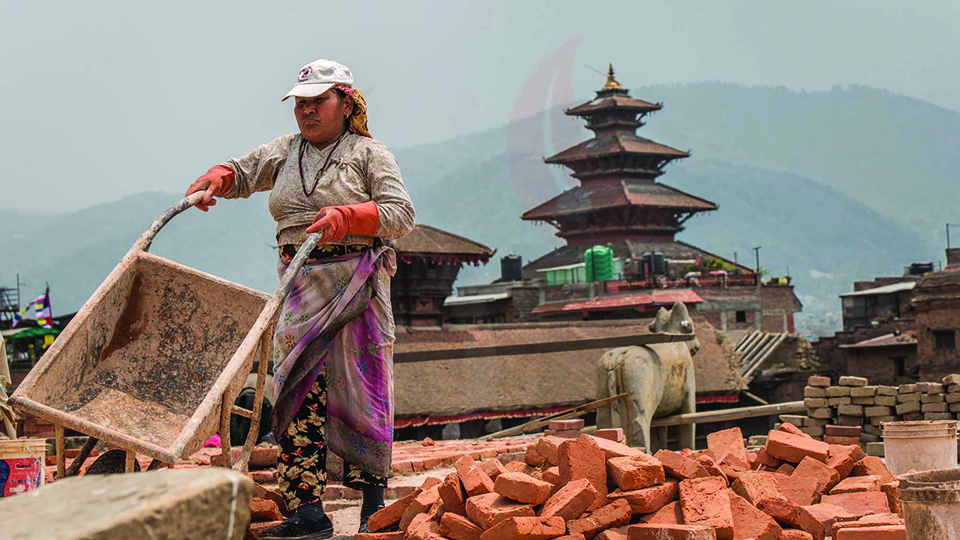 Reconstruction process in Katmandu Valley has been affected mainly due to urban poverty. Poverty incidence in Kathmandu has risen to 11.5 percent

The progress of housing reconstruction in districts inside the Kathmandu Valley has remained slow compared to other districts. Only 28.43 percent beneficiaries here have received third tranche of housing grant in comparison to 82 percent in Rasuwa and 75 percent in Gorkha districts. Why is this happening?

Over concentration of population in Kathmandu Valley is one reason. The Valley consists of about 5.6 million people with 9827 people per square kilometer. The density of urban population in the core city has reached around 22,000 per square kilometer. As the Valley generates more than 23 percent of GDP, it is extremely attractive destination for people across the country. Land price has gone up beyond affordability of the urban poor. The ancestral property of the native people has been fragmented and has gone below the municipal standard threshold of 855.62 square feet. These people cannot secure building permit from the Municipality which means they cannot take forward reconstruction process.

Right of Way (RoW) is another issue. In the urban areas other than the heritage settlements, the minimum road width is defined as 10 meters which is sensible for the two-lane road. However, a majority of the existing urban roads have only three to four meters width just sufficient for a single vehicle. Additional six meters have to be acquired from both sides. It means the original building line has to be pushed back further which leaves extremely narrow fringe or no land for house construction.

In the heritage sites, the beneficiaries need to maintain traditional architecture and building height is also regulated. Such structures are costlier and architecture does not suit people’s desire either. Such beneficiaries either don’t construct their houses or construct by violating the norms set by Municipality and NRA, which renders them ineligible for housing grants.

The construction cost of urban housing is higher than in rural areas. Traditionally people in the valley use ground floor for storing various household items, not for living. Before the introduction of water proofing flooring, the ground floors in Kathmandu used to suffer from damp which deterred people from living there. So they made two story houses. The rural people store their household stuffs in cow sheds and in their vicinity which is not the case with the urban people. On the other hand, the ground floor in most of the cases is used for shops and other workshops. The municipal standards are quite stringent in terms of foundation and pillars, raising the costs higher. It also costs substantial amount of money for removing debris of the collapsed houses. Particularly it is difficult in the narrow gullies which are not accessible for trucks. All these factors make urban housing much costlier.

The reconstruction has also been affected due to urban poverty. Urban poverty is increasing further while rural poverty is declining in Nepal. Poverty incidence in the Kathmandu valley is 11.5 percent in comparison to 8.7 percent in hilly urban areas and 22 percent in Tarai urban settlements. Due to the high land and house construction cost, the informal settlements are on the rise. The people of 11.5 percent income bracket have not been constructing their houses. They have been encountering all the problems stated above. Moreover, they normally survive with employment in the informal sector—street vending, daily wage earning etc—which are not recognized as income by the formal banking sector. They neither have savings nor access to finance.

The municipal governance is also a problem. The preparation of house drawing costs around minimum 50,000 rupees in the private market and approval process takes around five to six months. Some beneficiaries also complain about kickbacks for expediting the approval process. For ameliorating the situation, National Reconstruction Authority (NRA) took the issue up with the Municipalities and has developed understanding that they need to approve house drawing within 15 days. But the situation has not changed much.

The problems stated above are rather structural which is why it is difficult for NRA to solve them.  All these problems will require local, sectoral and integrated national intervention. Short, medium and long term measures will be required. In the short term, how to enable beneficiaries to construct their shelter within the constraints of land inadequacy and scarcity of funds is the central question.

In the quest of resolving similar problem, a public housing project was launched in St Louise, Missouri in early 1950s. The project constructed 33 housing blocks, each 11 story high, in 57 acre site. However, the project was demolished because it became a fertile ground for crime. Therefore the fundamental issue is how do we as a society perceive poverty and how to break the poverty’s vicious cycle in a sustainable way.

Our assumption that the federal structure will ensure power devolution to the local level hence the municipalities will do most of the jobs is not holding true. With demise of district headquarters, and inadequate threshold population in rural and urban centers to sustain intermediate infrastructure and concentration of economic engine in the Kathmandu valley, rural urban migration to Kathmandu Valley continues unabated.

Under the present circumstance, we need to accommodate urban poor in their own neighborhood with the policy of land saving and high-density vertical development with adequate communal amenities at the ground level. We need to create employment opportunities in their vicinity or promote entrepreneurial spirit such as home stay for the tourists. As most of the core areas in the Kathmandu valley are very close to tourism center, the housing policy will need to promote tourism in various forms such as home stay, souvenir shops or production of souvenir products. For this the local governments will need to create environment for house pooling and design the settlement with the elements of traditional architecture and requirement of the people.

If NRA continues with current formal provisions, it might not be able to expedite housing reconstruction. But if housing reconstruction is combined with urban renewal strategy with adequate technical assistance and financial resources, it will be able to promote healthy economic growth desirable from all angles. This requires alternative and comprehensive strategic package for Kathmandu.

The urban housing reconstruction is seriously affected by fundamental causes such as unavailability of land, poverty, and municipal standards. It is difficult to achieve desirable progress with the status quo approach.  If NRA in collaboration with the local governments and federal government chalk out creative strategy for housing reconstruction with creation of employment opportunities and promoting entrepreneurial drive, the reconstruction will be catalytic agent for establishing productive society.

Local governments should take initiative for implementing building codes and by-laws. They should also monitor compliance of those laws ... Read More...