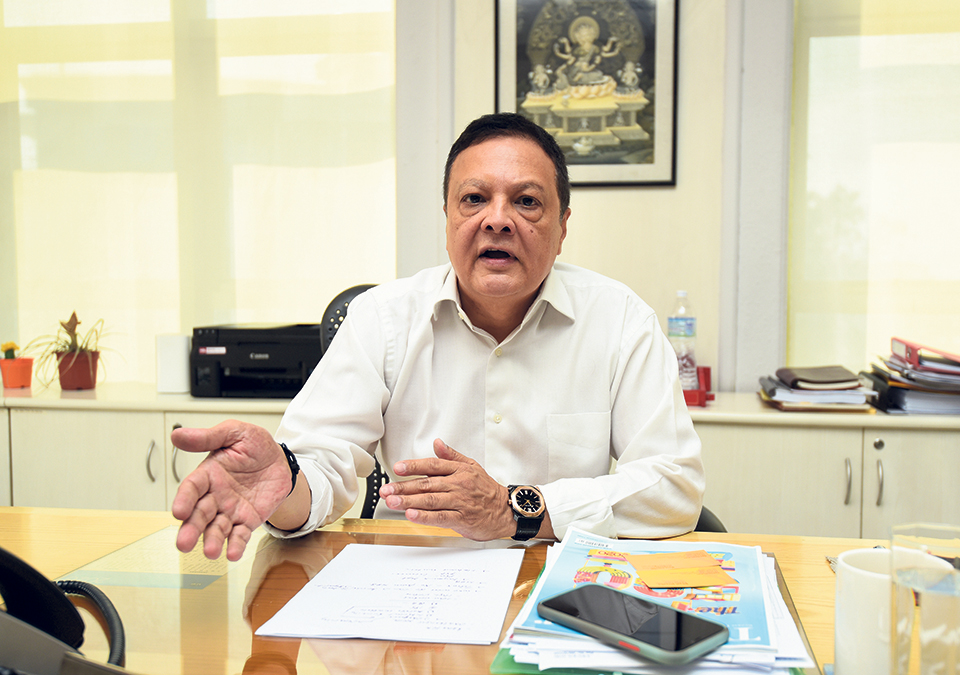 Ashoke SJB Rana is the CEO of Himalayan Bank Ltd, with almost three decades of banking experience. Republica caught up with Rana to talk about advantages and disadvantages of cashless economy, among other issues. Excerpts:

Given the existing larger rural and informal economies that are still deprived of financial access, is it possible to go completely cashless? How do you overcome such challenges?
It is not possible to go completely cashless at the moment. There are two types of cashless; when we first began it was cheques and the other is internet banking. Four years ago, NRB realized that cashless and payment were big concerns especially for illegal forms of transactions. That's when they setup payments department with the purpose of handling payments. The banks now need to acquire two licenses to operate: payment service operator and payment service provider from the central bank. They are looking at two issues, one, low value- mobile wallets, QR codes and fintech and other is the high value where corporations can pay the government taxes, customs, interbank service.

The acceptance of the cashless system needs to emerge from urban areas and later trickle to the rural areas as there are no infrastructures in rural areas. We still need cash out points. Clearly what central bank needs to do now is set standards. Right now they have one for mobile wallets, and there are five-six providers. The central bank has set limits for security concerns.

The challenge now is technology driven. The issue right now is interoperability, whoever has mobile interface can make payments. If the banks are in the interbank payment system (IPS), they can make interbank payments. The central bank is looking at establishing a national switch, which means the banks can be interoperable. We are hoping that there will be non-restrictive payments after the establishment of the switch.

What can be the possible advantages and disadvantages on making the financial system cashless?
The benefit of a cashless society is that we can track payments and people cannot take undue advantage of tax avoidance. I don't see huge disadvantages on cashless. We have almost 8 million debit card base of which only 11% is used for PoS transaction, rest of the cards are used for ATM transaction. This shows how cash centric Nepal is. They do have the ability to make transactions through debit cards but they prefer making payments through cash. Some banks are at fault for selling debit cards as ATM cards. The service providers, even if we ask for card payment, are very reluctant because of the tax issue. The reason why the card payment and mobile wallets are not taken up is because the merchants need to sign up and it will bring them to the tax net. They show reluctance to signing up to the government for they need PAN number. The government needs to make them aware that if they are not registered with the government, they cannot do business. To accept the mobile payment, you need to be registered because of which there is lots of reluctance from the merchant's side.

What are the initiatives taken by your banks to implement the norms of cashless economy?
In terms of card business, we are the largest acquirer, having the biggest PoS network somewhere around 3,000 to 4,000. We are trying to expand further. PoS machines are costly and need internet connection. Connectivity is an issue and getting people to actually accept it is another issue for us. We have a system through which our corporate clients can make payments to their vendors, staff and other things where there is no limit.

The country like us often faces the threat of hacking of technology as also seen few months ago in ATMs. In this context, what can be done to check such possible threats?
The payment service providers need to follow some security protocol like the cards have to be payment card industry digital security standard (PCIDSS), an audit they have to go through. They have to go through two to three certifications before they roll out their products. If the central bank is vigilant and makes sure that these things happen, then the chances of fraud will be less.

In what way does the Nepal Rastra Bank policy support in this regard? Or what are the shortfalls in the central bank's policy?
The NRB is very at the top of this as they have set payments department set up four years ago. They do come up with audit and monitor the banks. From time to time they come up with stricter standards.

The bank has been vigilant and is following up. The central bank has not allowed telecom companies to come in and have allowed only fintech companies and banks which is a different practice from other countries.

302 stranded US tourists fly out of Nepal
19 hours ago

Opinion: What will the world be like after coronavirus? Four possible futures
8 hours ago
India returnees who reportedly participated in Delhi Markaz  quarantined
10 hours ago