Cases of dengue and scrub typhus surge in Gandaki Province

In the past five months, Mygadi district alone recorded 64 cases of dengue fever and 43 of scrub typhus

MYGDI, Sept 17: Gandaki Province is battling not only the novel coronavirus disease (COVID-19) but also the outbreaks of dengue fever and scrub typhus in recent days.

Of the 11 districts in the province, Mygadi has the highest number of 64 cases of dengue fever and 43 of scrub typhus followed by Kaski with 20, Lamgunj with 10, Syangja with four, Nawalparasi with three, Baglung with two and Parbat and Gorkha with at least one cases each.

So far, only three districts in the province — Mustang, Tanahu and Manang - have reported being dengue-free districts.

According to the coordinator at the Beni Hospital, Dr Nawaraj Bastakoti, Gandaki Province is witnessing more than nine cases of dengue fever and scrub typhus daily on an average. “These viral diseases have been diagnosed in people without any travel history in the remote villages as well,” he added.

According to the latest data from the Epidemiology and Disease Control Division, Mygadi is one of the five districts that witness most numbers of dengue cases in Nepal.

Dengue fever is a mosquito-borne tropical disease caused by the dengue virus. Symptoms typically begin three to fourteen days after infection. These may include high fever, headache, vomiting, muscle and joint pain, and a characteristic skin rash. Likewise, scrub typhus, also known as bush typhus, is a disease caused by a bacteria called Orientia tsutsugamushi. Scrub typhus is spread to people through the bites of infected chiggers (larval mites). The most common symptoms of scrub typhus include fever, headache, body aches, and sometimes rashes. 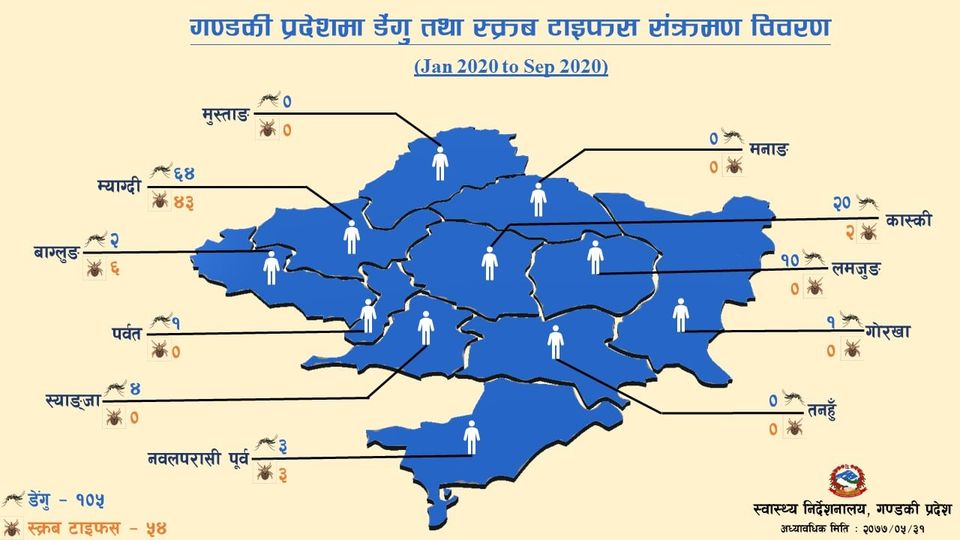 IN PICS: Landslides in Gandaki Province

KATHMANDU, July 11: As many as 30 people have died in Landslides triggered by incessant rain in Kaski, Lamjung and... Read More...

POKHARA, Dec 14: Efforts have been initiated to revive the Millennium Trekking Route when the trend of trekking routes shortening... Read More...