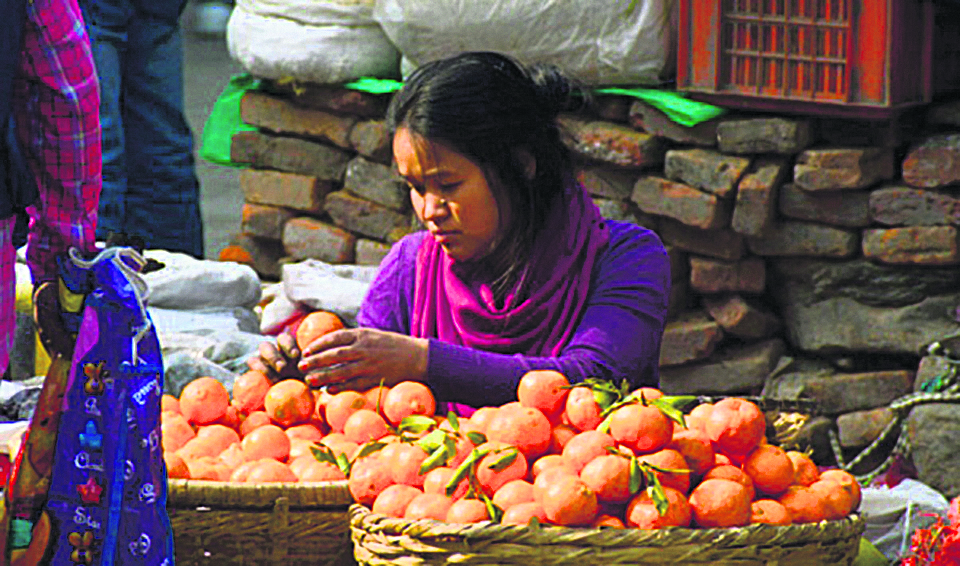 Citrus is one of the most important fruit crops of Nepal in terms of area coverage, production and export potential. It is grown in more than 54 districts out of the total 77 districts. All the 40 districts of the mid-hill region and three Tarai districts are producing citrus fruits in considerable amounts. Citrus fruits in the mid-hill region have now become business proposition and 339 pockets of citrus in 51 districts have already been developed. So the answer to the question ‘can Nepal export citrus fruits to China?’ is yes. But Nepal needs extra impetus in productivity increase which is at decreasing trend. For example, productivity of citrus fruits has decreased from 10.75 ton/ha in 2004-2005 to 8.82 ton/ha in 2014-2015.

Citrus fruits having commercial potential in Nepal are mandarins (citrus reticulata blanco), sweet orange particularly Junar (citrus sinensis osbeck), lime (citrus aurantifolia swing), lemon (citrus lemon Lin) and hill-lemon (citrus pseudolemon). Of the total fruit area in Nepal, citrus shares nearly 32 percent of the total area among which the contribution of mandarin is nearly 21 percent. Similarly, the share of citrus in total fruit production is 37 percent, in which mandarin is a major commodity. Its share in total production is nearly 25 percent. Needless to say, this indicates that citrus is the major fruit in Nepal that has a significant place in the socio-economic wellbeing of the Nepali farmers.

Nepal has high potentials for export of citrus fruits to the markets of the neighboring countries including China, India and Bangladesh due to high demands for Nepali oranges. In fact, Nepali oranges are the fruits of choice for the people living in the vicinities of these markets. Furthermore, income growth rates and income elasticity of demand in the markets of these countries are also increasing.

Every year Nepali oranges are exported to the border markets of India informally during the harvesting season. Nepal started to export oranges to Bangladesh in the early nineties. But it could not be continued due to low volume of production and other hurdles in trade. Then Nepal started negotiation with China to export oranges to Tibet. In this context, several visits were made by the concerned authorities of both countries to the production areas of Nepal and potential markets of Tibet. Several rounds of bilateral talks were held.

Trade protocol with China
Finally, Nepal and China signed a bilateral trade protocol in 2012. But this protocol demanded not only freedom of pests in the ultimate sink but that the products should be harvested from an officially declared Pest Free Area (PFA) as well. PFA is ‘the area in which a specific pest does not occur as demonstrated by scientific evidence.’ This was a fastidious quarantine requirement of China. So Nepal requested China to revisit the bilateral agreement to relax its requirement. It is obvious that China needs citrus fruits, but it is not possible for Nepal to harvest citrus fruits in a PFA.

However, the integration of different risk management measures in Nepal can cumulatively help achieve the acceptable level of risk (Appropriate Level of Protection) against the quarantine pests of China. As the fruits entering China would not cross the border of Xizang province (written in the first protocol), and also since there is no citrus production site adjacent to this province for several kilometers, the protocol of phytosanitary requirements for Nepal to export citrus fruits to Tibet can be simplified. So it is proposed that the protocol simply includes grower registration, pack house registration and pack house inspection of fruits to ensure pest-free product. The new protocol has been signed recently between the Department of Agriculture of the Government of Nepal and General Administration of Customs of the People’s Republic of China.

However, China imports citrus fruits from other countries as well. Nepali oranges will have to compete with them in terms of quality and prices. Therefore our prime objective should be to produce high quality oranges at competitive prices. Considering the growing conditions, availability of local germplasm and other factors, it is quite possible provided there is strong commitment from the government and other key stakeholders.

Way forward
Though the possibility of area expansion under citrus fruits is limited to few thousands hectares, the possibility of increasing productivity of crops is high due to wide gaps between actual yields and attainable yields. In this context, attainable yield is defined as the yield that can be obtained from the existing varieties with improvement in production techniques and application of plant nutrients.

Yields of citrus fruits can be increased to about 25 tons/ha by simply improving orchard management practices such as timely application of required amounts of manure and fertilizers, disease and pest management, tree pruning, mulching, irrigation, etc.Worldwide, citrus yield ranges from 50 to 90 tons/hectare. India and Pakistan often reach 20-30 t/ha. Nepal has better climatic and soil conditions to grow citrus as compared to other South Asian countries.

Nepal has many opportunities to expand citrus industry commercially and make citrus fruits an exportable commodity.But the Government of Nepal should take initiatives for revisiting the existing programs, available human resource and institutional arrangement.There is a need to promote public-private partnership (PPP) approach to speed-up commercialization process. Formulation and enforcement of Nursery Act to regulate uncontrolled flow of nondescript/non certified planting material across the country by introducing internal quarantine system should get priority. Establishment and management of pathogen-free citrus nursery system in the disease free citrus growing areas should be started as soon as possible.

Production enhancement to meet the requirement should be based on area expansion, productivity increase and post-harvest loss reduction. Area expansion comes from two major aspects, replacement of traditional food crops by citrus fruit crops, and plantation of fruits in escaped lands. Productivity should be increased by improving sapling quality, selecting high yielding varieties and improving orchard management. Declined orchards should be rejuvenated through implementation of special programs in the form of campaign.

Programs on sensitization and orientation of citrus growers on plant health management should get top priority. Instead of providing subsidy, the concept of revolving fund should be introduced to support small farmers. Capacity of local manpower in orchard management should be enhanced through training. Improvement in access to rural credit is necessary and provision should be made to provide soft loan with project based collateral.

Efforts should be made to reduce post-harvest losses through improved post-harvest handling including packaging, transportation and storage. Linking production areas to the markets by improving road access and developing collection centers in the production areas are also very important interventions.

KATHMANDU, Dec 27: Secretary of the Ministry of Agriculture and Livestock Development, Yubak Dhoj GC, on Wednesday said that the country's... Read More...

KATHMANDU, July 30: At a time when the government and the Nepal Rastra Bank (NRB) have been encouraging bank and... Read More...