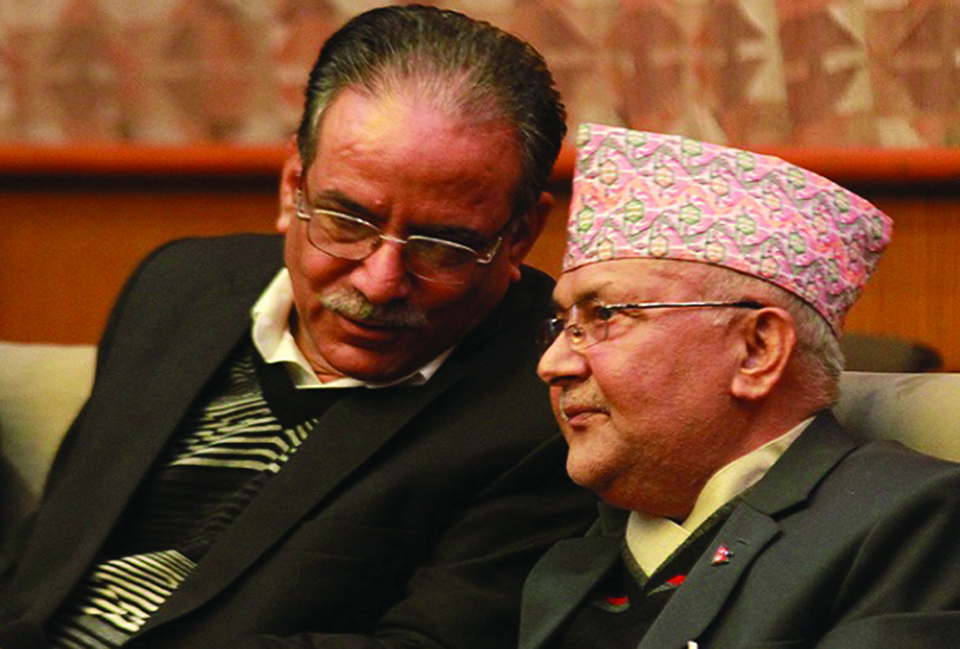 Thira Lal Bhusal has been working as a journalist for over a decade. At present, he is working with Republica national daily and covers parliamentary, federalism and other political affairs. Previously he worked for various other national and international media.
thirbhusal5@gmail.com

None of the majority governments since 1958 has survived full term. Major reasons are intra-party feuds and personal rivalry of leaders. KP Sharma Oli’s two-thirds majority government stands on complex relationship among top five leaders—Oli himself, Pushpa Kamal Dahal, Madhav Nepal, Jhalanath Khanal and Bamdev Gautam. So will his government be any different? Now is the time to ask this question because syndromes of diseases that collapsed previous majority regimes have also infected Oli’s government.

During the election campaign in 2017, CPN-UML leaders trumpeted that the country was in dire need of a clear majority government to end the decades-long instability and to speed up much-needed development. They claimed the communist party was the only force that deserved the opportunity because another major force, Nepali Congress, had repeatedly proved itself incompetent to handle majority government. They claimed Nepali Congress had already failed the country in the late 50s, when people gave it two-thirds majority in the first ever parliamentary elections of 1958 (Congress had won 74 of total 109 seats).

Thus, until 2017, Congress was the only party that got the opportunity to run absolute majority governments. But on all three occasions, Congress failed to serve full term.

In 2017, UML leaders used this story to claim NC was a proven incompetent force. People gave UML-Maoist alliance (which later emerged as unified Nepal Communist Party) nearly two-thirds majority seats in the federal parliament and KP Sharma Oli became the prime minister in February 2018. NCP also formed its governments in six out of the seven provinces, with overwhelming command on 753 local governments across the country.

A year later, none of these governments have performed impressively. Why are they failing to properly govern?

First, NCP leaders concentrated their energy in winning as many seats as possible. They thought little about post-election plan. They did not think about using two-thirds majority support as a means to deliver as per the people’s mandate. While they were accusing NC of failing the country despite gaining overwhelming mandate, they did not care to figure out why NC failed in the first place.

Congress returned to power in 1991. It formed absolute majority governments twice in the 90s but both governments were riddled with factional feuds. Feud between Girija Prasad Koirala, Krishna Prasad Bhattarai and Ganeshman Singh caused fall of the governments in 1993 and in 2000. Later, the rivalry between Koirala and Sher Bahadur Deuba spoiled the situation.

The relationship among top five NCP leaders mentioned in the beginning is complex, to say the least. Co-chairmen Oli and Dahal had most bitter relations in the past. They hated each other the most until two years ago. Publicly, they now claim to be in good terms but Dahal has already made public his dissatisfactions with Oli.

While Oli seems to be giving due importance to Dahal and the latter looks refraining from criticizing the prime minister in the hope of succeeding him in the government as well as the party, both harbor suspicions against each other.

Besides, there is complex unease between Oli and Madhav Nepal. Nepal and Oli were each other’s rival in the party for a long time. Though Nepal doesn’t openly criticize Oli, he doesn’t openly back the government’s decisions either.

The Nepal-Oli rivalry had turned into friendship during Nepal’s premiership (in 2009) as Khanal and Gautam were tacitly siding with Maoists, which launched agitation to topple Nepal-led coalition.
The government of Madhav Nepal, despite a coalition of nearly two-dozens of fringe parties, succeeded to do some important tasks due to full support by Oli and Nepali Congress. But, it was due to non-cooperation by his own party Chairman Khanal and Vice-chairman Gautam that the government couldn’t last long.

But in 2014, Nepal backed Khanal against Oli in the race for parliamentary party leader. Later in the same year, Oli and Nepal fought for the post of party chairman and Oli defeated former party chief Nepal, who had headed UML for 15 years until 2008. Now, as Oli and Dahal jointly head the party, Nepal seems unhappy with Oli for trying to project Dahal as his successor.

In 2010, Nepal and Oli exacted revenge against Khanal for partnering with Maoists against UML government. They threw Khanal out of the race for prime minister in a humiliating way citing that he lacked two-thirds votes to get elected to the post.

Nepal and Oli couldn’t stop Khanal from becoming prime minister. But it took seven months and his government survived less than seven months due to non-cooperation from Oli and Nepal. He wasn’t accepted as prime ministerial candidate by his own party despite that he was the only top UML leader to win the election in 2008 when the party was in serious crisis. Khanal is the leader, who doesn’t express his anger but can wait for an opportune time, no matter how long it may take.

Khanal, who had already become party chief in 1980s and was later demoted by Madan Bhandari to a central committee, emerged as party chairman and prime minister after three decades.
At present, Khanal is unhappy for not making him the country’s President and for being demoted to the fourth position in the NCP hierarchy.

Oli and Gautam were always in opposite camps in the UML. They openly criticized each other. But, when Nepal supported Khanal in the race for parliamentary party leader in 2014, it was only Gautam’s support that helped Oli defeat Khanal. Oli managed to bring Gautam in his fold. For that, Oli promised to introduce the principle of one-person-one-position and separation of powers in the party organization and give Gautam a key role. With Gautam’s support, Oli defeated Khanal to become parliamentary party leader and later defeated Nepal to become party chairman.
As Oli now heads the party and the government, Gautam feels sidelined. He has started to express frustration against Oli publicly.

Challenge to power
Oli is criticized for not implementing the policies he fought to introduce in the party. He is the one who fought to establish collective leadership system, democratize the party’s organization and decentralize powers. He was the one who fought tirelessly to transform UML’s one-man leadership structure into collective one from the center to the grassroots.

In the past, only the General Secretary used to be all powerful like in Chinese Communist Party’s structure. Oli played an important role to break that structure and create posts like chair, vice-chairs, general secretary, deputy general secretaries, secretaries, and other members from central to the local committees with inclusive provisions. Oli played a role to adopt collective leadership system from the general convention held in Janakpur in 2003.

Oli successfully unified two major communist parties into one and created NCP. But his and Dahal’s failure to complete remaining process has left the party disorganized. The UML cadres who used to be busy and active have now become jobless and inactive.

In the past, Oli exerted power and influence in the party even while he was not the party chief. He would be able to get every decision endorsed from central committee and standing committee. But in 2018, neither politburo nor central committee members were informed about merger of two communist parties. They came to know about it only after the decision was made.

Oli and his coterie do not care much about media and civil society. Oli always relied on his core team. He trusted loyal lieutenants. He is very smart in building a team of leaders with good composition of legal experts, organizational strategists, mediators, economists, local representatives and loyal fighters. This has proved to be a successful strategy for him so far. It alone may not work now.

When UML-Maoist alliance formed the two-thirds majority government and later merged into NCP, everyone was busy in analyzing likely scenario and strengths of the ruling party.

But the all-powerful party was challenged at the Election Commission questioning the validity of the party’s name itself. Rishiram Kattel-led NCP challenged Oli-Dahal-headed NCP for duplicating the former’s name. Kattel’s party hasn’t won a single seat in any provincial assembly or central parliament.

It took them months to settle the issue. They had to tweak the name twice to register it in the Election Commission and it was challenged in the court as well.

Another lesson for NCP: No individual or organization, no matter how powerful, can do everything merely based on numerical strength.  Even small factors emerge as big challenges.

New challenges
Now the biggest headache to Prime Minister Oli seems to be Dr Govinda KC, who has been fighting for reforms in health and education sector. Opposition party leader Deuba should have been one. But, it’s Dr KC.

Until some years ago, political parties were the only civilian forces who could relay information through their intra-party channel across the country at one go. With a single circular from the head office, political parties like NC, UML and Maoists could raise a movement across the country within hours or day. No other civilian forces were as powerful.

Now the digital revolution has changed the reality. At times, Oli seems very smart in grasping the reality of the changed context. He was the one who conducted an orientation to UML lawmakers on the importance of social media platforms in disseminating information to and building relations with the public. He cannot have forgotten how social media users supported his stand against Indian blockade of 2015.

Be it in forcing out Sher Bahadur Tamang from his ministerial post or fomenting public anger against the government’s failure to resolve Nirmala Panta’s rape and murder case, social media has become major pressure factor.

A text, photo or video posted on a social media by an ordinary individual may become more powerful than a report of a mainstream media. A single video of public defiance of President’s motorcade posted by an individual stirred up strong anger in March. Similar other clips have compelled the authorities to rethink their decisions. Ruling party looks bent on controlling social media use rather than addressing the grievances coming out from these platforms.

Despite having strong election mandate Pushpa Kamal Dahal’s tenure in 2008 was short-lived because, among other factors, he derided civil society, urbanites and middle class.

The governments led by Nepal and Khanal failed due to noncooperation from each other. Oli could withstand Indian aggression in 2015 because the party cooperated with him and people supported him.

Oli enjoys absolute power at the moment. Abraham Lincoln once said: “Nearly all men can stand adversity, but if you want to test a man’s character, give him power.” For Oli, now is the time to prove himself.

We have functional governments from local to federal levels. But a number of operational fissures have started to appear... Read More...