80-year-old Thuli Maya Sunuwar is up hours before sunrise and starts work much before many of us have even had our morning cup of tea or coffee. Her knees and back hurt, she has troubles with her sight, and she can feel her body slowly giving up because things she once did with ease take a lot of effort now. However, she continues with her regime, one she has followed for the last decade and makes her way to her small stall in front of the Tudal Devi Mandir in Bishal Nagar, Kathmandu. Throughout the day, she makes and sells what is arguably the best ‘aloo parathas’ (round flatbread with potato fillings) in the valley.

She comes to her stall at six in the morning, boils potatoes on the small gas stove, mixes the flour and prepares her special ‘chutney’ (pickle). Just the prepping bit takes hours, given her age. She peels potatoes, shreds them with a peeler, adds in an assortment of condiments (turmeric powder, ground spics, salt and chili powder) and mixes them in a large tub. She makes her ‘chutney’ in a pressure cooker that is filled to the brim with tomatoes, fenugreek seeds, green chilies, and water. This, she says, is a common recipe but, for people who come to her for her ‘parathas’, the ‘chutney’ is unlike anything they have had before.

Some of her first customers come in as early as nine in the morning. For them, she rolls a thin ‘roti’, adds a very generous amount of potato mix, folds the ‘roti’, and rolls them into thick ‘parathas’. She cooks these ‘parathas’ on the same pan she has used for years. Flipping them once in a while, adding a few spoons of oil, she makes a lot of these ‘parathas’ all day long.

But given the limitations that come with working unassisted and having just the one stove, it takes her a few minutes to make a single ‘paratha’. But her customers are more than happy to wait their turn, after all most of them travel from distant parts of the valley for her ‘parathas’. Some come to her from Bhaktapur, Pulchowk, and some even from Dailekh. “I have more people coming to me from different far off places than places around me. Sometimes, I even get calls from people who tell me that they came to know of me through the internet and promise to visit me soon,” says Thuli Maya with a beaming smile. 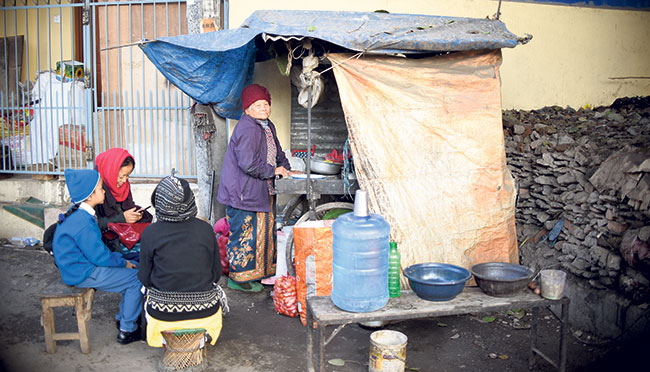 Thuli Maya has a small following on social media already and most know her as the kind looking lady who makes the best ‘parathas’. But life has never been easy for Thuli Maya and the situation hasn’t changed much over the years. Born to poor parents in a remote village of Ramechhap, Thuli Maya got married at the age of 13. Her husband, who was an alcoholic, took two other wives and never took responsibility of any of his wives or children. Thuli Maya had to earn her own living and raise her three children: two daughters and a son.

“Life was dreadful then,” she says. She recalls sleeping on public stone spouts staring at the flame of a lone candle, working at factories as a laborer and carrying large plywood pieces. Feeding a family of four was a constant struggle. So she came to Kathmandu in the year 1972, in her early forties, hoping to find a way to make life a little bit easier.

“That never happened. Not only was Kathmandu a new place, its ways were very different than what I was used to. Initially, it seemed that making a living here would be impossible, but after so many years of struggle everything was bearable and so I stayed,” she says adding that she worked as a household help for a well-off family but got fired soon enough.

With no means to sustain her family after that, she took to making some dry ‘rotis’ and sold them in her ‘doko’ (bamboo basket). People loved them and asked her to make more. Slowly, it dawned upon her that perhaps she could set up a permanent stall and sell ‘rotis’ to make a decent living. And somehow she managed to acquire a tiny stall soon after that. Today, she earns Rs 1000-1200 on a daily basis.

However, making ‘aloo parathas’ occurred to her late and that too only when a customer suggested it. With culinary knowledge based on years of cooking, she guessed what she would need and hesitantly started making them. Thuli Maya made her own ‘chutney’ to go with it too and while she thinks her ‘parathas’ are just like any other person’s, she makes them with generosity (attested by the large amount of filling). Anyone who comes to her goes back immensely satisfied. It’s been ten years since she started making ‘parathas’ and she plans on making them as long as her body doesn’t fail her.

For Thuli Maya, working for 12 hours straight, from six in the morning to six in the evening, is a compulsion. She lives in a slum and her son, who like his father turned out to be an alcoholic, is incapable of taking care for her. Her elder daughter passed away in Sikkim six years ago and her younger daughter is barely willing to support her. On most days, she doesn’t eat anything. All she has is an occasional packet of biscuit or a cup of tea and she has rice only once in a few days. Although she sells food herself, she admits to being unable to eat ‘rotis’ anymore, even the plain ones.

“Life has been tough but complaining will do no good. People who come here call me ‘aama’ and say that they love the food I make. I try to enjoy that. I have no other alternative,” she says. People around the area lend her a helping hand every now and then. Local shopkeepers deliver potatoes to her stall every morning. She wouldn’t have been able to handle carrying 16-18 kilos of potatoes that she requires everyday. Some stop by to have a chat and help her peel the potatoes. Some come bearing occasional gifts that she jovially accepts. Then there are those who look after her doctor’s appointments and those who visit her on mother’s day.

Eight decades of struggle and a string of unfortunate events might best describe Thuli Maya’s entire life but she says she is a happy woman today. “I get by with a little kindness from strangers and my own positive attitude,” she concludes.

ILAM, Aug 7: Minister for Agriculture and Livestock, Chakrapani Khanal, has held discussion with the tea farmers from Jhapa and... Read More...