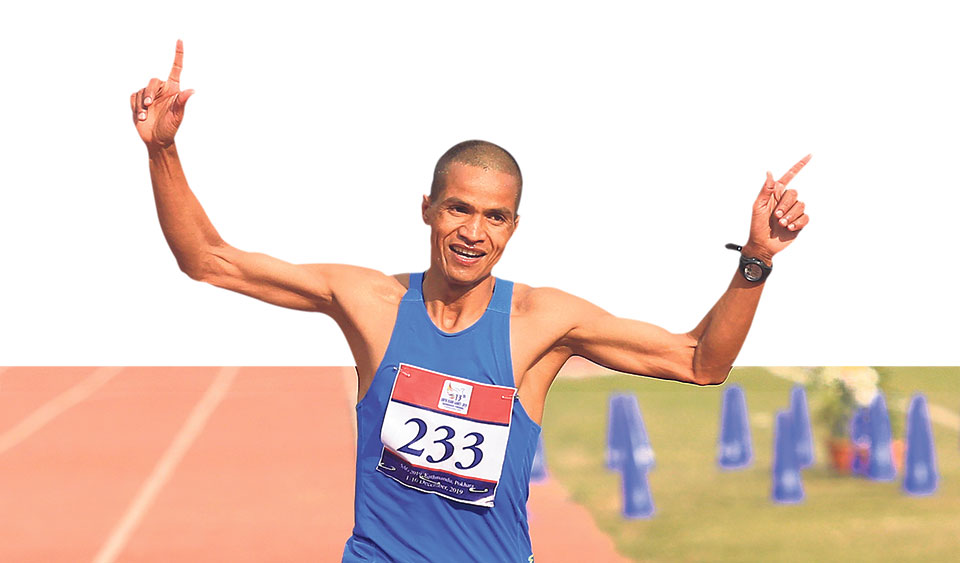 Kiran Singh Bogati smiles after winning the marathon in men’s category during the ongoing South Asian Games at the Dasharath Stadium on Saturday. Photo: Dipesh Shrestha/Republica

KATHMANDU, Dec 8: When the words spread that a Nepali athlete named was leading the race in men’s marathon, many were in utter disbelief.

The home crowd was doubtful about a countryman winning gold in marathon mainly because of Nepal’s failure to win a gold medal in marathon since Tika Bogati bagged it in 1995.

But, when Kiran Singh Bogati finally entered into the Dasharath Stadium through the main gate and into the racing track, loud and rapturous applauds reverberated across the stadium and the crowd jumped to their feet at his eventual success.

‘Nepal, Nepal’ roared across the stadium rather than anyone screaming Bogati’s name.

“This is the very first success of my career. This is my first gold medal in marathon,” he expressed. “I used to finish fourth, fifth and even sixth. I stood third in the National Games somehow,” recalled Bogati.

It was a stunning win for little-known Bogati, who was unfamiliar in Nepal’s sporting world until his dramatic rise to fame. He gives all the credit to runner Gopi Chand Parki, who on Friday won the gold in the men’s 5,000 meters run and has been guiding him.

All the credit to my success goes to Parki. He has been advising me since I started running and he taught me what to do in every step,” Bogati expressed his gratitude.

Bogati, who pipped India’s Rashpal Singh (2:21.57 hours) to a silver, is not done with this achievement.

“My target is certainly to better my timing in every tournament I compete in. I clocked 2 hours and 22 minutes in the first time, and now I have clocked 21 minutes. So, the main target is to better by own record.”

KATHMANDU, Nov 30: As the 13th South Asian Games (SAG) is just on the horizon, the National Sports Council (NSC) has... Read More...