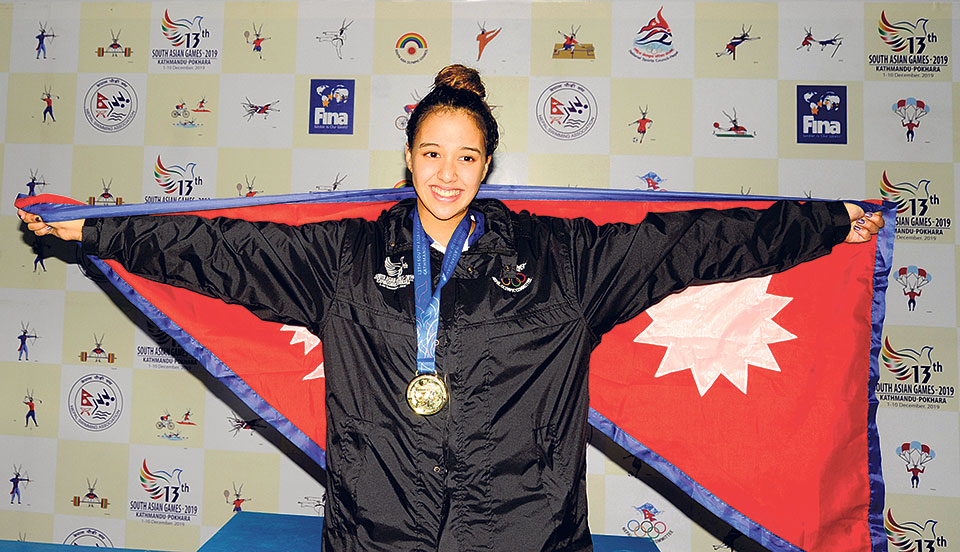 Gaurika Singh after winning the 400 meters freestyle final at Satdobato Swimming Complex in Lalitpur during the ongoing 13th SAG on Sunday. Gaurika became the first Nepali athlete to win three golds in a single SAG. She has yet to comepte in two categories Monday. Photo: Keshab Thoker/Republica

KATHMANDU, Dec 9: Gaurika Singh has eclipsed the record of all other Nepali athletes in the South Asian Games (SAG) with her medal haul in the ongoing regional sporting extravaganza. She has achieved the feat of becoming the only Nepali athlete to clinch three gold medals in a single edition of SAG.

She won a gold on Sunday in the women’s 400 meters freestyle, finishing ahead of India’s Shivangi Sarma and Sri Lanka’s Ramudi Nulara Samarakoon to take her tally to three golds.

Singh completed the distance in 4:25.28 minutes, improving her own previous national record set on May 15 this year. Likewise, Sarma took 4:26.22 to finish second, while Samarakoon won bronze with a timing of 4:41.91 minutes.

Unaware about her record, Singh expressed her delight of winning three gold medals in a single edition of SAG.

“I feel very good to win three golds in a single edition of SAG and more so to become the first woman to do so,” Singh said, adding, “More and more women should be encouraged to play sports. The fact that I am an inspiration to other girls in the country is a matter of pride for me.”

On Sunday, she also added one more silver to her overnight tally of a silver medal, by securing second-place finish in women’s 50 meters backstroke. In doing so, she also broke another of her national record.

She finished second with a timing of 29.71, less than a second behind India’s Manna Rajiv Patel, who clocked 28.94 seconds.

She added that she did not anticipate winning three golds and the emotion was overwhelming.

“I can’t describe my feelings. I feel very proud for my country,” said Singh.

Singh has outshined the likes of Deepak Bista and Baikuntha Manandhar, who are household names in the Nepali sports fraternity. Bista has won a total of four gold medals in SAG over a span of 11 years, winning a single gold in four editions each. Likewise, Manandhar has three gold medals under his belt from three editions of SAG.

With the South Asian Games (SAG) over, it is high time we reflected on the achievements of Nepal and started... Read More...