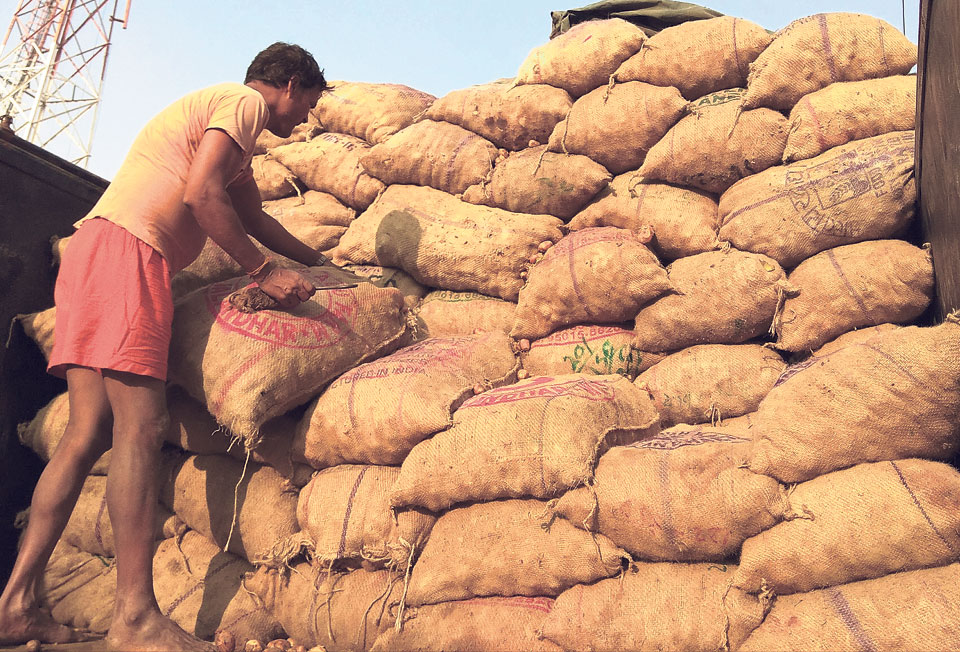 BIRGUNJ, Dec 5: Potatoes stored at cold stores in Birgunj have failed to find market, causing losses worth millions to farmers and traders. Potatoes brought from the hilly regions of Nepal and imported from Punjab of India dominated the market during September and October when the potatoes in cold storage facilities were supposed to hit the market.

The stockpiled potatoes are being sold for Rs 4 per kilogram, while the wholesale rate for imported potatoes stands at Rs 30 and the retail price at Rs 40 per kilogram.“

"The rent of storing potatoes is Rs 5 per kilogram. We had paid Rs 10 to 12 per kilogram to buy them. With this, our investment in a kilogram of potato has touched between Rs 16 and Rs 20 after deducting rotten potatoes. However, we have been compelled either to discard these potatoes or sell them at a lower price," said Aniruddha Prasad, a local trader.

"People are willing to pay higher price for new potatoes rather than old ones," added Prasai. "Potatoes brought from the hills were priced between Rs 45 to Rs 50 per kilogram. However, it has fallen to Rs 40 per kg after supply of potatoes increased with the arrival of potatoes from Punjab, India.

"Potatoes from the hills entered the Birgunj market earlier than expected this year, forcing local farmers to store them," said Radha Kant Singh of Laxmi Sabji Bhandar. "As the demand for Nepali potato decreased, around half a dozen wholesalers imported potatoes from Punjab," added Singh, who was unloading nearly 15 tons of potatoes imported Punjab at his go-down.

Districts like Bara and Parsa are considered as hubs for potato farming. Potato productivity stands at five to six quintal per kattha of land.

KOHALPUR, June 3:People involved in the trade of rosin and turpentine raw materials are facing huge losses this year as... Read More...

BIRGUNJ, April 18: Wheat farmers of Parsa fear that they will not be able to recover even their cost of production... Read More...

BIRGUNJ, Aug 5: Traders of Birgunj on Thursday held a discussion with officials of Visakhapatnam port aka Vizag port on... Read More...